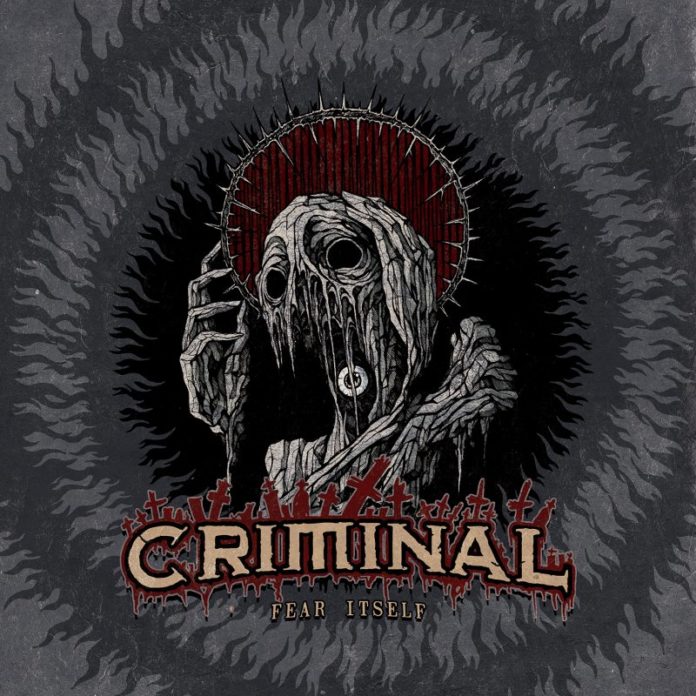 The latest album to come from the Chile/UK group of Criminal, Fear Itself, is their first with lead guitarist Sergio Klein, who joined them last year before they resigned with Metal Blade. It’s also their first album since 2011’s Akelarre, so with half a decade of hiatus behind them, there’s some natural curiosity about what form they’ll use to make their return.

After a low-mixed intro track (surely designed to make the unwary turn up their speakers), Criminal launch into a blend of death and thrash, taking cues from tradition and modern takes while injecting some hardcore punk attitude via the vocals and some of the drum rhythms. There’s also some social commentary, a natural inheritance from their musical heritage, expressed in ways spanning the hawkish lyrics on to track-opening samples, as with the famous lines regarding the military-industrial complex from Dwight Eisenhower which inaugurate “False Flag Attack”.

More than any other band in their bailiwick that I can call to mind, Criminal succeed in bringing the awareness and riff-set of ’80s thrash back to life without it seeming musty or forced, and their identification of Exodus, Carcass, Napalm Death, and Sick Of It All as their primary influences seems perfectly earned. The songs are kept quick and punchy, with neither the solos nor the main riffs dragging on too long, and while there’s just one that stretches itself past four minutes (“Scream of Consciousness”, if you were wondering), the songs generally throw enough variety into their hammer-down beats to keep from blurring together. The tracks’ titles can be a little loftier than their music delivers (“Summoning the Apocalypse” being a prime example), but that indulgence in imagery is hand-wavable as just another way in which the band stays true to its roots.

At the same time, it can be hard to hold on to any particular riff in your mind before the next track comes and sweeps it away, so it’s one of those albums that requires several listens before it’ll lay down hooks in memory beyond a general impression of ‘yeah, I liked it.’ As long as you’re not too picky about your metal, though, it should provide a pretty satisfactory experience and prime speaker-blasting material. Word of caution: if you’re planning to headbang along, stick to the slower pulses or be prepared to throw out your neck.

IN A NUTSHELL
Pretty solid punky death/thrash, emphasis on the thrash
POSITIVES
Lively work from all players
'80s homage as a garnish instead of the main serving
Very little flab
NEGATIVES
While it's not a glaring fault, having just one 'long' track does make it feel as though some opportunities for exploration were missed or left on the cutting-room floor
4