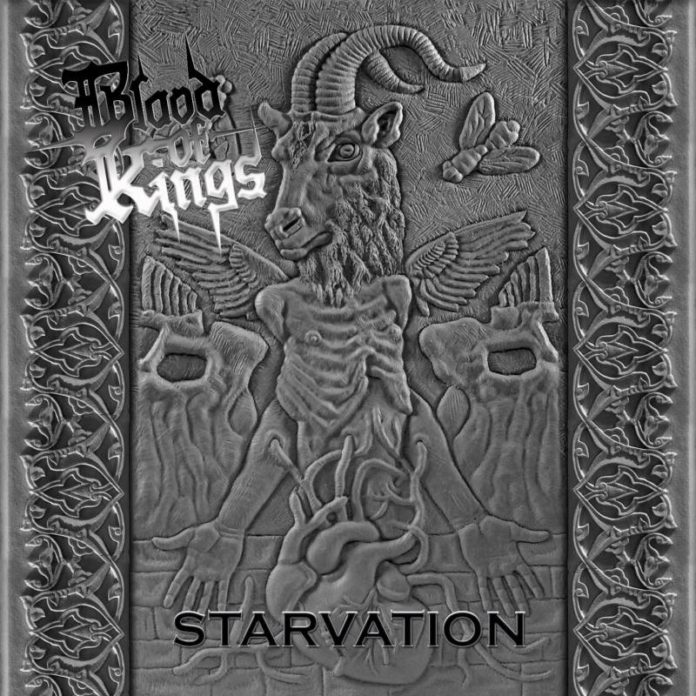 In the review I wrote for the recent re-issue of Manilla Road‘s Mystification, I talked a bit about how it’s important for up and coming traditional metal bands to remember that they have more options than to sound like Iron Maiden or Mercyful Fate: bands aping those two legendary groups already flood the market and it’s never a bad thing to stand out in the crowd.

It’s been a few weeks since I wrote that and I’m listening to the debut album from Seattle’s Blood of Kings. Officially released last year, it has now been re-issued on Tridoid Records, and it really is a breath of fresh air. It blends liberal doses of neo-thrash with a kind of New Renaissance aesthetic.  ((An independent record label based out of LA in the 1980s,  was owned and operated by Anne Boleyn of Hellion. It was was home to a multitude of bands including At War, Wehrmacht and Savage Steel among others.)) Everything is fast, loose and raw, and the album is better for it.

Guitarist Nick Paul and bass guitarist Pete Yore share vocal duties and at least one of them is a dead-ringer for Living Death‘s Thorsten Bergmann. Make of that what you will, but the voice fits the tunes. The lyrics aren’t always intelligible, but the delivery is frantic and blood thirsty, full of conviction but lacking restraint. In other words, for all the criticisms one could level at the vocals (for a lot of folks, the first one would be that aforementioned similarity) they are never boring and always engaging.

The raw production style is actually a huge plus as it gives the album its own flavour (another thing I’ve probably talked about with other albums). The first thirty seconds or so sounded pummeling and percussive like a Hatebreed demo before the central riff of opening song “Flat Line” kicks in and confirms the band’s more old-school metal allegiances. It’s certainly not a clean recording, but it doesn’t have to be. It’s fuzzy and muddy and brutal and more enjoyable for it.

While Starvation is certainly really enjoyable as a whole, I couldn’t give you many specific parts that felt memorable. It’s a pulsing, violently fun mess of an album but no single track really sticks out above the pack. The title track’s chorus uses a massive guitar hook that couldn’t possibly go unnoticed, but outside of small moments like that there’s not much for the listener’s psyche to really latch on to. With that said, anybody with a pulse is going to be headbanging along and not really paying attention as individual songs zip by, adding to the putrid smear that is the album as a whole. When you play fast, chaotic, fun music like this, sometimes an album is enough, and individual tracks don’t matter as much.

This is a fun record and one that sticks out by not being squeaky clean. It’s filthy, it’s bass heavy, and it has a mild-psychotic braying over top of it. Sometimes, if you’ve got a brew like that, you don’t need memorable songs to make a fun, compelling product.