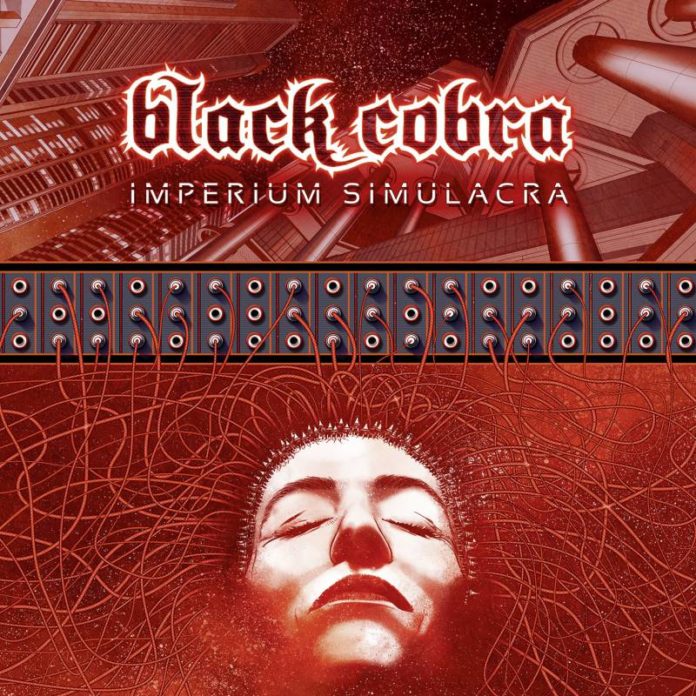 Since its birth in the late 60’s to early 70’s, heavy metal has essentially been about volume and the power of the almighty riff, and that’s how two-piece Los Angeles sludge outfit Black Cobra have managed to make it to the 15-year mark. Since forming Black Cobra in 2001, guitarist/vocalist Jason Landrian has laid down some of the loudest and most memorable riffs this side of Sleep’s Holy Mountain. Joined by ex-16/ex-Acid King drummer Rafael Martinez, Black Cobra have toured relentlessly, and released 4 albums that ANY sludge fan should have in their collection.

This year’s Imperium Simulacra marks the longest gap between albums in the band’s history, following 2011’s awesome Invernal, my favorite metal release of that year. Black Cobra have often been compared to fellow sludge metal warriors High On Fire, which isn’t really too far of a leap. One thing that really set them apart from the rest of the crowd, though, is Jason’s relentless torrent of riffs throughout each track. Imperium Simulacra is no different, with one killer riff after another, making this a thoroughly enjoyable listening experience. Building on the black metal tinged sound heard on Invernal, Imperium Simulacra breaks right out of the gate with the fast “Challenger Deep.” Jason’s vocals have always reminded me somewhat of Al Jourgenson of Ministry, though with a little bit of a hardcore edge. It matches the music perfectly, acting as a metronome to allow the listener to keep up with the often odd time signatures. “Fathoms Below” is a particular favorite track, with one of the most doom-sounding riffs in the band’s history, giving High On Fire/Sleep’s Matt Pike a run for his money.

The production on Black Cobra’s records have always impressed me, managing to make two instruments sound absolutely massive. There is no bass guitar present whatsoever, but the low-end on the guitar and the chuggy nature of the riffs is beefy enough that you don’t really miss the bass. The reverb on Jason’s vocals (which again draws comparisons to Ministry) is still in full effect, and matches the mood of the music perfectly. “Obsolete” is a pretty explosive track that does a great fade-in of the guitar before the drums kick in and everything gets turned up to 11. The most impressive thing about this band is that what you hear on the record can usually be done live with very little difference in sonic clarity. The cymbals are a bit heavy in the mix, though, giving the overall sound a slightly muddy tone, but in a way, that’s part of Imperium Simulacra’s charm. Far from sounding super clean and lifeless, this album has a gritty feel, even on the melancholy lone guitar at the beginning of “Dark Shine.”

Black Cobra are the type of band that never overstays their welcome; you get a cool riff, play it out for a bit, and just before it gets monotonous, you get another cool riff. The time flies by listening to their albums, and Imperium Simulacra is no exception. If you’re a fan of this band and don’t have this record yet, remedy that immediately! If you’ve never heard them, this is just as good a place as any to start, especially if you like a little Yob to go with your High On Fire.

IN A NUTSHELL
Black Cobra have managed to set the bar high yet again for the rest of the underground sludge scene with this latest offering
POSITIVES
Great mixing
Tons of killer riffs
Some nice changes of pace throughout each track
NEGATIVES
Cymbals are a bit high in the mix, making the tone a little muddy
4.5