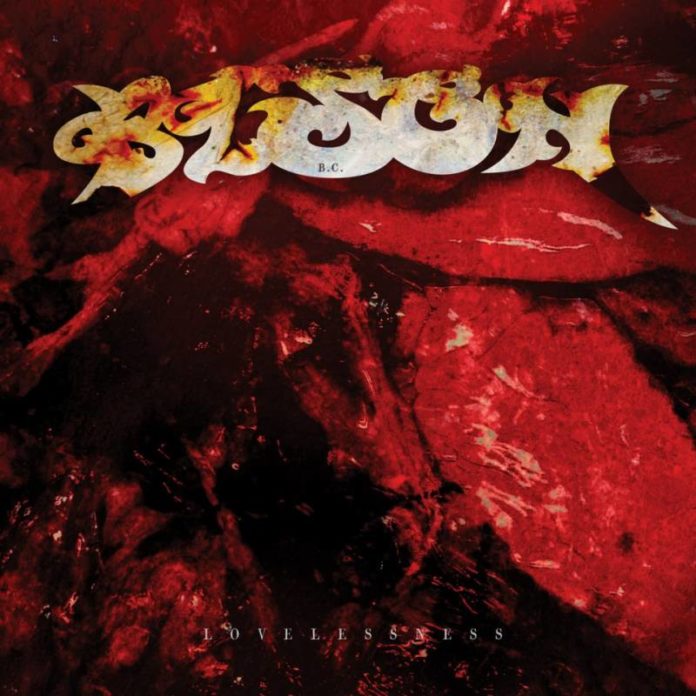 Wow, Bison B.C. sure has been busy since they formed in 2007 huh? With four releases in five years, they’ve been getting better and better with each one. So it’s not exactly a stretch when I say that Lovelessness is their best piece of work to date; although it probably won’t win over many undecided listeners.

For those of you who are not familiar with Bison B.C., expect plenty of gritty, thick leads, bombastic riffs, and a spaced-out feeling. It’s worked well for the band in the past, and they’ve really amped it up in Lovelessness. I mean seriously, just check out the opening to the album itself – “An Old Friend” isn’t some shitty “intro” track, or some half-assed piano interlude. Nope, it’s like your uncle teaching you how to swim by just pushing you into the deep end; only this time it’s fucking awesome. Lovelessness certainly knows how to start off an album the right way, but that doesn’t mean it’s smooth sailing all the way through. There are stretches – short stretches, but nonetheless still short periods in time – where the music fails to capture you and lets your mind wander a bit. Take, for example, the song “Anxiety Puke/Lovelessness”. There’s a stretch near the beginning of the song that’s about a minute long (almost exactly a minute long, actually) that almost always makes me lose attention. Of course, in true Bison B.C. fashion, they swoop in to save the show with a sweet-ass change of pace riff; but it should never have to even get to that point.

That’s okay though, because for the most part Lovelessness knows how to keep it’s audience’s attention. Vocalist James Farwell’s performance is absolutely stellar; his voice is a near-perfect fit for the style of music and production that Bison B.C. apparently aimed for on this album. Anyone who’s a fan of early Mastodon or Baroness will feel right at home listening to Bison B.C. As a fellow Metalblast  reviewer put it: it’s like if Mastodon never got out of their Leviathan days. I think most of you guys would be perfectly okay with that, right? Right.

Guitarist’s Dan And (yes, that’s his real name) and James Gnarwell wrote some absolutely killer, catchy riffs for this album. Seriously, I can’t get the main riff from “Blood Music’ out of my head and it’s been like six days now. The production on this album is also very good; I don’t know who produced or mixed it but they did a great job. Lovelessness has a sort of retro sound that invokes warmth and a spacious soundstage; check out the outro to (again) “Blood Bath” to get a sense of what I’m talking about. For the type of music they play, the production really adds to the overall experience. This is one of those rare instances where you can note the production and say that it changed the album for the better. It’s actually quite refreshing. Lovelessness sounds great on speakers, or a nice pair of headphones.

I actually liked Lovelessness a lot more than I thought I would; Bison B.C. really is improving with each release (and at the rate they release albums, it won’t be long until they release something truly killer if they keep up the trend). If you’ve heard Bison B.C. before and weren’t a fan, this album won’t win you over. It’s the same formula that they’ve used in their past albums, only more polished. Really, my biggest disappointment is that it feels so god-damn short. Seriously, it feels like it’s over before it began which is a huge bummer.