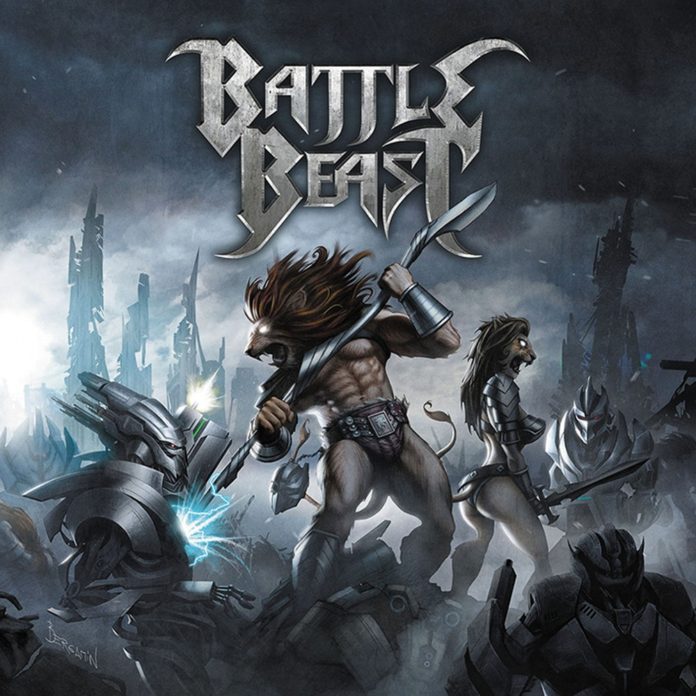 This is not dissimilar to what I was talking about in my review of the new Crystal Viper album: Tough as nails female fronted true metal. But while Crystal Viper takes obvious inspiration from Manowar, Jag Panzer and other American units, Battle Beast is much more squarely Germanic in their attack, recalling more than anything the militaristic swagger of Accept.

The album opens with one of it’s more power metal-tinged songs in the galloping, keyboard laden “Let It Roar”: a great, punchy, powerful song that doesn’t give too much away (i.e.: a great song you’ve probably heard before). “Out of Control”, however, is the album’s first really strong entry, showing off new vocalist Noora Louhimo and her talent not just with regard to her voice itself, but also with using it to create different dynamics in the song. She has great, soft cleans, rough and ready yells and growls, and know exactly when and how to use both.

Credit for the album’s success must go in part to keyboardist Janne Björkroth, who, much like Noora, is an expert at using his instrument to create effective dynamics within a song. His tasteful chops are on display in “Raven”, where he plays low, understated, but ever-present, popping up in the chorus as an accent that turns an otherwise good section into a great one.

The jewels of the album come right smack in the middle: “In the Heart of Danger” is a slab of Warlock level grandeur, recalling some of that band’s epics from the True as Steel and Triumph and Agony albums, while “Machine Revolution” takes rhythmic cues from techno but keeps things heavy with great drum work and strong riffs. Anton Kabanen is a great guitar player who pulls some great riffs out of his bag and has no shortage of flare come solo time.

I can only say one truly negative thing about this, and it’s a mistake that a lot of bands in this vein seem to make: the pace never varies that much. I firmly believe that a little bit of speed can open up a power metal album a lot. While this album is already an incredibly competent work all around, a speed metal tune would have really fleshed things out and given it just that little bit extra. Power metal bands: speed can be your friend!

Battle Beast is nothing more than a great band in the making. While I don’t think they’ve succeeded in creating a sound that is unique to any great degree, I do feel like they are well on their way. These are songs that never get boring, are consistently powerful (thanks in part to strong, well balanced production), and work well together as a consistent, cohesive body of work. This is a band to watch in the coming years, as I think they have potential coming out of their ears. Nuclear Blast has hit it out of the park by signing these fins.