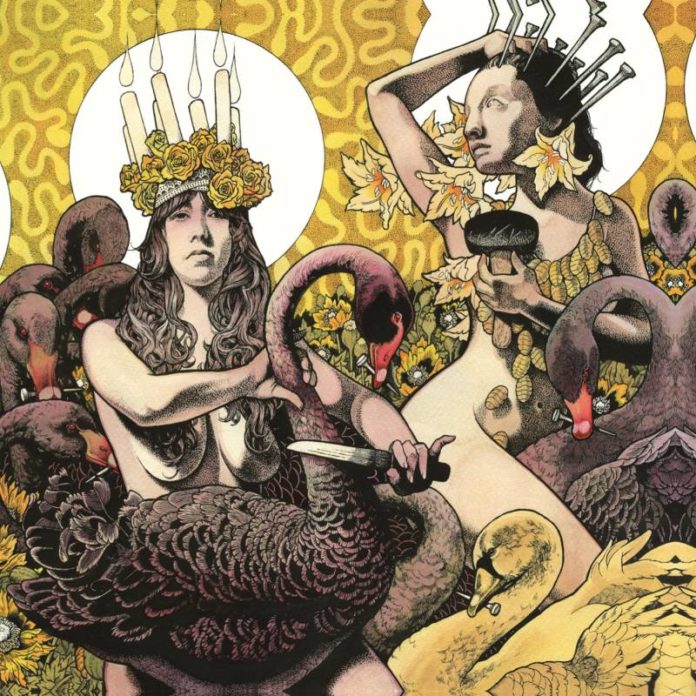 What’s with metal bands easing up on the heavy lately? First Opeth put out Heritage, where they dropped the death metal (and, if the internet is any indication, a good chunk of their fanbase as well). Then two of my favorite bands, Cynic and Cloudkicker, released their lightest material yet last November, and their extreme-ness is in real jeopardy. The new Baroness double album, Yellow & Green, follows the trend. I’ll admit, I never really “got” Baroness – sure, I had seen them a couple of times opening for larger tours, but I had never understood all the ranting and raving about them, though I did enjoy their music on some level. Despite my state of apathy towards the band and the softening of their sound, I found plenty to enjoy on Yellow & Green, though, like many double albums, it does suffer somewhat for its length.

The album begins with the Yellow disc, which was my favorite of the two. It hits a little harder and comes closest to the traditional Baroness sound fans are familiar with, and it kicks off (after a short intro) with “Take My Bones Away”, possibly the strongest song on either disc. It’s lively, catchy and melodic, with plenty of parts prime for singing along in a live setting. The spider web of guitars in “Little Things” gives way to a dance beat that at first catches you off-guard but eventually feels exactly right. “Twinkler” sounds like a coal miner’s anthem, “Cocainium” could be an unearthed Pink Floyd track circa The Wall, and “Eula” closes out the first disc in theatrical, evocative fashion – Baroness could probably score movies if they can write more songs like this. The only real dud is “Back Where I Belong”, which runs too long and fails to engage or be memorable. As a whole, though, Yellow is pretty killer and a very natural evolution of the Baroness sound after Blue Record.

Green is lighter and more experimental, and as a result is a bit of a mixed bag. Maybe it’s just because Yellow stormed out of the gate with “Take My Bones Away”, but “Board Up the House” is pretty much music for smiling while driving to the beach by comparison. Even for new, lighter Baroness, it’s still a little beyond the pale for me. Fortunately the band immediately makes a recovery with “Mtns. (The Crown & Anchor)” and does a decent job keeping it up, with the exception of “Collapse”, a plodding, pointless track, the kind of track every double album has one or two of. “Stretchmarker”, though, is a lovely instrumental featuring the kind of fingerpicked acoustic playing the band have made their signature, and “If I Forget Thee, Lowcountry” is about as good a closing track as Baroness have ever written. Although weaker than Yellow, Green certainly has its share of strong tracks.

Yellow & Green will likely disappoint those looking for something extreme, but Baroness fans and alt-rockers will have a blast. In the age of iTunes, it’s the rare double album that you can purchase as a whole without regret, instead of just picking and choosing tracks online. They may have lost the feeling of running wild they had on Red Album, but they certainly haven’t lost their knack for pure tunefulness.