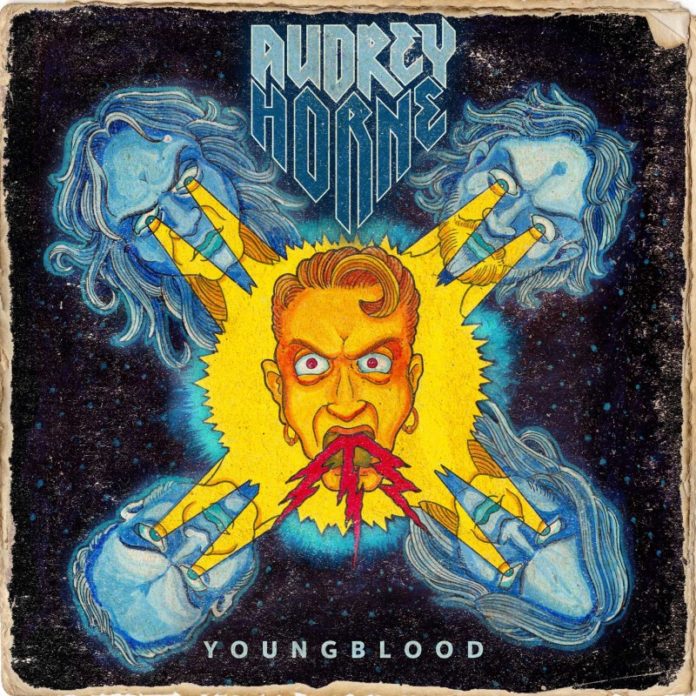 It’s safe to say that 2013 is off to a very good start.  With Audrey Horne‘s latest release Youngblood, it’s seeming more and more likely that this year is going to be in for one heck of an ass kicking. Youngblood is a tightly honed album, full of NWOBHM, 70’s hard rock, and 80’s metal influences that will have  you banging your head and singing the chorus to a song you’ve never even heard . And though they are a relatively new band, the album is marked with expert musicianship. It may not be in a Dream Theater “musicianship” sort of way, but Audrey Horne can write a catchy guitar lick like nobody’s business; Youngblood is full of melodies and harmonies that will be stuck in your head for days to come. And though the album is not without faults, it’s easily more than strong enough to overcome any minor quibbles.

It’s hard to describe the sound of Audrey Horne, such an intricate mix of genres both new and old is a rare find. Regretfully, the only commonly known title that loosely fits is that of alternative metal. That pigeonholing couldn’t be more off; in Youngblood, the influences of Thin Lizzy, Steppenwolf, Diamond Head, Iron Maiden, and even Pantera are all combined in a potent mix that rivals any other band out there. Most of the times bands struggle with only one genre of music and with the ill advised combination of a second, it can lead to such a catastrophe that leaves you reaching for a .45. Part of the reason for repetitive records (apart from lack of talent) is the inability of musicians to grasp and respect the very genres they delve into. This leads to a lot of half-assed LPs and singles that artists, should they be so lucky to survive, pretend never happened.  Part of the joy of Youngblood is the sheer expertise of the musicianship; it becomes apparent this album is the work of musicians that have masterfully poured over records both old and new, adding in their own ideas and then hitting the studio.

And though some songs bear a resemblance to others, like the riff for “Cards with the Devil” bares a striking similarity to Pantera‘s “Psycho Holiday”, most of the songs only contain stylistic similarities to other bands and only help Audrey Horne to get the ball rolling. Furthermore, the actual songs Audrey Horne craft are of premium grade; Youngblood is a prime example of “All killer, no filler” since every song rocks and would be worthy of having it be the title track. Mildly put, Youngblood grabs you by the hair and commands your attention.

Unfortunately, the near flawless execution is marred (if only slightly) by the careless production around the drums. Instrument wise, everything else is fine; the guitars are chunky and crisp and the bass clanks on and has a great bottom end. And though that may sound great like a compliment, that’s where the problem starts; more than once the bass guitar interferes with the bass drum and it even seems to drown it out. Otherwise, the drums are fine, they just lack any real definition in the bass kicks. It’s a shame that a silly oversight like that should hinder Youngblood, but it does. At best, the bass drums sound like someone punching a wet pillow, at worst they’re almost non existent. I seriously hope that the press got underproduced rushes and the public will get a more finely tooled product.

In the end, it’s no surprise that Audrey Horne are masters of their craft when past members have come from such esteemed acts as Enslaved, Gorgoroth, and Sahg. Youngblood is an expertly crafted taste of metal that is old at heart but modern in application. If this album doesn’t get insane amounts of media attention, it’s nothing short of a crime.

Riot Horse – This Is Who We Are