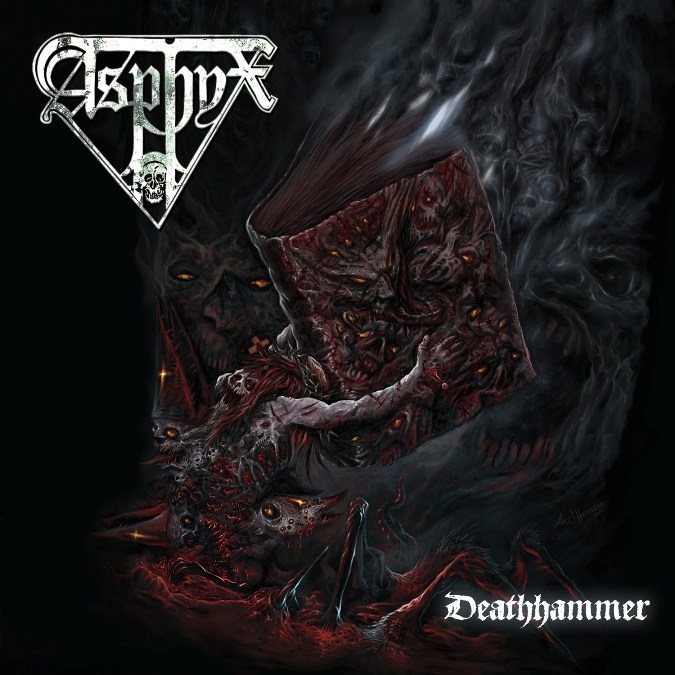 There are a lot of bands that had been broken up for a long while after a fruitful career, but decided that their run wasn’t over yet, and had resurrected their legacies.  Some had continued to be strengthened (Autopsy‘s “Macabre Eternal,” Exhumed‘s “All Guts, No Glory,” and Amebix‘s “Sonic Mass“) and some were catastrophically damaged (Terrorizer‘s “Darker Days Ahead,” Startovarius‘s “Stratovarius,” and Nuclear Assault‘s “Third World Genocide“), so it really has been a toss-up when a beloved band has decided to crawl out of its metaphorical casket.  Asphyx was a group that had been brought back from the dead in 2007, and had to face a large amount of scrutiny that had been directed at them.  In response to the harsh assumptions and criticisms the band had received, they released a vicious comeback album in the form of “Death… The Brutal Way” almost three years ago, bludgeoning the naysayers with a sledgehammer.  There was no question that Martin van Drunen and Bob Bagchus were back to their old tricks in wanting to bring forth a visceral and dominating death/doom metal album.  Here I sit with a copy of their upcoming album, “Deathhammer,” and if there’s one thing that I have known about Asphyx throughout these years, it’s that they were never about trying to deceive people with album and song-titles; they were blunt and truthful about what you were going to get.  After a terrific display of old-school death/doom metal on “Death… The Brutal Way,” I can safely say that my expectations are pretty high for “Deathhammer.”

The entire concept surrounding “Deathhammer” is how Asphyx as a whole believes how death metal should be played and respected, and that not nearly enough bands or even fans of the sub-genre understand that.  In this day and age when everything is driven by a bottom-line, the art that we all know and love has suffered tremendously at the hands of greed, where a label or band would much rather put out material that they know will not only guarantee them a high amount of sales, but they will make sure that the music is not in the least bit threatening or provoking in any manner.  This is what Asphyx hopes to correct with “Deathhammer,” with the band being judge, jury, and executioner in deciding who can continue to flourish and play within the confines of their beloved sub-genre.  Wanting to put art above money is a novel concept, yes?  As somebody who subscribes to an extremely similar ethos, I was more than prepared to have my ass handed to me on a silver platter.

Asphyx has no issues with throwing you into the deep end immediately when the openers ‘Into The Timewastes’ and ‘Deathhammer’ come on with a frantic mid-paced death metal attack.  It’s pure Asphyx through-and-through, and you know this once Paul Baayan’s sharp riffs and Martin van Drunen’s piercing wail are launched at you.  It is an excellent barometer for realizing what you’re going to be getting through all ten tracks of “Deathhammer,” especially since it is the trademark Asphyx sound; old-school death/doom metal.

For those of you who are unaware of Asphyx‘s sound, they normally have two speeds: slow, depressing and debilitating somber tones, or a mid-paced Panzer hell-bent on crushing everything in its path.  The way the track-listing is set up is flawless, in it gives you a perfectly spaced out experience from having one of their faster songs, such as ‘Deathhammer,’ and then being treated to the devastatingly heavy and droning funeral dirge of ‘Minefield’ directly afterwards.  It’s that type of reasoning that makes “Deathhammer” feel so fresh and satisfying, because while there is only one instance of two of the same styled tracks doubling up, you are given their two distinct styles one right after the other.

While the ‘faster’ songs are composed very well, the real gems on “Deathhammer” are the slower tunes, such as ‘Minefield,’ ‘Der Landser,’ ‘We Doom You To Death,’ and ‘As The Magma Mammoth Rises.’  We all know that they are going to be ridiculously heavy, which is very true, but there is just a certain way the songs carry themselves that gives it this atmosphere of cataclysmic despair when everything in Asphyx is working together.  This is what we would expect from the band, but it seems like they took that expectation and exceeded it tenfold.  Paul’s short and haunting melodic licks are razor-sharp and go straight for the jugular.  Bob Bagchus is far from the most technical drummer out there, but these are the tracks where he shines, even if he is just keeping a simple beat.  He just seems to be ridiculously in sync with whatever Martin or Paul have thrown at him, and it is given an extra boost with the devastating modern production.  Alwin Zuur’s bass also makes a huge impact on these tracks, as well.  In the faster songs it isn’t as noticeable, but you can clearly hear his influence in the slower songs; a juggernaut trudging through a war zone, if you will.

The only real issue I can see with “Deathhammer” is that some parts of the faster songs may feel like they are blending into one another, and you’re not exactly getting that variation that one would hope for.  I can see that being a bit of a problem for most people, but I personally felt that there was far too much good material within “Deathhammer” for it to do any significant damage to the replay value.

The production values of “Deathhammer” are nearly identical to “Death… The Brutal Way,” so if you enjoyed it on that album, then you will feel right at home here.  The bombastic tone of everything on this album is incredible and perfect for the Asphyx sound.  I normally wouldn’t say not to play an album too loud, but seriously, I wouldn’t play “Deathhammer” on any real serious sound systems on too high of volume for fear of blowing out the tubes in your speakers.  Hell, even Martin had to take a break from listening to the mix because it was giving him a headache.  If your mix is so god damn heavy that Martin van Drunen has to take the rest of the day off, then you have discovered the Holy Grail, my friend.

“Deathhammer” is pure Asphyx as we would like to know and love.  There is absolutely no unexpected changes to the formula that works so well; just pure old-school death/doom metal for 47.5 minutes of your worthless life.  If you come into “Deathhammer” expecting anything else than what we are used to with Asphyx, then you are going to hate this album, and it will be your own damn fault.  Asphyx was never about trying to push the limits.  They were always about having fun and doing what they did best, and that is keeping a predictable-yet-fresh take on mid-paced death metal.  “Deathhammer” is a very worthy successor to “Death… The Brutal Way” and makes sure to keep the legacy of Asphyx intact.  If you are familiar with the way of this band, then you will love “Deathhammer” as much as I did.