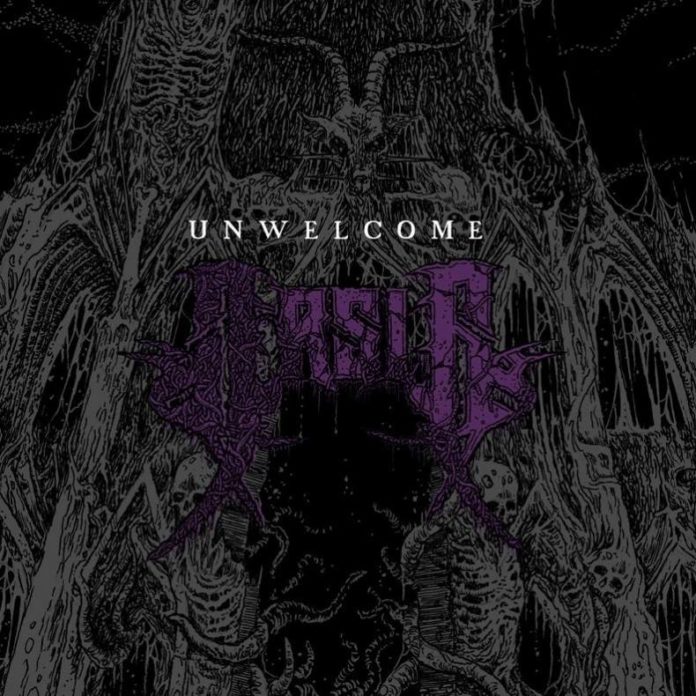 All art – be it visual, film, music, whatever – exists within the context of what came before. This is especially true for Arsis, whose debut album, 2004’s A Celebration of Guilt, is a melodeath game-changer that they’ve been struggling to match for the past near-decade. After delays, lineup changes, and mainman James Malone’s “real life” commitments tripping up Arsis, Unwelcome is being hyped as a return to form, their best work since Guilt. And, I mean…it’s competent, no doubt about that. But there’s not much here that sticks, and what does stick doesn’t exactly stick in a good way.

Maybe it’s a sign of the times; in a post-Necrophagist world (let’s face it, we’re firmly post-Necrophagist), a band blast-beating and sweep-arpeggiating nonstop isn’t exactly worth writing home about anymore, so when that’s most of what your band has to offer, you’d better be doing something special with it. Arsis gained early attention for their blending of tech-death and melodeath and, granted, in 2004 that was a pretty cool combination, but after three full-lengths that pale in comparison to the first one and the rise of tech-metal in the late aughts, we need memorable songwriting to keep our interest. And there are moments of that, like the opening vocal line and the ending breakdown of “Carve My Cross”, but for the most part Unwelcome features either unremarkable high-speed blast moments (every song) or just plain head scratchers (like the Motley Crue-esque solo section of “Handbook For The Recently Deceased” and the bridge of “Let Me Be The One”). Normally I love it when a band can catch me off-guard with something weird, but there’s times when it just doesn’t work. The only time it really does is the cover of “Sunglasses At Night” wedged near the middle of the album, but I’m not ashamed to admit that that song rules and I’ll gladly listen to it in any form, even as a clichéd metal cover.

I don’t want to be too down on Unwelcome, though; it does have some interesting moments. “Martyred Or Mourning” actually works in some interesting melodic lines and some riffs that don’t sound engineered to be as technical as possible. “No One Lies To The Dead” has some thrash in its DNA, resulting in some twisting riffs that harken back to a more traditional brand of melodic thrash/melodeath. Songs like these demonstrate that Arsis/Malone are capable of writing interesting songs, but the prospect of writing blasting shredfests leads the band towards doom like sirens leading sailors to the rocks. It’s a little sad to see talent squandered, when some of these songs show glimmers of promise and creativity, but they get buried under wankery. It’s no wonder these guys used to be on Willowtip.

All in all, Unwelcome doesn’t live up to the hype; while it provides some fun moments, it overall provides little more than an unchanging tempo, overwritten riffs and technicality in place of songwriting. If you’re looking for something to air guitar along to, I guess you’ve found it, but its style comes at the expense of substance.

The guy who wrote this article is a d-bag if he thinks this album is only good when it comes to certain riffs. As a long time arsis fan I was blown away by the shear monstrosity that is unwelcome. From beginning to end my ears were having a screaming eargasm! Too me the album was a blend of celebration and nightmare and it crossed paths perfectly. The album has that classical feeling like celebration, that feeling of despair that’s swallowed by hopelessness, and the fervor of a nightmare. I’d easily give this album a ten. And where was the… Read more »

Hi Jesse!
Reviews are inherently subjective, so it is understandable if you disagree with one of our reviewers.
Thanks a lot for checking our website and for your comments. Look around the site, I’m sure you’ll find something that you like.