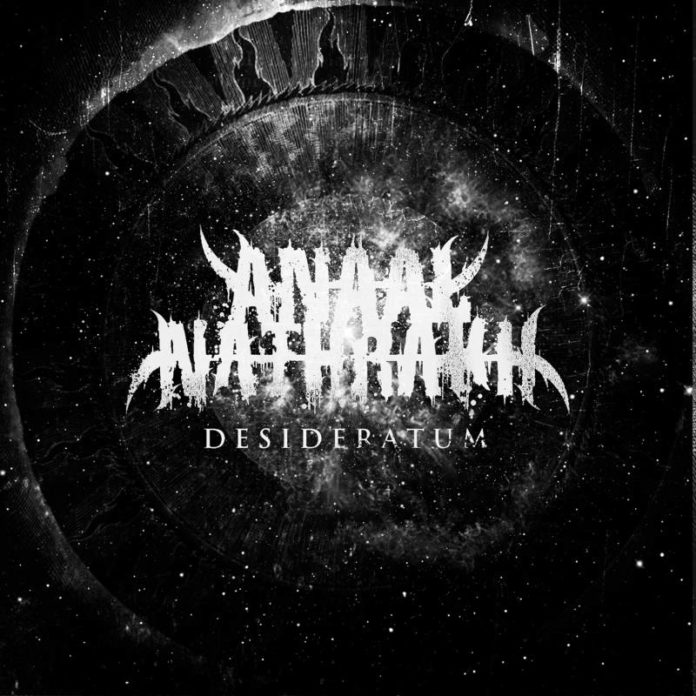 Ever since Birmingham’s Anaal Nathrakh burst onto the underground extreme metal scene in 1998, they have released some of the most awesomely pissed-off sounding metal this side of Napalm Death. Initially starting as a black metal project, Anaal Nathrakh have since incorporated elements of grindcore, death metal, industrial, and even metalcore; additionally, vocalist Dave Hunt has developed an impressively wide vocal range that contains elements of black metal shrieks, death growls, and even operatic clean singing in more recent efforts.

Desideratum is Anaal Nathrakh’s 8th full-length release, as well as the band’s Metal Blade Records debut. One thing that jumps out at you pretty quickly is the increased presence of electronics (thanks in part to the collaboration with British electronic music project Gore Tech), putting the band firmly in the industrial category, which might upset a few of the old-school fans. While the synthesizers are to be heard in abundance on every last damned track, the riffs are as intense as ever, though at times decidedly more groove-oriented. There are a few breakdowns throughout the album (“A Firm Foundation Of Unyielding Despair” has at least one in it) which made me grit my teeth a little, but they don’t really overstay their welcome, and are so few that I hesitate to label this Anaal Nathrakh’s dive into the metalcore world. “Idol” really stands out as a track that encompasses everything this album is about; industrial breaks, grind/black metal verse riffs, with melodic black metal style choruses that show off Dave’s impressive clean vocals (reminiscent of those Vortex used to do in Dimmu Borgir). While there is a bit more melody than recent efforts, make no mistake, Anaal Nathrakh have lost none of their venom; “Monstrum In Animo” still displays that mix of grindcore ferocity mixed with black metal nihilism you’ve come to expect from these angry Brits. The high-pitched shrieks are as painfully as shrill as ever, the volume of the music is absolutely earsplitting, and the song titles are just as hateful as ever (e.g. “Sub Specie Aeterni (Of Maggots, and Humanity)”).

Production-wise, the triggered drums sound a bit papery and thin on the kick-drums at times, but that’s really my only complaint, since everything else compensates with sheer volume. The guitars, bass, and vocals are all high in the mix, making Desideratum a pretty loud record, though when listened to at a high volume (like ALL your metal should be), you don’t get any audio-clipping or distortion. The various vocal tracks weave in and out in the songs seamlessly, but don’t make the songs sound too busy; Anaal Nathrakh have often had a “controlled-chaos” approach to song structure, but everything on Desideratum is a much more planned out and meticulous affair. The time changes come off as more purposeful, the transitions between styles much more smooth, and the overall layout of the album feels much more organized.

Desideratum isn’t a perfect album, and not even really my favorite by Anaal Nathrakh, but it shows a band maturing in their approach to songwriting, and is a step in the right direction. If they could scale back the electronics just a little, lose the breakdowns, and find a much more realistic sounding drum machine (if not a live and kicking drummer altogether), Anaal Nathrakh could really become kings of the extreme metal genre. Although the band has already built a die-hard fan-base, with a few minor adjustments there would be nothing left to stop them from world domination.

Rage hasn't been this catchy in a long time, though the electronics could be scaled back a bit
Impressive vocal range, seamless mix of styles, great mix of brutality and melody
Drums are a bit thin, electronics have taken a little too much focus in the mix and overall sound
4