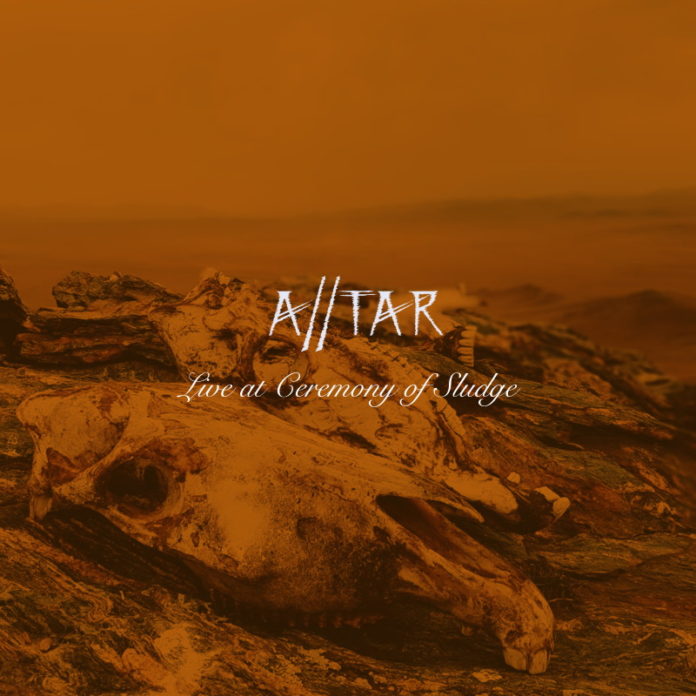 Though they only surfaced a little over a year ago with their debut Hallowed, Alltar are keeping their momentum strong. Despite their short career, they have this performance ready to go for your home-bound ears, having managed to really capture the power of a live performance in a way that many other bands have been unable to achieve. Given the current state of the world, and music venues in particular, a live album is both a welcome change and a strangely nostalgic item, even if the show isn’t very good. Thankfully, with Alltar, we don’t need to worry about that.

A nice slice of bass reverb leads listeners into the Alltar experience, with a little crowd hyping and enthusiastic response forming the “Intro” track. After that minute or so of warm-up, it’s on to “Arcana”, a track which hasn’t yet had a studio recording released by the band, adding a little extra value to the package for those who’ are already hooked on the band. Though this live album only has three ‘full’ songs (“Arcana”, “Cantillate”, and “War Altar”), the band makes use of atmospheric interludes to bridge them, making it all run together as a continuous ride, while strikingly distinct moods for each song keep things memorable. It might be because they have more rounds with it under their belt than the other tracks, but “War Altar” (originally from Hallowed) was my favorite, with a rise from moody brooding to ebullient release, and a damn hooky main riff to boot. It also benefits from being positioned right where the band has really hit their stride, without the need to pull it back in for the final tune, and the response of the crowd shows how killer it was in person.

When “Cantillate” (in case you don’t feel like pulling out a dictionary, it means ‘to chant’) rolls up for the closer, it does so with a tasty synthesizer intro, twisting distended and distorted drones into an arpeggiated chatter as the rest of the instruments kick into action. Caceres‘ vocals get their rawest workout here, howling in a blackened timbre that might make your own throat ache to hear it. Plenty of tempo and tone change-ups spotlight the group’s prog leanings, while keeping a hard edge evident even in the restrained sections, and delivering a powerful crunch when the stops come out.

Though live albums often sound terrible, that isn’t the case here. From the ribbed waves of the bass, to the peaks of the percussion, everything sounds crisp and clear, with enough warmth coming through their amps to make you feel nice and cozy as Caceres sings of doom and decay. When they slide to a jangly guitar solo, it rings out with enough acoustic oomph to make you feel like you’re right there in the cavern (assuming you’ve got your speakers properly pumped).

All in all, this album should whet the appetites of anyone who hasn’t yet seen Alltar live. Until concerts are once again a reality, there’s enough life and detailing on this album to hold up to heavy usage in lieu of bumping elbows in the pit.

Alltar – Live at Ceremony of Sludge
THE BOTTOM LINE
A great performance and an excellent showing from the band, well deserving of attention as 2021 gets into gear.
Reader Rating0 Votes
POSITIVES
Great fidelity for a live recording
Nuanced interplay
Solid grooves
Good vibes
Sharp song-writing
NEGATIVES
Too damn short, at just under half an hour
Less audience interaction than they could have gotten away with
4