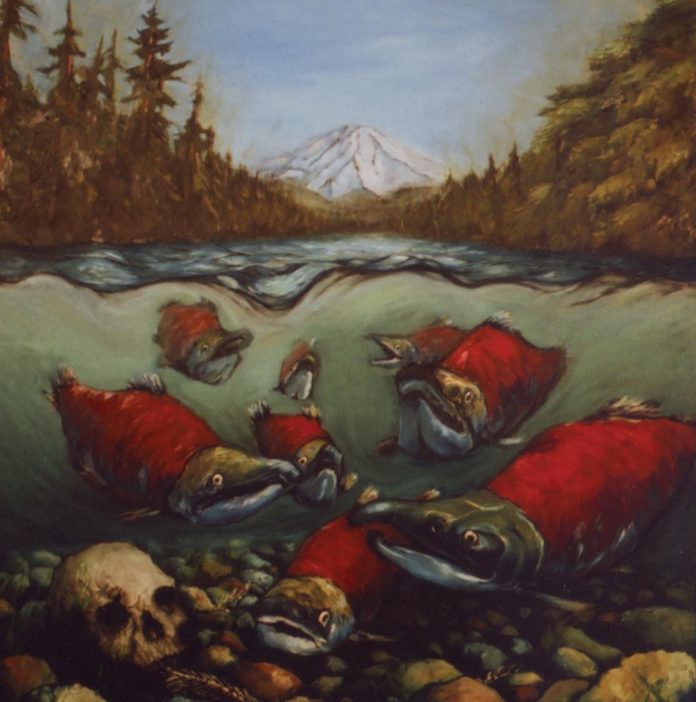 I like black metal. I would even go so far as to say that I like most types, subgenres and national variations of black metal. While I’m certainly a fan of the tr00, primitive Norwegian style, pioneered by Emperor, Darkthrone and co., to me that basic style of black metal always seemed like an exciting springboard for exploration and experimentation, something at which us good ol’ Americans have proven ourselves quite apt. Call it the prog dork in me, but incorporating different sounds, influences and genres into a black metal base has always excited me, and while my countrymen have found various flavors to inject in the genre’s frostbitten roots, Alda might be the first guys to make their take on BM feel distinctly American in sound, not just in composition. Between their album cover taking on a certain Louis & Clark feel and the first minutes of opener “In The Wake Of An Iron Wind” sounding more like a western serenade than a call of the wintermoon, Alda are interested in taking a blackened examination of the American landscape, and it’s a neat (and refreshing) thing to see.

A creative writing professor once told me, “People only say a story flows well if they have nothing nice to say about it.” But here’s what I say to that: Tahoma flows well, and I mean that; believe me, I have lots of nice things to say about this record. The danger many artists face when writing songs 10+ minutes in length is keeping the listener’s attention-this is especially true for black metal, where a long running time is often more indicative of minutes of blasting and chording along than a surplus of ideas. But Alda keep things moving, without sacrificing their black atmosphere (which they nail quite well). That’s maybe the best thing about this album: it’s competent at both its black and folk/Americana components. This is another problem many hybrid bands of this type face-they water down two (or more) genres and weld them together, unable to pull off either part adequately, but the members of Alda clearly know what they’re doing both on the soft and hard sides of their sound. Look no further than “Tearing Of The Weave”, which sounds positively rustic and evil in turn.

I compare this record, stylistically, to Abigail Williams’ solid release from earlier this year. It has the distant production, atmosphere and even cellos of their brothers from Arizona. The difference is that the sound on Williams’ Becoming feels like it’s been reached after some trial and error (which it was). Alda, however, sound like it’s a fully realized as a natural part of them. Their sound might be the way forward for American black metal-it manages to capture a unique cultural sound that may be the American contribution to the black metal legacy. In any case, Tahoma is a solid work that manages to pull the rare trick of doing two things well, not just one thing or two things badly. If you’re looking for a way forward for the American sound, this guys might be leading the way.[signoff predefined=”Signoff 1″][/signoff]