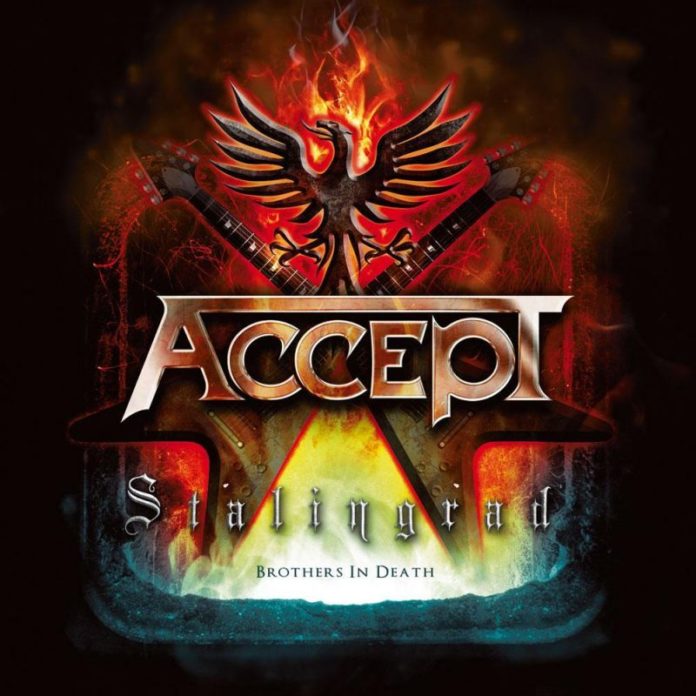 There’s something going on in Germany.  Whatever it is, they’re not letting the rest of us onto the secret.  The Teutonic terrors Accept are back and they might as well be riding a panzer tank into town.  After having received a very warm (and due) welcome back with their last album Blood of the Nations, Accept decided to keep going on full steam ahead and released Stalingrad, a jarring 50 minute tribute to everyone’s favourite genre: metal.

What’s ironic is that usually at this point the article is chocked full of hyphenated genres as one tries feebly to describe the mash up of sounds you’re about to hear, except in this case.  Stalingrad is a textbook definition of metal.  Not, nu-metal, black metal, death or groove, just plain metal.  Which ironically, seems to have become a niche genre in of itself.  And in that sense, Stalingrad’s return-to-form approach and no-frills attitude may be what makes it so powerful; kind of like a hot knife through butter or lard (depending on your diet, take your pick).  The album’s ability to hold itself up without having to rely on cheap gimmicks or never-heard-before-genre appeal is without a doubt what makes it work and work so well.  It reminds you that a genre being around for years is not what makes it stale, but the lack of creativity by the people holding the instruments.  And while Stalingrad doesn’t re-invent the wheel, it definitely taps into the same vein as Blood of the Nations and will feel familiar to you if you happened to give it a spin.

The “new Accept” formula is one that undeniably works; it remains inspired by the heydays of 80s Accept but not anchored by it and that’s why it works so well.  They’ve given themselves the liberty of being able to progress ahead but not so much as to alienate fans.  They already tried that in ’89 when they joined forces with David Reece and became a Poison cover band.  Again, this is a no-frills metal record; one that seems to set the world straight after oh-so-much bad screamo music.  Stalingrad is made more powerful when you consider the fact that the band has been together since ‘76.  At this point, you’d expect the albums to sound stale, even with their 14-year hiatus in between 1996 to 2010, but it couldn’t be further from the truth; Stalingrad manages not only to be a great album, it manages to be an amazingly great album and will without a doubt get Accept nominated for a Grammy.

With tracks like “Hung, Drawn, and Quartered” and “Stalingrad” kicking off the album and “Shadow Soldiers” and “Revolution” rounding out the middle, there’s no room for fillers by the time you get to the Mötley Crüe inspired intro of “The Quick and the Dead” and the beast that is “The Galley”.  Wolf Hoffman’s tone is still the cleanest in metal and Peter Baltes is still chugging along by his side.  The new drummer Stefan Schwarzmann performs amazingly and has an uncanny ability of being able to throw in the double bass just when the song needs it.  And not enough can be said about Mark Tornillo; he screams the highs and growls the lows in ways that not even Udo can do at his age.  With this album, Accept is clearly intent on making another solid impression in the world of metal and successfully shows that Blood of the Nations was not a fluke by any stretch.

With yet another solid release, Accept can proudly add Stalingrad to their discography.  And though it’s common to hear ‘Their old stuff was good, but their new stuff not so much’ nobody can say that about Accept.  If they do, they’re filthy rotten liars and only deserve to catch their choice of medieval plague and expire quickly.  I digress.  If music is the blood that flows through your veins, then Stalingrad is more than enough to keep your metal heart pumping.

Pack your bags and leave town if you don’t get the reference.