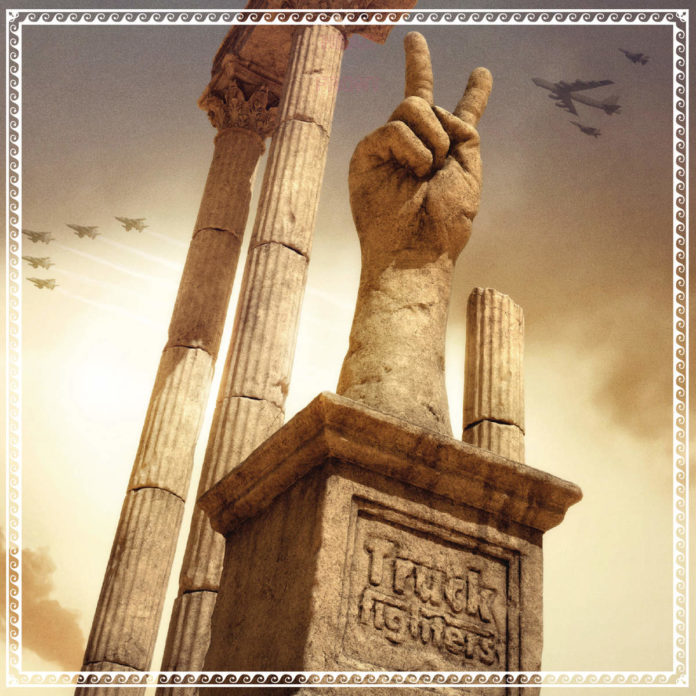 Truckfighters are one of those bands I’ve always been subconsciously aware of. Although there always seems to be this little voice in my ear telling me to listen to them, I usually disregard that voice. With V presenting itself to me in all of its intrigue and wonder, I could no longer ignore the voices and finally dove into the mystery of Truckfighters.

It doesn’t happen often, but sometimes you just start up a record for the first time and, in just a couple of seconds, you know you’re going to dig it. The album coughs to life with a hypnotic drone that drops the listener into a starlit desert complete with solitary palm trees and a comically oversized moon. After wandering the wastes for an unorthodox stretch of time, a chugging riff with more fuzz than the average peach tears up the scenery and reveals what Truckfighters are all about. V implements sway-inducing hypnosis and psychedelic fuzz, both tempered with a prog rock sense towards speed and direction (think Tool). A conscious approach to production encompasses all the elements of the album as pieces fade in and out without turning into a jumbled mess. While this style lives throughout the performance, it doesn’t seem to get old; instead, it turns the album into a mixing pot of groove laden riffs, sporadic percussion, and soft, ritualistic chants.

Although V shows that Truckfighters know their strengths, the consistent style and methods of the performance are a cause for some trouble. There aren’t many distinct moments in the album as very similar approaches to the music come out to play on each track. The lack of distinction results in many songs blending into one another, something that only highlights the non-existent development. Having said that, even though in V the band refuses to venture off in bold new directions, they have mastered their craft, and for that reason their desire to stay in one place is forgivable.

I resisted listening to Truckfighters for the longest time, and I have come to regret that decision. The album creates a convincing atmosphere in the first moments of playtime and draws the listener into its world of fuzz. It is captivating and scarily easy to get lost in. The performance does lose some texture and progression from its constant use of the same techniques over and over, but I don’t think it’s possible to get tired of listening to it.

Now, if you’ll excuse me, I have to go listen to the rest of their discography and, if you haven’t done so already, you should join me.

IN A NUTSHELL
The album may only do one thing, but it does it really, really well.
POSITIVES
Sweeping sections of melody and groovy fuzz.
Strong imagery.
NEGATIVES
Very little development.
4.5
Support the band (and US!) by purchasing their albums!
Amazon USAmazon UK

Album before this one was pretty damn good as well.