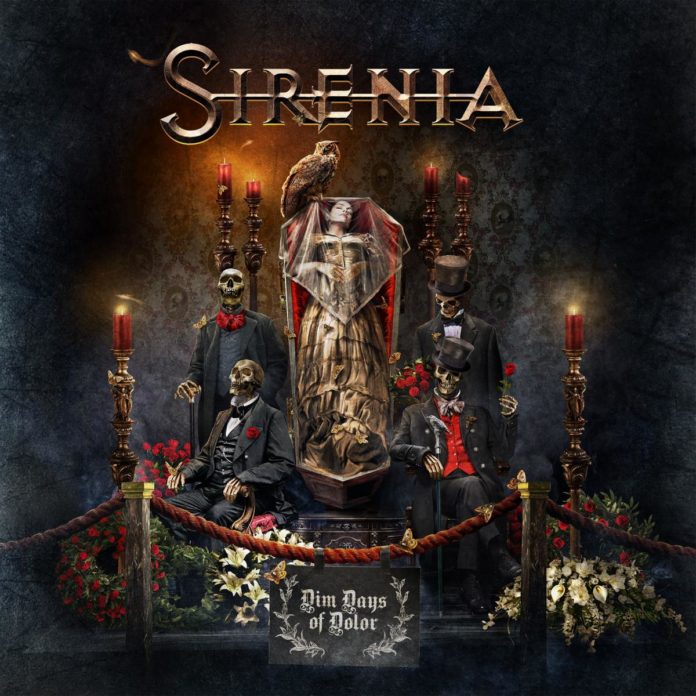 When guitarist Morten Veland left celebrated gothic metal outfit Tristania in 2001, he quickly formed Sirenia. Their music went down a similar sonic path as that of Tristnia, with rich symphonic elements, angelic female vocals with accompanying growls, and a choir. Dim Days of Dolor, the latest release from Sirenia, sees the addition of new female lead vocalist, Emmanuelle Zoldan, a classically trained Mezzo-soprano, and who has been part of Sirenia’s choir for the better part of the last 13 years.

To say that a gothic metal album sounds melancholy is like pointing out that the sky is blue, but Dim Days of Dolor takes Sirenia into a more sorrowful sound than on their previous efforts. The guitar work is as heavy as ever, and on tracks like “The 12th Hour” and “Fifth Column,” the harsh vocals add an extra layer of brutality. The closing track, “Aeon’s Embrace,” however, is a beautiful and gloomy piano/vocal-driven piece that acts as a condensed version of the overall tone of the record. Even when the guitars are pummeling the listener, the synthesizers, choir, and Emmanuelle’s soaring vocals cast the mood in a deep shade of grey. “Cloud Nine,” is a great example of this, with the angelic vocals and choir float dreamlike above the bludgeoning riffs, reminding me of Nightwish, who have a similarly moody approach.

The synthesizers on “Cloud Nine,” as well as in the title track, highlight another aspect of this record that really stands out: Sirenia seem to be embracing 80s gothic rock and electronica. The bouncy keys on “Dim Days of Dolor” sound like they belong on the soundtrack for the 80s vampire flick The Lost Boys, while the synths on “Cloud Nine” venture extremely close into dubstep territory. This might make a few extreme metal fans cringe, but Sirenia manage to incorporate these experiments into their sound pretty seamlessly. Before you get worried, no, there are no saxophones (and therefor, no visions of greasy loin-cloth wearing saxophone players) and no “sick bass drops,” since Dim Days of Dolor is still a metal album, through-and-through. If anything, the electronics and synths help add another dark layer to the mix, and enhance the overall gothic vibe.

The mixing and mastering is excellent, with enough crunchy guitar in the mix to remind the listener that, though the music is often beautiful and melancholy, Sirenia are still deeply rooted in the metal scene. Emmanuelle’s vocals are pretty high in the mix, but not overpowering, and are a real drawing point for this record. Though the choir is still used extensively, it manages not to be a distraction, as every instrument and each member of the band are given moments to shine throughout the course of each song. There are layers upon layers of overdubs for the vocals and instruments, which might be a lot to take in, particularly if you’re used to the raw, stripped down approach of other extreme metal genres, and yet Dim Days of Dolor still manages to avoid sounding too “busy,” and you can still hear each separate instrument and vocal piece without much trouble. All in all, Sirenia have produced another gothic masterpiece, and have really hit the jackpot with their new vocalist, who really deserves to be mentioned together with the greats of the genre like Floor Jansen and Simone Simons.