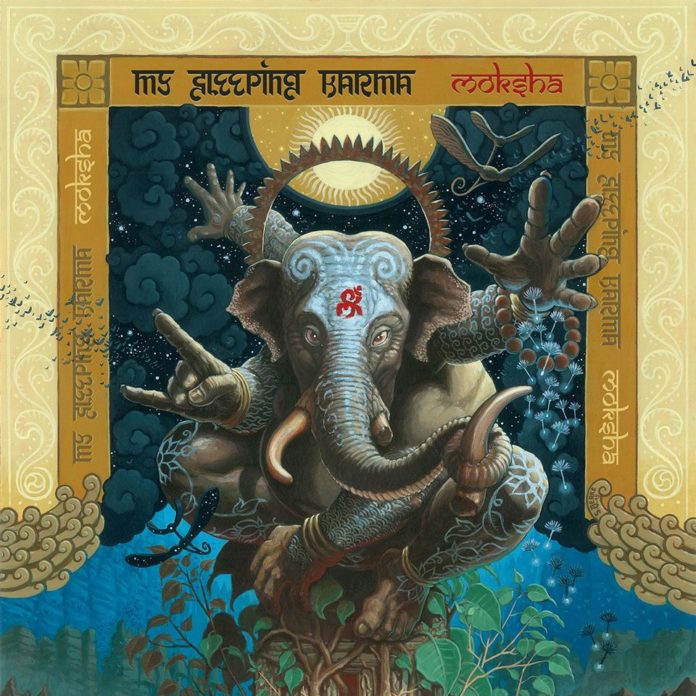 It’s pretty hard to nail instrumental music. In their attempt to maintain the same structures that they would use in a “normal” song, many bands end up releasing what can only be defined as backing tracks. Music that seems to be screaming for lyrics, and which sounds just incomplete without them. Guitar virtuosos notwithstanding, few bands make instrumental work sound as complete as My Sleeping Karma.

Accurately described by some as “psychedelic rock”, the music of My Sleeping Karma is the stuff of dreams (or acid trips). It’s a style that they’ve been perfecting for almost 10 years now, since their self-titled debut in 2006, and which only seems to get better as time passes, mixing psychedelic rock with Eastern sounds (the references to Eastern mysticism aren’t a coincidence) and the skills of luminaries like Buckethead.

Due to the structure of the music itself, Moksha cannot be properly analyzed in a song-by-song basis. Actually, for that matter, My Sleeping Karma aren’t a band that can be analyzed in those terms either. Although it’s a common trope to say that a certain album needs to be “taken as a whole”, in the case My Sleeping Karma this is certainly true. Of course, there are great tracks that work well on their own, the question is whether that’s how you should listen to them. If we look at “Moksha“, the title track, running over 9 minutes, and “Prithvi”, for example, they are two amazing journeys through desert and psychedelic rock, and which you can easily play on your car while you’re taking a drive (or, like me, while riding your bike); the issue is that even though, in the strict sense of the word, they are “songs”, their power lies elsewhere.

The strength of Moksha comes from the ability of the songs, and the album as a whole, to awaken feelings in you that shouldn’t actually be there. How can I explain to you that I think “Vayu” is deeply melancholic song, yet full of fury? How can I make a rational case that, within its power, “Agni” sounds happy? Obviously, I can’t, and that’s what’s so fucking great about it. My Sleeping Karma create music that means something to them, filled with an Eastern mysticism that you may or may not believe in (or even be aware of), and which has all the potential to mean anything to the people who listen to it. While this may be true of almost any piece of art, when you are able to do it in the realm of rock, without resorting to any lyrics whatsoever, keeping the music catchy and melodic, and doing everything in a creative and new way, then you truly are something else.

Moksha also shines because of its great production, and which also lends a lot to the music. The clarity of the instruments in the mix, as well as the way in which they are used (particularly the soundboard) to alter the overall feel of the songs, is superb. Although I’m still a fan of their 2006 debut, in terms of production it can’t really hold a candle to what they are doing now.

As much as I loved this album, I can also see why some people might not feel the same way. This is far from a straightforward release (the “main” songs have 5 interludes between them), and there doesn’t seem to be a lot of variation from what they were doing back in 2006, let alone in 2012; you could swap songs from Moksha and put them in 2012’s Soma, or vice versa, and they wouldn’t seem out of place. Some might see this as a sign of creative stagnation on the part of the band (and I know I’ve expressed similar feelings in regards to others) but I don’t see it that way. Although the sound of My Sleeping Karma has remained more or less constant throughout the years, I don’t feel that this album represents a repetition, but rather a continuation. It may sound like a distinction without a difference, and for all I know perhaps it is, but all I know is that I can lay down on my bed, play this album, close my eyes, and trip balls.

And, for as long as I’ve been listening to these guys, it always works.

IN A NUTSHELL
A great album that continues the amazing trend set by a very creative band,
POSITIVES
Evocative music that can blow you away.
NEGATIVES
There isn't a lot of variation from their previous work.
5