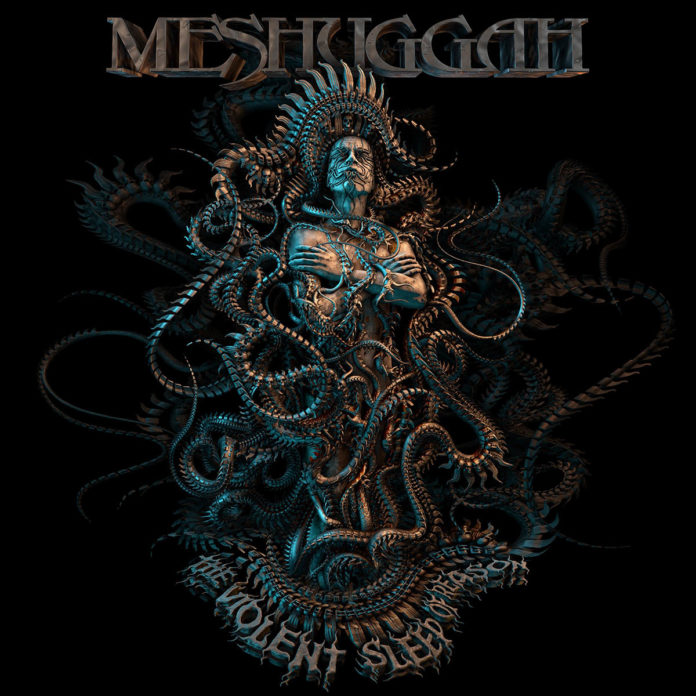 The first time I listened to Meshuggah, I was much too young. I was confounded by the experience, didn’t understand what all the fuss was about, and most likely went back to whatever *gag* metalcore band I liked that week. The other day, a random guy on the bus asked me if I like Meshuggah and went on a tangent about how awesome they are; with The Violent Sleep of Reason boiling over the horizon, I figured it was time to give them another try.

When it comes to crushing the listener, Meshuggah don’t waste a second. The guitar bottoms out with heavy distortion and snakes forward in a stuttering wave. The percussion is staggering and avoids being pinned to rhythm at every turn. The vocals, as fans would expect, rip out in guttural growls with a focus on enunciation and the lyrics paint a scene of a bustling city in the process of melting. The music reflects this theme as it deconstructs itself and defies orthodox methods of order and harmony. The tempo switches between frenetic riffing that is nearly impossible to follow, and a fat lumbering pace that builds a suspenseful sensation that something massive is about to collapse. These elements together create a mire of sound that at times is the sonic equivalent of jumping into a pit of jackhammers.

The Violent Sleep of Reason is the polar opposite of easy listening, and this method presents some challenges that trip up the performance. There are moments when it is difficult to distinguish between tracks as they all employ experimental techniques with their timing. Also, the tracks do not build off one another, but instead exist within their own microcosms of chaos and aggression. The disjointed feeling may be an intentional decision to mirror the nature of the music, but the loose connections on their own do not provide any intrinsic merit.

The Violent Sleep of Reason is a task to listen to, and I mean that in the best way possible. Without an attentive ear, it sounds as though every member of Meshuggah is simultaneously playing a different song and the music quickly becomes an impenetrable wall of noise. Taking the time to focus on the music, however, reveals the subtle and more apparent ways in which the rhythm is beautifully warped and twisted. The album suffers from a feeling of segmentation that hurts its ability to function as a whole, but this is offset by each song being capable of standing on its own. While fans of Meshuggah know what they’re in for, let me give a warning to any curious listener: be prepared to sit down and give this your undivided attention.

IN A NUTSHELL
Might take some time to enjoy it, but it's worth the effort.
POSITIVES
A complex and challenging approach to music
NEGATIVES
Nearly impossible to listen to while distracted
4.2
Support the band (and US!) by purchasing their albums!
Amazon USAmazon UK