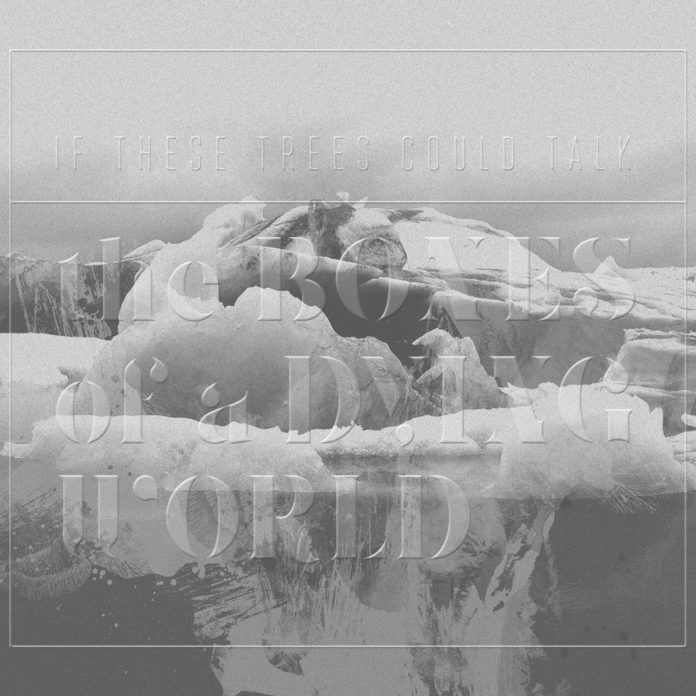 It’s bands with names like If These Trees Could Talk that make me wonder what people shout out at their concerts. Trees? I’m guessing trees. Long names aside, the post-rockers present their third release, The Bones of a Dying World, an album where the cover art actually reflects what is contained within. Because, just like with an iceberg, there is much more below the surface.

One of the strongest aspects of the album is the smooth flow that lifts the listener and carries him through the performance. Even though The Bones of a Dying World is a fairly long album, it can drift past and evaporate as if it was never there. Songs link together fluidly, creating an all-encompassing and harmonious performance. The seamless nature of the album gives it a soundtrack vibe and lends itself well as a contemplative backdrop for hard-thinking. An attentive ear will find layers upon layers of depth and complexity churning deep within the harmony.

The album is made up mostly of crystal-clear, practically icy guitar passages, which is no surprise considering that three out of the five members play this instrument. The guitars bear a remarkable similarity to the work of Steve Rothery, both in the constant drone and buildups that transition to massive riffs. Despite being so guitar focused, however, the sound manages to stay varied, switching between soft, nearly tender moments, segments of mammoth power, and everything in between. The changes keep the audience on their toes, with the dynamic shifts in tone happening without a hitch, making for an even more mesmerizing performance.

Between all the dedicated string work, tasty tidbits of popping percussion and tromping bass sneak in and excite. The drums are applied in a unique way as they are not used persistently in order to maintain a beat or rhythm, but instead fire off at precise moments like sonic spikes. While bass is frequently buried beneath the mounting wall of guitar, it still manages to launch a handful of low and dirty riffs. The album may be heavy handed with its guitar work, but the other elements bring endearing character to the sound.

The effort and passion forged into The Bones of a Dying World is obvious. The careful construction of every twist, turn, and transition creates a performance that is effortless to listen to in its sizeable entirety. The consistent progression and variation captivates interest and keeps the sound exciting and fresh all the way. For fans of instrumental music and just music in general, The Bones of a Dying World is worth spending at least an afternoon with.

IN A NUTSHELL
Do you like post-rock and/or complex instrumentals? Give it a listen.
POSITIVES
Smooth and fluid throughout.
Dynamic Variation.
NEGATIVES
The guitar is sometimes overpowering
4.5