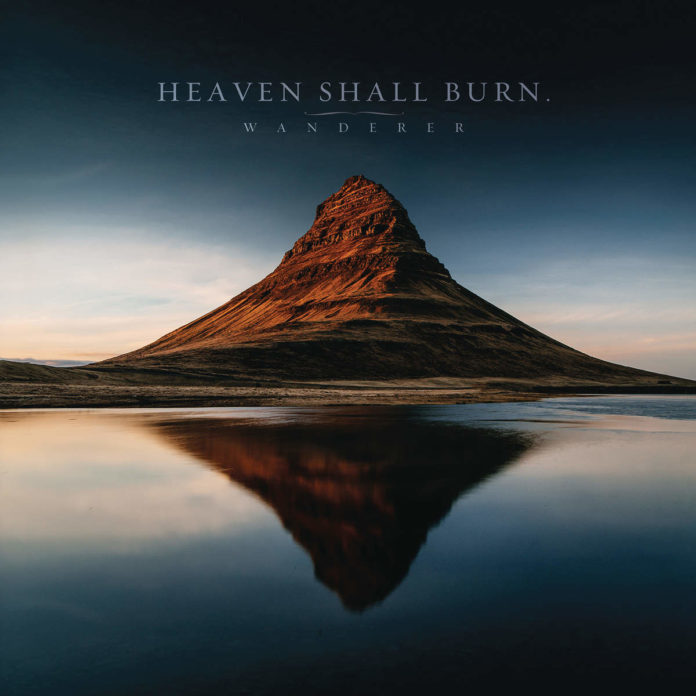 Since the beginning of metalcore, back in the late 1980’s, there have been debates on which bands get put in this category, particularly when it comes to bands that lean heavier on the metal side. Melodic death metal, for instance, has often been used interchangeably with metalcore when it comes to North American bands like The Black Dahlia Murder and The Absence, both of which take sonic cues from Swedish bands like At The Gates and Dark Tranquillity. The bands themselves aren’t overly concerned with labels though, leaving the categorization up to the fans and us sad bastards that call ourselves metal journalists. In the case of Germany’s Heaven Shall Burn, there’s little doubt that they’re a metalcore band, with their sound falling right smack in the middle of metal and hardcore. As far back as 1996, Heaven Shall Burn have blended the two genres seamlessly, with each song containing equal parts melodic death metal influences, and American hardcore brutality.

Wanderer, the band’s 8th full-length, contains everything you’ve come to expect from them, with a few surprises along the way. If you prefer your metalcore more on the melodic side of things, give “A River of Crimson” and “Passage of The Crane” a try. Both tracks have some truly serene moments, while still having enough heft in the riff department to be considered heavy metal, particularly the speed-picked sections of “Passage of The Crane.” If, however, you want something that’s sure to stir up a colossal mosh pit, this album has you covered too, with rippers like “They Shall Not Pass” and “Prey To God,” the latter of which features a killer guest performance from George “Corpsegrinder” Fisher of Cannibal Corpse. There are 4 guest appearances in total on the deluxe version of Wanderer, and every one of them are thoroughly enjoyable. Frank Blackfire (ex-Sodom) joins on a killer cover of Sodom’s “Agent Orange;” Nick Hipa (Wovenwar) lays down a blistering solo on “Save Me;” and Aðalbjörn Tryggvason (Solstafir) provides vocals on an absolutely breathtaking rendition of My Dying Bride’s “The Cry Of Mankind.”

The first song by Heaven Shall Burn I remember listening to was “Counterweight,” and I remember being blown away by the power in the vocals; there are countless sections on Wanderer that remind me of that exact moment. Frontman Marcus Bischoff remains one of my favorite metalcore vocalists, as his high-pitched screams are blackened and raw, while his guttural, mid-ranged growls are some of the most ferocious in the genre (just listen to “Bring The War Home”).  The guitars are excellent, with a good blend of brutality and beauty, the bass has plenty of presence in the mix, and the drums always have a knack for finding the perfect groove (again, I point to “Passage of The Crane” as an example). There are also keyboards that show up occasionally in the mix (most prominently on “The Cry Of Mankind”), but they are used as a way to thicken the layer of melody that has already been provided by the guitar work, and doesn’t really distract too much. Of course, all of this would all be meaningless without a great vocalist; thankfully, Bischoff adds that extra level of aggression to the mix and, in my opinion, really sets Heaven Shall Burn apart from the rest of the pack. I’m also glad to say that the band continue to avoid the usual “screaming verse – sung chorus” routine you hear in most metalcore records these days.

With an immaculate production, Wanderer distinguishes itself as a truly must-have melodic metalcore masterpiece. If you haven’t gotten on board with Heaven Shall Burn, this is a great time to start, as this is probably one of the band’s strongest efforts to date. Detractors likely won’t have their minds changed, but longtime fans will really be happy with this latest release.

IN A NUTSHELL
A solid release, perhaps one of the best from German metalcore masters Heaven Shall Burn
POSITIVES
A little bit of something for everybody
Crushing riffs, divine melodies, strong vocals, and a killer set of guest musicians.
NEGATIVES
Metal purists probably won't like the chuggy, hardcore inspired moments
Support the band (and US!) by purchasing their albums!
Amazon USAmazon UK