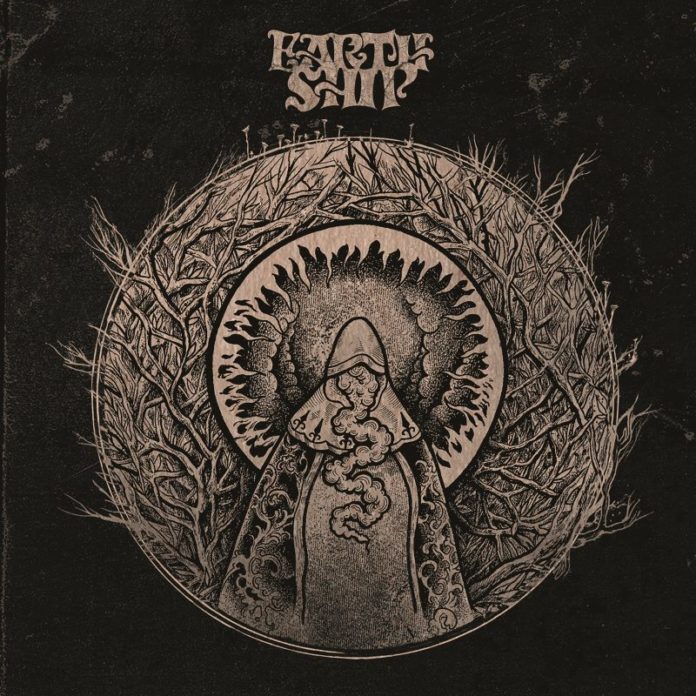 With this latest album, the German group of Earth Ship continue their exploratory combination of sludge, doom, and stoner metal, with crunch and grit apparently being their main concerns. And they succeed in delivering those qualities, as the grungy tuning/filtering of the guitar comes together with bass, heavy drums, and a range of throaty vocals to shout out the lyrics over the banging and clanging.

Happily, those dirt-loving sounds aren’t the only thing the band brings with their performances, though they do cover the bulk of the album. Slight twists on the formula come up now and then, such as the layered whine-howl of “Conjured” or the chuggy-paced riffing in “Castle of Sorrow”. For the most part, however, it’s pretty similar material from song to song, rumbling along on chunky chords, hard beats, and growling yells.

Part of the stylistic blur can be attributed to the mixing, which has everything running so hot and loud that there’s barely any room for it to breathe. And while that may sound like the way this sort of rock should be done, it works against the final product when that approach leads to the instruments bleeding into each other’s acoustic presence, reducing their ability to deliver sharp, clear tones and percussion. For all of the attention paid to the tone of the instruments on their way into the mix (guitar in particular), the output has a muddy quality to it.

Would the songs be all that much better with less amping? Could be. Quick glimpses of that possible incarnation flash by a few times, as with the ~10-second break-down at the end of “Monolith”, and in these passages, the restraint shows something with more punch to it by dint of simply enabling dynamic contrast as an option. It kind of reminded me of those stories of rockers who’ve been playing too loud for so long that they can’t really tell what level works, and just keep pumping up the volume arbitrarily. Is this just one of those occasions in which the band is getting screwed over as collateral damage in the volume wars, or did they listen to the final mix-down, nod their heads in approval, and feel satisfied with these maxed-out waveforms? (And for those of you who don’t usually see these, here’s another song best played loud, for comparison: Electric Wizard‘s “Wizard in Black”. Notice how even the loudest parts leave a little breathing room? That full fill look is something you’d see in actual noise rock.)

Aside from that production spotlight, and the repetitive nature of the songs, it’s not that bad of an album. Thanks to the onslaught of samey stuff, even slight changes come off as appreciable experimentation, as when they take a few measures in ‘normal’ vocals in “Red Leaves”. And they do have some sense of pacing and control under that sound blast, as evidenced by the careful (and genuinely impressive) building of the final track, “The Edge of Time”. It’s a shame the album ended up as it did but, even so, listening to it can still give some hope for Earth Ship‘s future efforts. Of course, it can also serve as an object lesson to make you more appreciative of the role restraint plays in the construction of other metal albums.

IN A NUTSHELL
If you must have your sludge, doom, and stoner metal in a combined form, this might do it for you. If you can stand to take them separately, though, there's so many better alternatives in each style that it's not worth your time to bother with this one.
POSITIVES
The musicians seem to have some good musical chemistry
The riffs are decent
A couple of songs come through without too many hitches
NEGATIVES
Kind of a mess on the production front
About 75% of the album feels redundant in terms of the music being played
Hardly any of the riffs have enough hook to them to stick around in memory after the album is over
3

Blood of the Sun – Burning on the Wings of Desire