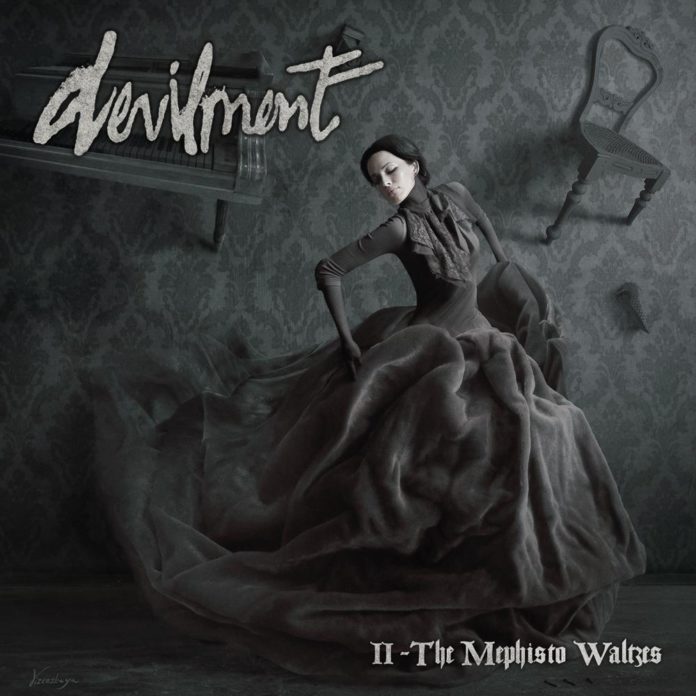 Packing blast-beats and slightly grimy guitar tones, the album operates in a fairly standard modern metal fashion, garnished with gothy touches along the lines of bells, twinkly keyboards, and the lyrical fixations. The group shows a good dynamic in joining their instruments together, particularly with the rhythms, although there’s not much for the ears to latch onto in terms of unusual or distinctive components, apart from a tendency to do brief drops into silence. The song titles provide a small but appreciable bit of charm, with names such as “Under the Thunder”, “Life is What You Keep from the Reaper”, “Full Dark, No Stars”, and “Hitchcock Blonde” providing a little playfulness.

While Filth‘s vocals are draped over most of the album, keyboardist Lauren Francis adds some occasional backing vocals, providing an element of gothiness that never seems to be developed as usefully as it could be. Her clean voice and Filth‘s growls both fit well against the tight pacing and compressed punch of the guitar, making it unfortunate that the lyrics don’t give them something more interesting to deliver.

On the bright side, it’s certainly a professional-sounding album, with clean separation throughout the mixing register, and a sense that the effects applied over the course of recording were carefully tuned and trimmed. At the same time, however, that sleekness leaves the music with practically no sense of spontaneity or unpredictable spark. Not that those are needed in high levels for every studio album, but it does come off as over-engineered, to the detriment of the work put in by the performers.

As the more vitalized bashing of “Shine On Sophie Moone” shows, Devilment have it in them to get lively and excited, which make the many sections where they seem to be just going through the motions appear much more disappointing. If they could find a way to loosen up and experiment a bit more, they might be able to create an album with memorable and catchy material. Sadly, they’re not quite there yet.

Not something to hunt down unless you want to hear a band teasing you with what it might be capable of playing, or if you're fixated on Dani Filth.
Good concerted efforts from the band members
Nice vocals from Lauren Francis
Asense that the band has something better waiting up their sleeve.
A fairly derivative set of songs
The production smothers the liveliness
Generic-sounding guitar
3

Beneath the Storm – Lucid Nightmare