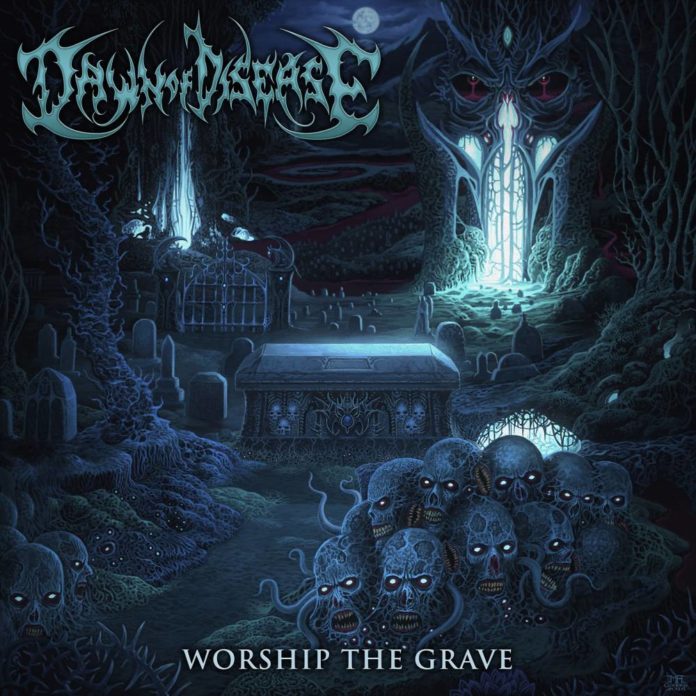 Striking the balance between heavy and melodic isn’t the easiest thing to pull off in extreme metal, particularly for death metal bands. Some bands go so far into the “melodic” territory that they forget that they’re supposedly playing, you know, DEATH METAL;  on the other end of the spectrum, some bands are seemingly so anti-melody that everything they play comes out as an atonal clusterfuck of blastbeats and riffs, all of them so fast that you can’t tell when the guitarist is changing chords. With Worship The Grave, the latest release by Germany’s Dawn Of Disease, we can see a way to avoid these problems, as the music is equal parts brutal and melodic, serving as a testament that, when it comes to metal, you absolutely can have your cake and eat it too.

The opening track, “Worship The Grave,” kicks things off to a pretty furious pace, with blasts, furious guitars, and growled vocals. The Swedish melo-death influences show up fairly quickly in the mix, with the addition of some melodic lead guitar bits coming into play about midway through the song. Dawn Of Disease are quick to make the sound their own, though, by switching (pretty seamlessly, I might add) back into a primal, vicious form of death metal. The band’s ability to flawlessly transition between ultra-heavy death metal and more melodic tones is awe-inspiring; “Through Nameless Ages” is another great example of this, with the track mixing rage and beauty (and one seriously tasty solo towards the end) into some riffs that will have just about any metalhead pumping his or her fist. The vocals never really stray too far from the low-end death growls common in the genre, but they work so well with the full range of sounds the rest of the music presents that there’s really no reason to experiment anyway.

“The Sky Is Empty” is the most “Gothenburg” sounding track of the bunch, sounding like something off of a mid-era In Flames record. It’s a little more mid-paced, but still has a heavy tone, mixed with some catchy lead-guitar work, once again perfectly blending the band’s influences into their own particular formula. Sure, some of the melodies can get a tad formulaic, a little too similar to the Swedish bands, but Dawn Of Disease are skillful enough songwriters that they manage to make melodies that sound familiar still appear brand-spanking new. “Cult Of The Fading Light,” for instance, sounds like at a pretty standard melo-death tune, until you hear how many changes of pace and timing the song actually goes through. On paper, it sounds like a pretty schizophrenic mix, jumping from time signature to time signature, switching between melodic and brutal, but the band manages to transition so smoothly, you almost don’t notice it’s happening until you’re into the next section of the song.

Dawn Of Disease managed to hold my attention from start to finish with Worship The Grave, thanks to the excellent musicianship and solid production. Everything in the mix is crystal clear, giving the melodic bits plenty of room to shine, while still allowing the heavier sections to pound the listener into submission. I didn’t hit the skip button once, even after several listens of the album in its entirety, which is kind of rare for me. It’s not that I didn’t have favorite tracks, it’s that this record should actually be enjoyed as a whole, and not get cherry-picked over. A-plus effort from Dawn Of Disease, Worship The Grave is definitely worth any self-respecting death metal fan’s time.

IN A NUTSHELL
Melodic and brutal at the same time, the latest from Germany's Dawn Of Disease is a damn fine death metal record.
POSITIVES
Excellent blending of heavy and melodic death metal
Solid production
Great musicianship
NEGATIVES
Some of the melodies are a tad formulaic
4.5