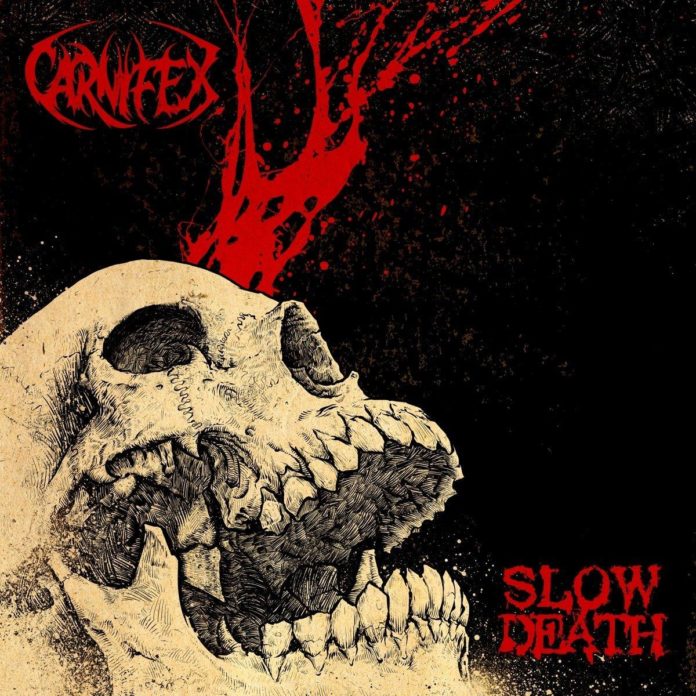 Unlike many of the bands that came up in the deathcore scene of the mid-2000’s, Carnifex have never tried to shun the deathcore label. Their sound has always embodied everything the genre has been about, for better or worse; vocals that switch back and forth between black metal-esque high pitched screams, deep death growls, and tons of breakdowns. While bands like Job For A Cowboy distanced themselves from the genre both in interviews as well as musical output (Job For A Cowboy are more of a technical death metal band these days, though the name is still ridiculous), Carnifex stayed the course, and have helped push the sub-genre in new sonic directions. The band’s 2010 release Hell Chose Me is a prime example of this; though the breakdowns were still abundant, the album saw the band experimenting with some menacing black metal influenced tones, and each subsequent release continued this trend of incorporating more traditional extreme metal sounds.

Slow Death, the latest release from Carnifex, once again features an unholy unity between black metal and brutal deathcore. What sets it apart from the rest of the deathcore crowd, however, is the way in which the band incorporated other tones, like black metal, melo-death, and straight up death metal. Carnifex, of course, aren’t the ones to mix in black metal but, in my humble opinion, they are certainly one of the best at it. Title track “Slow Death” has the type of chug-a-chug riff at the beginning that you’d expect on deathcore release, but the incorporation of symphonic keys over the riffs add an extra dimension to the music, giving it a melodic edge, and the solo towards the end up the melodic ante further, giving me an early-Abigail Williams vibe.

The band’s ability to switch gears between styles is pretty impressive, with the track “Drown Me In Blood” being an excellent example of this; there’s some fast, melodic black metal riffing (reminiscent of Dark Funeral) that quickly gives way to some djent-oriented riffing. The switch between sounds feels completely natural, which is the hallmark of good songwriting, as well as of a group of musicians that have developed some excellent chemistry with each other. Even though Carnifex have faced a number of lineup changes, they continue to put out some pretty quality material over the years. The inclusion of actual guitar solos and more melodic elements have given the band a boost over many of the other bands in this genre, who are still content in writing filler riffs between breakdowns.

The production is another high-point for Slow Death, giving the music lots of clarity, and incorporating the keyboards/synths without overpowering the heaviness of the riffs. The bass does have a tendency to disappear at times, particularly on speedier, black metal sections, which is a little disappointing; ironically, however, this problem actually gives the music an even more distinctly black metal sound.

The latter half of the record can get a little monotonous, in much the same way that other melo-death/metalcore records do; the breakdowns are still a big feature in each song, and the melodies can start to all sound the same after a while. Still, there seems to be a little more substance to Carnifex’s songwriting, a sincere sense of anger that is expressed pretty well in the way they attack the breakdowns; it doesn’t feel like they’re just writing moshpit anthems for a bunch of windmilling kids with shitty haircuts. I still find some of the breakdowns tedious, as well many of the extreme metal fans that aren’t really into breakdowns, but I also feel that the band’s incorporation of other genres kept things from becoming too one-dimensional. Slow Death is worth checking out if you don’t mind some hardcore influences in your extreme metal, and sees a band continuing to redefine what deathcore is, and what it can be.

IN A NUTSHELL
Carnifex continue to push deathcore into new territory, and have produced one of the best albums in their discography, and possibly the genre.
Reader Rating0 Votes
POSITIVES
Excellent transitions between styles
Melodic elements keep the songs interesting
Great production
NEGATIVES
Some of the breakdowns can get a bit monotonous
The latter half of the album drags a little bit
The bass guitar could use a boost in volume on some of the faster bits
4.5
Support the band (and US!) by purchasing their albums!
Amazon USAmazon UK