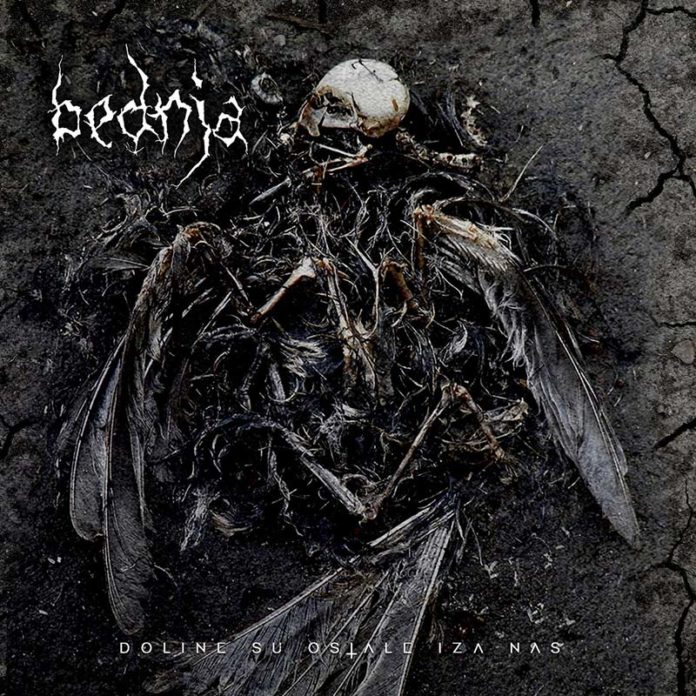 If there are two genres that shouldn’t mix, black metal and hardcore are probably it. They come from such different backgrounds, and have been shaped by such dissimilar forces, that it’s hard to imagine that anyone could successfully blend them. And yet, that’s precisely the task that Croatia’s Bednja undertake in their debut, Doline Su Ostale Iza Nas (“The Valleys Stayed Behind“) with very pleasant results.

The key to Bendja‘s success lies in the fact that they’ve only added elements of the harder side of hardcore into their music (think bands like Goon Squad) while still resorting most of the time to a more straightforward atmospheric black metal sound. Indeed, the band mostly stands very firmly in black metal territory, with only some hints of punk or hardcore influences. While there are certainly some breakdowns thrown in here and there (e.g. in “Doline Su Ostale Iza Nas”),  it is mostly in the lyrical department where we do find more of a hardcore style, as some of the growling on the lower registry does seem to be influenced by that genre.

Much more noticeable in the music are the atmospheric and psychedelic rock elements that Bednja has added to some of the tracks. In “Posljednji Krik” (“The Last Shriek”) and “Ledena Palaca” (“The Ice Palace”), for example, melodies reminiscent of My Sleeping Karma are used as intermezzos. This doesn’t only serve to separate the song into two distinct phases, but also helps to create a much larger impact once the band unleashes its full power again. Similarly, in their desire to create a grim mood, the band resorts to sounds of shrieking crows, winds, and of falling rain, added quite effectively to some of the softest parts of the record.

My biggest issue in Doline Su Ostale Iza Nas is that, while it’s a very enjoyable album, it didn’t feel very memorable. Part of the reason for this might be that the tracks didn’t seem very distinct from each other, sounding more like connected pieces of the same song. What this meant for me is that even though I could enjoy listening to the album as a whole, it was hard to actually pinpoint single songs that I was really into (although I do highly recommend “Povratak Kralja“),

In Doline Su Ostale Nas, Bednja have created a very interesting piece of music. They’ve dared to introduce truly foreign elements into an often too-restrictive genre, and that alone should make them worth checking out. While it is true that each song might not shine that much on its own, all of them together certainly show that there’s great potential in Bednja.

Bednja – Doline Su Ostale Iza Nas
THE BOTTOM LINE
A promising debut by a newcomer to the black metal field.
Reader Rating0 Votes
POSITIVES
An interesting addition of HXC elements into black metal
Good use of psychedelic and atmospheric elements
NEGATIVES
Most of the songs sound quite similar to each other
3.5