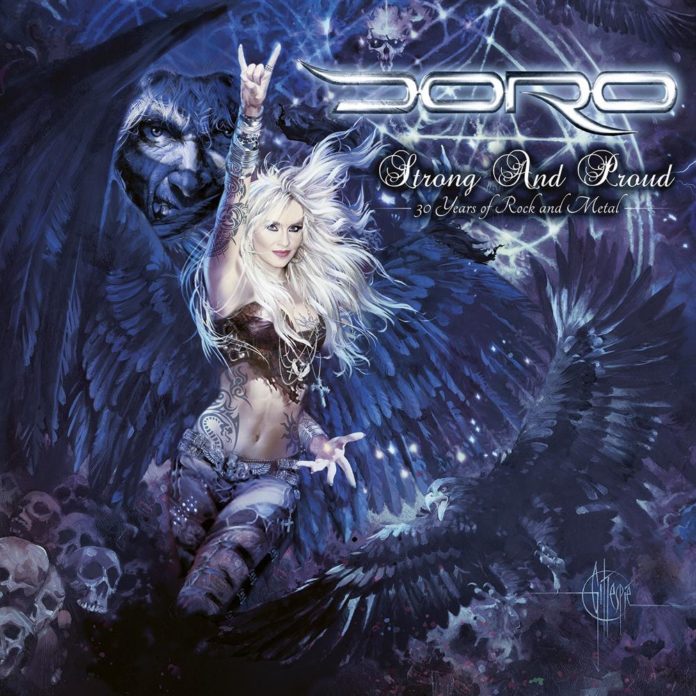 The importance of Doro for heavy metal in general, and female metal performers in particular, cannot be overstated. As the lead singer of Warlock in the 80s, she came into the scene at a time where women were seen as not really belonging to the metal and hard rock scene. What is more, even though at the time bands like The Runaways were also raising hell around the US and Europe, Doro seems to be the only one of her generation who has kept at it nonstop since then.

Because of her significance, it made sense to commemorate her 30 years career with a special tour as well as some unique anniversary shows with special guests. Strong and Proud – 30 Years of Rock and Metal is the result of this celebration, as it includes cuts from several of her shows. If you get the massive video editions of this album, be it on DVD or Blu-Ray, you’ll get to experience 3 of her concerts, one at Wacken and two in Dusseldorf, one being a “classic” show, accompanied by a small orchestra, and a “rock night,” where she just delivers her song straight to the point.

The version we’re reviewing, the LP and digital, is a bit of mishmash of all of these other editions, as it mixes some cuts from her classic night (like “On the Run” and “Fear of the Dark”) with those of Wacken and her “rock” night. This isn’t an ideal solution if you’re a big Doro fan, since it means that you’ll miss quite a few songs from each one of the shows, but it’s the best alternative for the format. Live albums are always a tough sell, and a 4 or 5 CD package, let alone a 10-LP one, would be prohibitively expensive for most.

Even if you are familiar with Doro and her discography, this release still offers some interesting bits. As part of the celebration, Doro is joined by the likes of Blaze Bayley (ex-Iron Maiden), Hansi Kürsch (Blind Guardian), UDO (ex-Accept), Uli Jon Roth (ex-Scorpions), not to mention an assortment of other artists that are featured in the video releases. It’s an interesting group and, except for Blaze Bayley’s rendition of “Fear of the Dark”, the guest performers do a pretty good job in the delivery. I make this caveat because even though I realy like Blaze Bayley’s voice, and I really enjoyed some of his solo material, his is simply not the right voice for “Fear of the Dark;” if Doro was adamant in having him appear, it would have made more sense if he had performed one of his Iron Maiden songs, like “Futureal” or “The Clansman” (which, by the way, would have fit quite well with the orchestral backing they were using).

Despite being the result of combining different performances, Strong and Proud goes from one song to the next almost seamlessly. I say “almost” because the album does feature some of the orchestral songs, and so you’re often left wondering why X song includes a whole strings section, while others don’t. While this isn’t something that will negatively impact your enjoyment of the album, it will ocassionally serve as a reminder of the fact that this is just an abstract of what apparently were some pretty good concerts.

As far as live albums go, Strong and Proud is a pretty good release. If you’re not familiar with Doro, the digital version alone serves as a decent summary of her incredible career. Of course, as most live releases, the replay value is fairly limited, but that is far from unusual. What matters here is that Doro‘s reputation for energetic performances and for her appreciation for her fans are both being clearly conveyed through the music and the show.

IN A NUTSHELL
Despite some small shortcomings, Strong and Proud serves as a good reminder of why Doro is the Metal Queen.
Reader Rating0 Votes
POSITIVES
A good selection of songs summarizing a terrific career
NEGATIVES
Unnecessary appearance by Blaze Bayley
4