As the western world comes to terms with some of its foundational horrors, should we give up on those stories?

[Correction: An earlier version of this article incorrectly suggested that Sabaton had only written songs about gallant actions. Readers quickly set me straight. ]

NKVD are a French band that plays industrial black metal or, as they call it, “totalitarian industrial” black metal. Their 2011 debut, Власть (pronounced “Vlast”, Russian for “Power”), is a who’s-who of 20th Century totalitarianism and authoritarianism. From Nazi Germany, to Ceausescu’s Romania, Milosevic’s Serbia, and the USSR, the band shows the many faces of state brutality and authority.

While making music about historical events isn’t new, what sets NKVD apart is that they don’t tell stories of heroes and gallant warriors but, instead, choose to give a voice to the dark parts of our history. Out of context, many of their lyrics sound like propaganda pieces written by fanatical followers of whatever ideology or cause any particular song is about. If you don’t know any better, “Socijalistička Federativna Republika Jugoslavija”, is a pro-Serbian war song; just like “Incipit USSR” would seem like a fanatical Stalinist anthem. It is only when they are put in the context of NKVD’s whole opus that it becomes clear that the band shows no real ideological preference. ALL totalitarianism is fair game, and no ideology is taboo. Driving the point home, the cover art is a combination of the hammer-and-sickle of Communism with the Nazi flag of the Kriegsmarine. Far left and far right totalitarianism together as one. 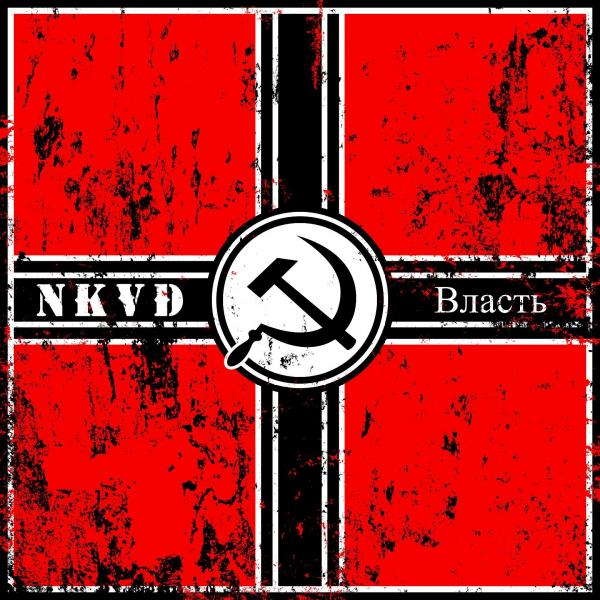 To give a voice to evil is risky, and NKVD do sometimes get accused of having some kind of ideological affinity with those portrayed in the songs. Putting aside that being simultaneously sympathetic to Soviet, Nazi, Chechen, and Yugoslavian tyrants would require multiple-personalities, it is interesting to think about why something like NKVD creates this type of reactions.

There is something uncomfortable about hearing real evil brag about its work. We know what these people did, and we know that, more often than not, they got away with it. We know that children were put into cattle trains and shipped to death camps; we know that dissidents were worked to death in Gulags; and we know about the massacres of civilians in Bosnia. Hearing a song, an entire song (let alone an album), seemingly voicing what they had to say, seems to many like a step too far. But I would argue that even though “It’s just history!” can sometimes be a cop-out, the fact remains that sometimes it is indeed “just history”, and it’s very much worth listening to.

Take Iron Maiden‘s “Run to the Hills”, one of their most famous songs and a staple of their live shows. The song approaches the American Indian wars by giving a voice to both the Native Americans, as well as the US troops charged with their displacement. In the song, the Native Americans lament what is being done to them, and wonder whether they will ever have the freedom and dignity that was taken from them, followed by the frontiersmen describing in no uncertain terms that they’re out for blood.

It is precisely the song’s unapologetic presentation of the mindset of many of the settlers who fought the Native Americans that makes it so effective. Instead of beating around the bush with metaphors and turns of phrase, merely suggesting the horror that took place, Iron Maiden pulled no punches in telling the story. By voicing someone who saw the natives as nothing more than “redskins”, subhumans who were in the way of the growing American nation, the band forced listeners to face the reality of history.

“Riding through dust clouds and barren wastes
Galloping hard on the plains
Chasing the redskins back to their holes
Fighting them at their own game
Murder for freedom the stab in the back
Women and children are cowards, attack!

The bloodlust of the frontiersmen portrayed in “Run to the Hills” is similar to the one we see in Slayer‘s “Angel of Death”. Voicing the disgust that Nazi doctor Josef Mengele felt for his subjects, as well as his remarkable sadism, Slayer created a powerful portrayal of the holocaust machinery. For this, the band was accused of harboring Nazi sympathies, an accusation that still amuses their very-much-not-white singer, Tom Araya. They faced a similarly negative reaction when they again used this first-person view in their song “Jihad”, telling a story about 9/11 from the perspective of one of the terrorists. Though nobody accused them of being Islamic fundamentalists, or even of being sympathetic to them, the wisdom, tact and decency of writing such a song were called into question.

“Jihad” is an interesting example, precisely because nobody thought Slayer sympathized with Mohammed Atta and the rest of the 9/11 murderers. It was giving them a voice that created the problem. It was not about whether or not the band sympathized with them, but instead about reminding us that evil people enjoyed what they did, and justified it to themselves. It’s one thing to fantasize about crushing our enemies, another one is to acknowledge that they do the same, and that they see us as disposable.

In the end, of course, this whole situation is about taste, and where each of us draws the line. I wouldn’t like to hear a song about rape being used as a weapon of war, so I understand that others might feel just as much revulsion over a song about the holocaust; we just have different sensitivities. So the argument is not that every edgy song is good, or that every time we voice evil we will necessarily gain something as a result. Instead, it is simply that the insight that we get when it is done well, is worth the risk of this occasional disgust.

The problem is that nowadays most small bands know that they are just one popular hashtag away from having their shows cancelled, their music pulled from Spotify, and their social media closed. This leads to the kind of self-censorship that narrows down what art is supposed to be, keeping us from any of the insight we could have gained from looking at evil from a different perspective. I fear that songs like “Angel of Death” and “Run to the Hills” could not be written today, since the bands would face a huge backlash for taking that lyrical approach, even if the artists themselves harbor no sympathies for the people they portray. Imagine just how much art we are missing out on, simply because someone is afraid of making it.

There is a benefit to looking into the abyss from time to time, and we should make sure that we don’t lose our ability to do so. And while it is undeniable that there are those who will merely use history as an excuse to propagate hate, the reward for keeping our minds open is bigger than the cost.

Click Here to Support Us!
Previous articleDown the Rabbit Hole with Diablo Swing Orchestra
Next articleMisogyny and Racism: The Gloryhammer & Alestorm Drama

Satan, Twerking, and The Fight for the Soul of America

The Fall of Jon Schaffer

An Open Letter from Orphaned Land (And Our Rebuttal)

Cardi B, Moral Panics, and Censorship