The COVID19 pandemic has created an enormous crisis for the entertainment industry. Concerts require people to be indoors, in close proximity to each other, and that doesn’t seem to be possible right now. But bands (and all the other industries surrounding concerts, for that matter) still need to make money.

Since, for many musicians, the majority of their income comes from live shows, several bands have started to stream concerts as a way to raise their revenue. This has been a controversial move for some fans, who seem to believe that bands should perform their online shows for free. The problem with that idea is that, in order to be able to continue creating their art, musicians need to be able to make a living. And since, for many of them, the band is their full-time job, expecting them to starve for art is simply unfair.

I met with Dani Filth, the founder and singer of Cradle of Filth, to discuss the addition of the band to this new livestreaming trend.

It’s a massive industry that is being affected, and everybody is trying to deal with it in their own way.

MB: Dani, first of all, how are you doing during this chaotic year?
Dani: Everybody is fine here where I live at least. We’ve had a very low rate of infection; I don’t even know anybody who has had COVID. Things have been quite relaxed here, though it has all been really weird, like it has for everybody else. I was supposed to be going to Italy this weekend, but I had to cancel it because the travel corridors keep opening and shutting, so it’s not worth taking the risk, since I have to be back next week to start with the mix of the new album. I couldn’t afford having to self quarantine for another two weeks!
Fortunately the lockdown happened after the drums of our new album were already recorded in the studio, since our drummer is from the Czech Republic. The studio is close to where I live, so I spent most of the lockdown just recording vocals and working on the tracks with the producer. It was a very relaxed studio session, with no worries about deadlines or having people say that we’re over budget… I mean, yes, we are probably over budget, but it’s mostly about the time constraints that we normally tend to worry about.

MB: It’s great to hear that, on a personal level, it hasn’t been a very bad period for you. And, professionally, what is the situation like for Cradle of Filth?

Dani: We can’t do anything. Everybody came and recorded their parts for the album, including our new keyboardist and backing vocalist. It’s all sounding amazing, and everybody seems to be in very high spirits. The whole situation is shit, yes, but there’s nothing that anybody can do about it. I believe that the Czech guys in our band are actually able to play with their other bands in the Czech Republic, since they are still doing concerts there (which is kind of life-affirming). This is the whole reason why are doing a livestream for the fans. Originally it was supposed to happen in July, but the venue was having some structural work done so it had to be pushed back, so we made it for Halloween, and coinciding with the 20th anniversary of our album Midian. 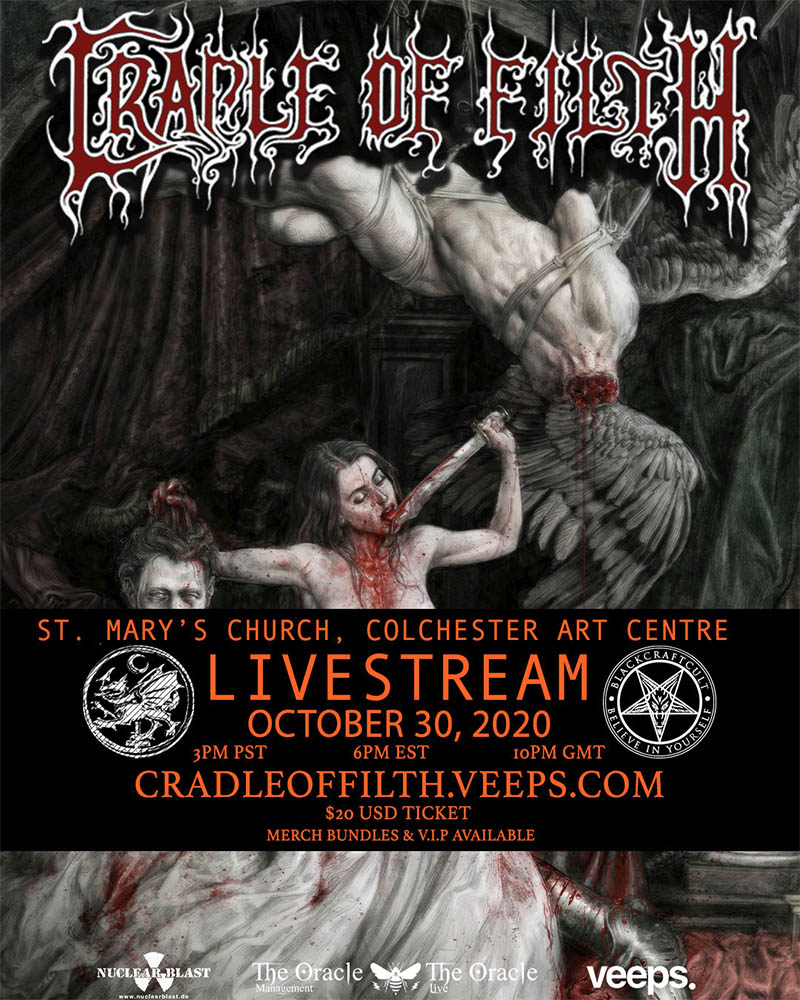 MB: Livestreaming concerts is really a great way to keep in touch with fans now that you can’t actually go on tours. What challenges do you envision when it comes to trying to replicate the live experience under the constraints of a livestream?
Dani: I don’t know, because we haven’t done one yet![laughs] It’s new for everybody, it’s unprecedented. We will have a good film crew, and we’ll be there at the venue a couple of days in advance to rehearse. And then we’ll have a day of pre-production, so we’ll get the camera angles, the effects, and the lighting right, but until we get into the venue we can’t really say anything more than that, because it’s a totally new thing.
A lot of planning has gone into it, so it’s gonna be a good event. The band is really looking forward to it, since it’s the only concert we’ll play this year… and it’s going to be a spectacle! It won’t just be 4 or 6 guys, isolated in different portions of the screen. It’s a full-style concert.

MB: Live shows represent a huge part of the revenue for musicians. Is this a big concern for the band at the moment?
Dani: Naturally, it’s a concern. It annoys me that there are people out there saying “You should be giving back to the fans, you should be giving a free concert.” But what are they doing? Are they donating all of their income? Of course they’re not, and bands also have to survive! Plus, it’s not just bands; it’s everybody that is involved in the music industry, millions upon millions of people. People who work on the toilets, the people who serve food, the security personnel, the bus drivers, etc. It’s a massive industry that is being affected, and everybody is trying to deal with it in their own way.
We did have a tour booked, and we have kept moving it forward. Right now we were supposed to be out on the road with a package of 4 big bands, but that has obviously not happened. I think it has already been moved four times! At the moment we are looking at September of next year to begin this tour. I mean, there are opportunities to tour earlier than that, but I don’t believe that anybody is going to be doing much in the way of touring next year either.

MB: Do you feel that there are big misconceptions in regards to how the finances of a bands actually work?
Dani: Bands are like anything else. People have wages. Bands play concerts and release records. They do it because they are artistic, true, but also because that’s their job, and they need money. People seem to have this idea that bands got millions squirreled away so that it’s fine if they don’t have to play again, since they can just retire and live on a beach somewhere. Well, that may be true of people like Iron Maiden and Metallica, but for the majority of bands it’s an ongoing thing.

MB: You mentioned that you were working on a new album. Is there anything you can share about it already?
Dani: Not a lot, because I’ve been asked not to talk about it. It’s just the best thing we’ve ever done, it’s great, and we’ve had a lot of time in the studio to adjust and perfect things. There have been some rewrites along the way… but it sounds amazing. And it’s gonna sound even better once we do the mix. We have some narrative parts that will be added to the mix, and which is the final ingredient. Other than that, there’s no much more to tell. It’ll probably be released no later than April of next year.
Once this livestreaming show is out of the way we will probably release the first single. For now we will be doing a video for the album in Latvia, where we recorded the video for “Hearbreak and Seance“, and at the moment we can’t travel there. Again, everything is a little up in the air, except for the livestream, which is a certainty.

MB: Early on in your career you were in close communications with some of the early members of the Norwegian Black Metal scene, and as a band you were closer to black metal, particularly in your debut The Principle of Evil Made Flesh. Over the years, however, you have moved away from that sound, into a more style. Can you tell me about these changes?

Dani: Early on we were just friends with people from the Norwegian scene, as we were friends with people from all over Europe. In my opinion, at the time we had more of a death metal orientation in our sound, but the way in which we eventually came to our Cradle of Filth sound was just the product of what we were into at the time, as well as evolution. We were very heavily into soundtracks and classical music, so we brought that cinematic element into what we did.
We loved all the Earache and Peaceville… doom and death metal? I mean, it didn’t have a title back then, it was just extreme music coming out. Obviously then there was the uproar with the Norwegian scene, but at the same time we were tape-trading with bands like Impaled Nazarene, Necromantia, Moonspell… hundreds of bands, not necessarily just Norwegian ones. And then we did tours with Dissection, Emperor‘s very first tour… but at the same time we were also playing with bands like Carcass and Bolt Thrower. It was very varied, and it was that variation that helped sculpt the dynamics of Cradle of Filth.

MB: You mentioned “extreme” music. Over the years, what passes off as shocking as certainly changed. Is that a challenge?
Dani: It doesn’t bother us at all. It doesn’t even cross our minds. It might bother someone who wants to be like that, who wants to be known as a shock-rock band, but it’s not like that for us. As I said, it’s evolutionary. Things come and things go. Netflix shows are much more graphic than the “video nasty” that got people arrested. Those were really nothing compared to what we see on the screen now. You see much worse than that in the opening credits of The Boys. It’s just a natural evolution. People got used to things. Stupidity aside, people realize the difference between on-screen carnage, and off-screen carnage, and it’s a relief. And it’s the same with music.

MB: In fact, term shock-rock has been used to describe the band…
Dani: We’ve been called all kinds of things over the years. It doesn’t bother us. It’s fine, and a lot of that stuff is just fun to do. I mean, we are serious about it; it’s our career, our livelihood, our lifestyle. People moan if you’re on TV shows; people moan if you’re not on more TV programs. You can’t win. We just get on with what we do, when we do it.

MB: And finally, any plans to go back to acting, like in Cradle of Fear?

Dani: I’ve done some bit parts for cartoon narratives. I also have a part in a movie called Baphomet. It’s not a massive movie by any means, and it’s only a small part, about 5 minutes, but it was for a friend of mine, who’s a director. It was supposed to be released this year but… you know.

The Cradle of Filth livestreaming concert will take place on October 30. More information, as well as tickets, merch, and VIP packages can be found HERE.

Persevering: An Interview with Hatebreed