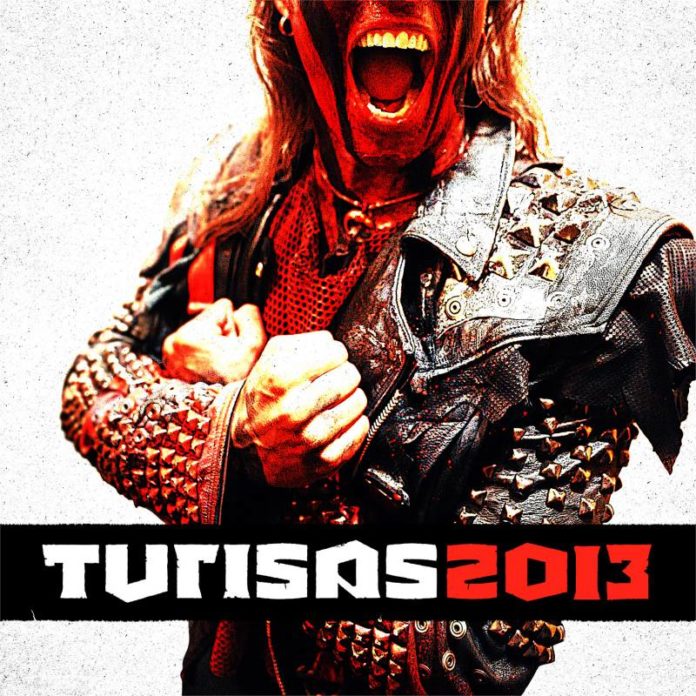 Among the hordes of self-proclaimed Viking metal acts that took the mainstream metal scene by storm in the last ten to fifteen years, one band held up their banner higher than the rest; it wasn’t their  image nor their lyrics that made them stand out, but rather their diverse approach to songwriting. And while others usually infused their melodic-death metal foundations with sampled flutes and fiddles while wielding plastic swords and axes, Turisas dared to explore grounds that no one else did – fusing all sorts of heavy, power and thrash metal influences with grandiose orchestral arrangements, sounds from the Balkans and even some pop elements. Now the pioneers of Battle metal (a term which the band themselves coined) are back with their fourth album, simply titled Turisas2013.

While the uninventive album title, which sounded more like a Twitter hashtag, and the even more uninspired cover intimidated me at first, the two singles, “For Your Own Good” and “Into the Fire,” quickly reassured me that the guys knew what they were doing. And even though these songs hinted that the album could be much different than anything the band had ever done, in reality Turisas2013 is a full-blooded heir of the style set by the previous release, Stand up and Fight.  At times you might even hear songs like “The Days Passed,”  “Ten More Miles” or “Piece by Piece,” picking up right where “Fear the Fear,” “Stand Up and Fight” or “Hunting Pirates” left off.

Still, there are some new grounds covered in the music, like the punk influenced “Into the Fire,” the humppa elements in “No Good Story Ever Starts With Drinking Tea,” which serves as a nice comic-relief, or the jazzy porn-soundtrack part in the middle of the bombastic “Run Bhang-Eater, Run!” a track that also features strong oriental influences. Although, as you can see, this album feels like it’s all over the place, at the same time it’s very coherent, with all the tracks retaining the Turisas trademark.

This time the orchestrations were significantly reduced, although they remain present, with the album being mainly guitar driven, as it becomes evident with tracks like “Greek Fire” or the shredding “Piece by Piece.” The production is again superb, bringing out the best of each instrument, both for the core band and the backing instruments like the trumpets, sax and even the backing vocals, which stand shoulder to shoulder with the lead ones. The album length is also perfect, long enough but still leaving you begging for more.

While the album might take a few takes to digest, it stands up to the expectations set by the previous records. Turisas seems to be ever evolving, while remaining true to their roots and their basic ideas. Turisas2013 is an inspired, musically challenging record that shows that this band is determined not to stop or make any sort of compromise, now or ever.