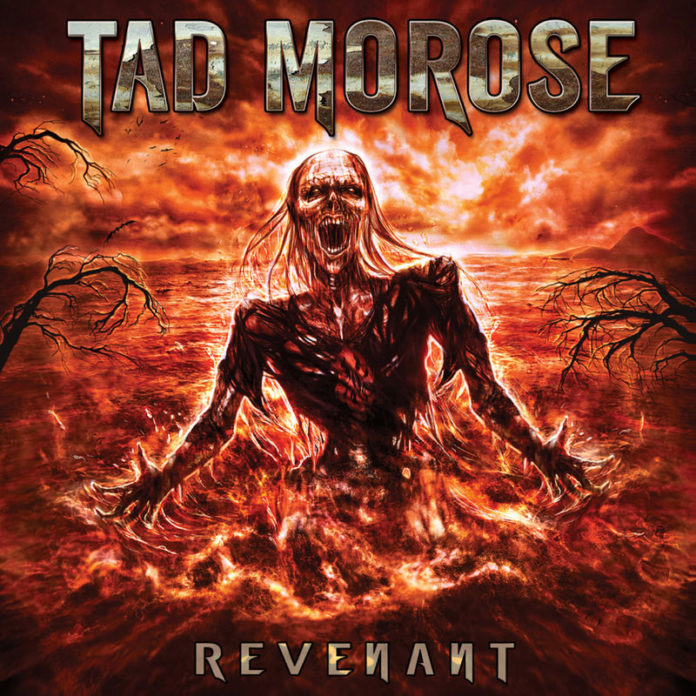 While most people would probably shrug at the mention of Tad Morose, I have a lot of great memories of the band. It was during my period of looking around the darkest corners in order to find a fresh, non-generic power metal band, which anyone into metal knows is a challenging quest. The answer came as a music video on a Czech satellite channel for a song called “Anubis.” Their mash-up of progressive, power and traditional metal influences took me aback… and then, all of a sudden, the band disappeared into the obscurity for what was to be ten long years.

I was pleasantly surprised when I heard that the band had announced a comeback in the form of a new album, aptly titled Revenant. The band had gone through some line-up changes in the meantime, with two members who played on Modus Vivendi on board: guitarist Christer “Krunt” Andersson and drummer Peter Morén. The rest of the lineup is comprised of bassist Tommi Karppanen, guitarist Kenneth Jonsson and vocalist Ronny Hemlin.

While Revenant represents a fresh start for Tad Morose, I can’t avoid comparing it to the previous opus. The opening track, “Beneath a Veil of Crying Souls” gave off a pretty good first impression, a fast-paced track driven by shredding guitars and Hemlin’s shrieking voice. Both the opener and the following “Timeless Dreaming” are a good start, picking up where Modus Vivendi left off. But it’s with “Millennium Lies” where things start to slow down, and drift further from the previous record. Revenant traded in the progressive elements and the mild proggy, Blind Guardian vibe for a more traditional metal approach. The tempo is unchanged for the most of the record, with pounding mid-tempo tunes occupying a larger portion of the album. To give you a more accurate description in form of a comparison: the song arrangements and the guitars remind me mostly of Iced Earth, plus add to that the fact that Ronny Hemlin’s voice and singing style sound awfully like Ripper Owens’ (to the point where I could have sworn it was Ripper singing had I not known otherwise).

I’d be lying if I were to say that I don’t like the album, I really enjoyed listening to it. However, I can’t help but feeling bothered with the obvious lack of diversity and turning to the well-established traditional metal clichés. While their previous albums sounded refined and fresh (especially during a time when all the power metal bands started sounding awfully like each other) Revenant has a certain déjà vu feel to it. Even so, it is one of the best power/heavy metal album you are going to hear this year. While not as epic or progressive as its predecessor, the new record possesses the same blood-pumping energy.

While the album is certainly enjoyable, it might take you some time to fully digest. Regardless, Revenant is a great comeback for a band that has been away for so long. Although times have changed and their style is not as popular as it used to be back then, the fans of early 2000’s metal, and the fans of the band, will definitely enjoy this release to the maximum.