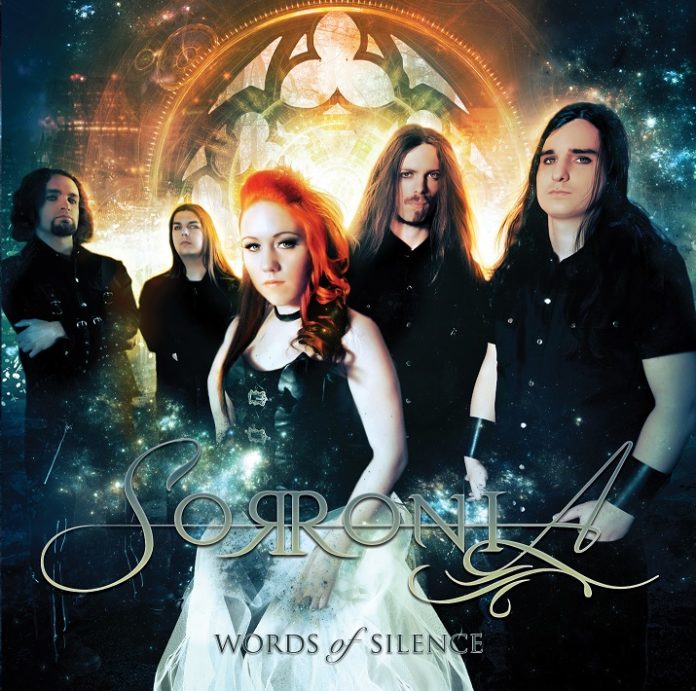 Sorronia (previously known as Thristana), a re-vamped symphonic metal band from Hungary, are ready to debut their first album, “Words of Silence”, later this month. While there is no doubt that metal has always been, traditionally speaking, music for men, Sorronia, much like Nightwish, Within Temptation, and other female-led metal bands before them, are ready to break into the genre. With rich, full melodies, lovely album artwork by Alexandra V Bach, and a well-composed, all around enjoyable album, Sorronia might just be ready to step forward and take their rightful place.

Anna Király features a a softer inflection than the listener might expect, and although she does not possess the same operatic qualities of many other female vocalists, her softness lends a tenderer ambience that works greatly in the band’s favor. The gentle, yet rich, quality of her singing provides a smooth and melodic cadence for the lyrics, which reference love, anguish, and the overall spectrum of human emotion. This in turn allows for subtle stylistic diversity among the songs; with Anna’s whimsical vocals, the well-crafted lyricism, and the band’s hypnotic and rockin’ melodies, the album can quite naturally shift from slow, impassioned songs such as “Serenade of Memories” and “My Eternal Land” to heavier, faster-tempo songs like “Lost in Falling” and “Leave it Behind”.

A distinguishing feature for the band is their ability to interweave the orchestral works with band’s harmonies and melodies, without excluding each other. Although many times symphonic metal allows for some orchestral backing to the music, the symphony is often set aside in favor of the primary guitar melodies. Sorronia says no thank you, and allows for a symbiotic relationship between the two, giving the symphonic elements plenty of moments to work in the favor of the melody. Almost every track on the album incorporates not only a beautiful and powerful guitar riff or rhythmic, pulsing drums, but also opulent and hearty symphonic moments. Perhaps as a girl who has played in numerous orchestras, I’m a little biased in my listening preferences, but it still speaks well to the artistic styling and composition of the album in that no one particular element is forced to take the backseat.

The release of their promotional music video for the song “Enemy of Yourself” garnered a decent amount of positive attention, showing that perhaps they do have a place amongst the other bands that currently comprise the genre. It’s easy to see why, asthis album has woven together numerous different stylistic elements, and nothing feels out of place as you go from track to track. But how well they will be received is still up in the air. Despite their obvious talent and potential, there still seems to be the feeling that we’ve heard a lot of this before. Anna possesses the whimsical qualities that a symphonic metal singer requires, and the band knows how to utilize their guitar riffs, their melodies and their lyricism. But who’s to say it’s that much different than what Nightwish gave us years before?

Sorronia might not be anything new or revolutionary for the genre of symphonic metal, but at the very least they do the it justice and are ready to join in.