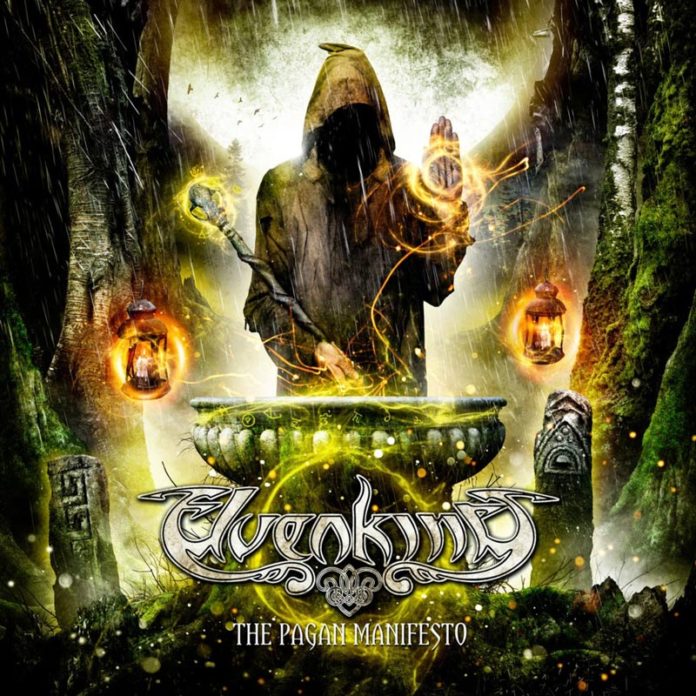 Elvenking have been around for almost 20 years, and have had a number of well-received albums and catchy tunes. While they’ve had their fair share of experimenting with various styles, 2012’s Era saw the band take a step back towards the sound that made them famous in the first place; this is a trend that Elvenking decided to follow with The Pagan Manifesto.

The album kicks off with “King of the Elves,” a 13-minute tribute to Heathenreel, packed with all of the trademark elements that made their debut popular among fans and critics alike. It boasts an intricate song structure, a magnificent chorus straight from the book of late 90’s power metal, and amazing guest performance by Amanda Somerville (Trillium, Avantasia). Although it is a bold choice for an opening track, playing the band’s strongest card in the first draw, the rest of the album has enough tricks up the sleeve to keep the listener interested. It follows up with catchy, up-beat tunes like “Elvenlegions” and “Pagan Revolution,” the wonderful acoustic piece “Towards the Shores” and the eerie “Witches Gather,” which rounds up the record.

The Pagan Manifesto sees prominently more traditional folk elements crowned by what might be Lethien’s (violins) finest performance to date. The traditional folk metal influence is evident throughout the album, particularly in “Moonbeam Stone Circle” and “The Druid Ritual of Oak”, both of which sound like Skyclad in their prime, coupled with anthemic chorus lines that have Helloween written all over them. Although in “The Solitaire” and “Black Roses for the Wicked One” Elvenking pay a visit to their more modern sound (both songs could have been on Red Silent Tides) for the most part they stick to a sound akin to that of The Winter Wake, albeit demonstrating that they have matured and grown closer together since then.

The musicianship is simply impeccable; apart from Lethien, Symohn is another highlight of the album, with his unique style of drumming unlike any traditional metal battery you’ve ever heard. Aydan and Rafahel work terrifically together, delivering some of the most memorable Elvenking solos in years. Damna delivers an extraordinary vocal performance, and although he has one of those “love-it-or-hate-it” voices, one cannot help but admire how he perfectly fits into the whole picture.

The biggest flaw of the record is that it plays most of its major strengths during its first half, leaving some less-memorable tracks like “Twilight of Magic,” “Grandier’s Funeral Pyre” and “Black Roses…” for the end. The fact that the album lasts an hour (which is a bit too long for my taste) only adds to the impression that the closing tracks were somewhat rushed, as they don’t live up to the vibe and quality set on the first half.

Overall, The Pagan Manifesto represents kind of a return to form, and will definitely be well-accepted by the nostalgiacs. Still, this isn’t just a re-hash of Heathenreel with new songs, but rather something completely new that incorporates the youthful energy and the traditional folk elements, while retaining the mature approach to metal that they’ve refined in the last couple of albums.