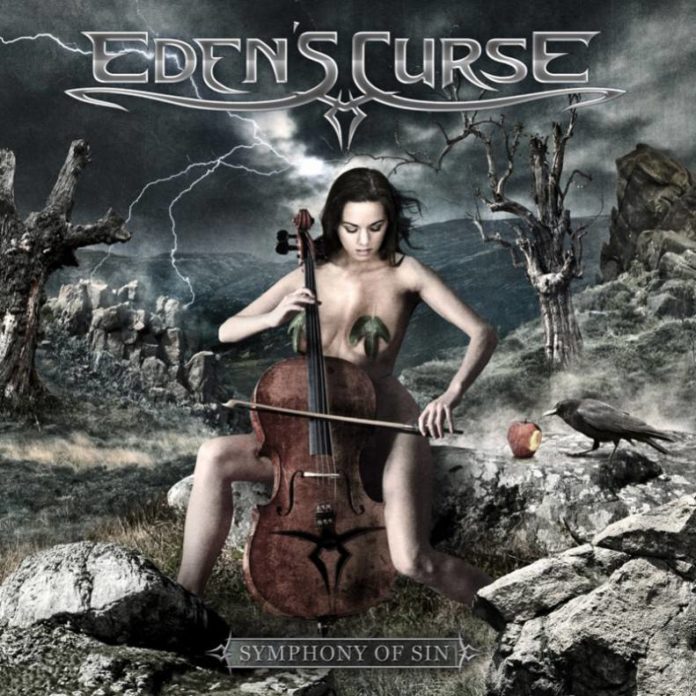 Eden’s Curse is one of those bands I’ve had in my long, “I have to check these guys out” queue, but I’ve never actually gotten farther than listening to a couple of songs on the band’s Myspace. The spark that had quite recently re-ignited my interest for this band was that Serbian-born singer Nikola Mijic had joined the band. Needless to say, hailing from Serbia myself, I was rather shocked (although not surprised). With keyboard wizard Steve Williams (Power Quest, ex-Dragonforce) completing the new roster, Eden’s Curse are ready to launch themselves straight to the A-league with their latest effort, Symphony of Sin.

Compared to their previous releases, namely Trinity, the band’s sixth effort seems much more consistent and inspired. Numerous influences are evident throughout the album, yet you’d never point your finger at a single song and accuse the band of lacking in originality or sounding too much like this or that band. Instead, think of the final product as a perfect blend including the raw power of classic heavy metal bands like Pretty Maids or Gotthard; pop-sensibility of Journey or Asia; sheer power of Helloween; grandiose feel of Avantasia; and the band’s personal stamp.

The best example of how well this blend works is the title-track, incorporating all of the above elements into a hit that has real potential for becoming a live classic. The album is quite dynamic, with bombastic tracks like “Evil & Divine” and “Unbreakable” standing side by side with mid-paced, hard-rock anthems like “Rock Bottom” and “Turn the Page,” along with crossovers between the two, such as “Great Unknown” or “Losing My Faith.”

The new line-up is rock-solid, giving off the feel that these guys have been playing together much, much longer. Steve Williams brings the vintage keyboard sound into the mix, giving the whole release a strong early-80’s feel. Thorsten Koehne’s guitar playing is outstanding, always keeping the listener focused on his intricate riff arrangements and melodies. The rhythm section, consisting of Paul Logue and Pete Newdeck, provides a solid, groovy hard-rock foundation, and the outstanding production keeps it from being too far in the background.

Despite being fully aware of Nikola‘s talent, I must say that he was the most pleasant revelation, as I was truly taken aback with his performance on Symphony of Sin. He sings with such skill, power and emotion that he could compete against the most popular singers in the scene today. He switches from a soft, jazzy voice to a rough, rock’n’rollish one with ease, hits the perfect high notes as well as dark, low ones. Just for refference, think of Mats Leven’s jagged, hard rock tone coupled with Russell Allen‘s powerful delivery.

The only complaint I have is in regards to the length of the album. The second half, although it has some amazing moments itself, fails to keep my attention compared to the first one. Listening to the two halves separately proved that it was not the quality of the songs, although releasing two or three of them as B-sides rather than album tracks would have definitely done the release a favor.

Symphony of Sin definitely turned out to be a genuine surprise. With the talented bunch of musicians, great songwriting skills and catchy hooks that resulted in this album, I have no doubt that Eden’s Curse are finally going to get the renown they deserve. This album is a must for all melodic rock and metal fans, and one that will be talked about for many years to come!

Goatwhore – Blood for the Master