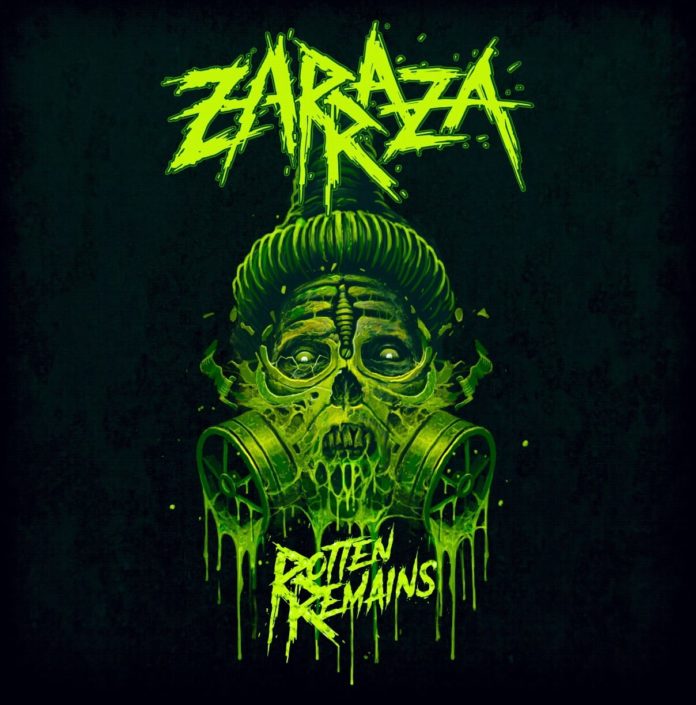 Were I a gambling man, I would bet you never heard of ZaRRaZa and, yes, them being from Kazakhstan might have something to do with that. Call it navel-gazing by us Westerners, but we often forget that people make good metal everywhere, so that there’s no reason to be surprised at a Central Asian band like ZaRRaZa playing old school brutal death metal. What’s interesting is that although their music would not have sounded out of place back in 1995, they do it in their own unique manner.

ZaRRaZa (Russian for “infection”) have a keen sense of groove, something that certainly wasn’t part of 90s death metal. Tunes like the delightfully titled “If I Was Satan” and “Failed Apocalypse” have a catchy bounce to them. Though some of the riffs sound repetitive (“wRRong Song” sounds like a rehash of opener “Zombie Kids”) this can be forgiven as ZaRRaZa explicitly acknowledge that these are re-recorded songs from their back catalog. This doesn’t mean that there’s nothing new here, as songs like “The Grudge” and “Bulldozer” incorporate traditional Kazakh instruments like the two-stringed, bowed kobyz for added color and atmosphere, as well as the band’s own identity.

Despite all of the positives, however, the album is not free of problems. Main among them is that, outside of occasional flashes of creativity, the album lacks originality. ZaRRaZa‘s material sounds so much like Deicide, Malevolent Creation, and Vital Remains that people might want to skip Rotten Remains if they’re already familiar with the genre. One really needs to love this kind of music being revived in order to like what ZaRRaZa have to offer.

Some metal fans have a fetish for everything “old school.” The pure and simple stuff that I heard on college radio as a teenager in the 80s gives us metalheads a warm and fuzzy feeling. But then we’re sad when we realize that some of these bands have made the same album over and over again since the 90s. (I recall a certain outfit who’ve “Cannibalized” their back catalog for their set list at the show I saw last Saturday, but I digress.) Part of the problem could stem from older bands not feeling they need to try, since they already know what their fans want. Newer bands like ZaRRaZa sometimes pop up to bring back older kinds of metal with more energy and enthusiasm. Whether or not you consider that a good thing will determine whether you can enjoy this album.

ZaRRaZa – Rotten Remains
THE BOTTOM LINE
Well-executed brutal death metal that, while good, is not exactly pushing the genre forward.
Reader Rating0 Votes
POSITIVES
The music follows a tried and true formula
A respect for grooves give the songs a fun, almost upbeat feel
Quirky inclusion of kobyz, throat singing, keyboards, and other atmospheric touches
NEGATIVES
Some of the riffs sound like they’ve been shared between the songs with only a few changes.
3.5