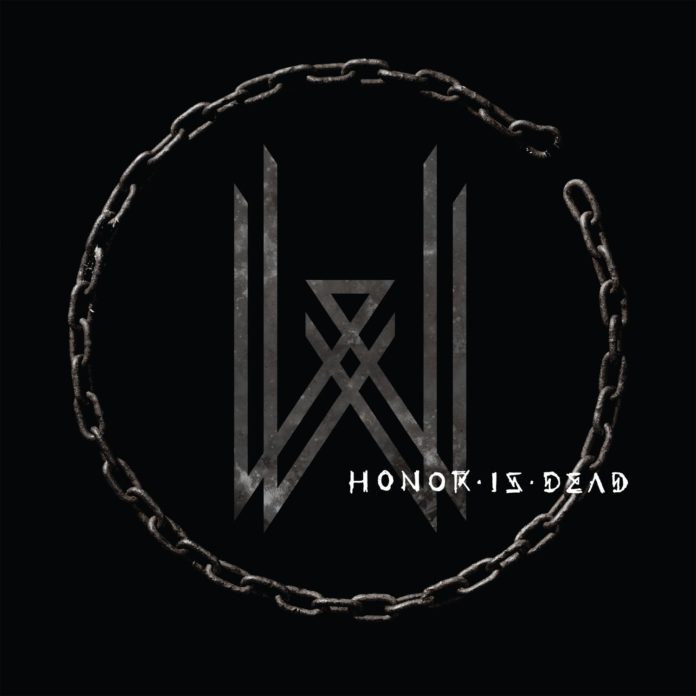 Wovenwar are not As I Lay Dying 2.0. Although this should be a pretty obvious statement by now, it bears repeating. Despite the fact that Wovenwar consist almost entirely of former AILD members, the music they’ve produced is cut from a fairly different sonic cloth, thanks in part to vocalist Shane Blay of Oh, Sleeper. Not only that; Wovenwar’s debut proved to be a pretty divisive release, due to the extremely melodic nature of the vocals (there were almost no screamed lines at all), so this is why I say, again, Wovenwar are not AILD.

With Honor Is Dead, the band continues to distance itself from their past by continuing to pursue a more melodic approach, though this time with a noticeably more aggressive tone than its predecessor. The vocals have a harsher edge (yes, there is a lot of screaming on this record, fear not) and even the riffs pack a heavier wallop. The second track, “Censorship,” for instance, starts off with a pretty savage thrash-like riff, with the vocalist howling angrily, delivering almost exactly what fans of the band members’ previous outfits expected on the first record. The guitar work is punishing, precise, and walks the fine line between melodic and brutal, creating the perfect platform for Blay’s scream/sing vocal style. The result is a more fully-realized sound, better band chemistry, and stronger tunes; “Stones Thrown” is a great example of this, with its jagged, pummeling riffs, snarling vocals, and melodic chorus working together to become a solid metalcore tune. There are hints of Oh, Sleeper in “Stones Thrown,” particularly in the mathy time-signature, and the way the melody floats over the churning heavy riffs.

It’s safe to say Honor Is Dead is a more mature release, and with the darker tone (both musically and lyrically) fans that were turned off by the overly melodic nature of Wovenwar will probably enjoy this record a bit more. That being said, Wovenwar are still just a tad formulaic in their approach to metalcore; there’s usually a heavy riff with angry screaming to start off a track, followed by sweeping melodies and soaring vocals on the chorus, and breakdown oriented bridge, with a tasty guitar solo. “Cascade” is a great example of this approach, though something similar could be said of much of Honor Is Dead. Still, this formula is one that the members of Wovenwar have collectively trailblazed for the better part of the last two decades, and it works well for them. Take “Bloodletter,” for example. It might be shamelessly melodic and formulaic, but I’m drawn to it because, like the rest of this record, there’s a sense of sincerity in the approach taken by the musicians, and a sense of desperation in the vocals that leaves me wanting more.

The production of the record is crystal clear, which is par for the course for this group of musicians who, after all, have been members of this scene for longer than some of its fans have been alive. There are guitar overdubs galore, layered vocals, and even some electronic ambience, as can be heard on “Silhouette,” without sounding overproduced.

With strong musical and vocal performances, Wovenwar have crafted a record that allows the band to stand on their own merits, no longer being overshadowed by the ghost of AILD. If you like a lot of melody in your metalcore, this will definitely be to your liking, though there is still a healthy level of aggression present here to churn up a few moshpits in a live setting.

IN A NUTSHELL
Wovenwar's sopohomore effort shows a more mature, seasoned band, with a grittier edge
Reader Rating1 Vote
POSITIVES
Great production
Good mix of melodic singing and screaming
A more aggressive and dark tone
NEGATIVES
Fans might still find the music a little too melodic compared to AILD
Song structures are a tad formulaic
4.2
Support the band (and US!) by purchasing their albums!
Amazon USAmazon UK