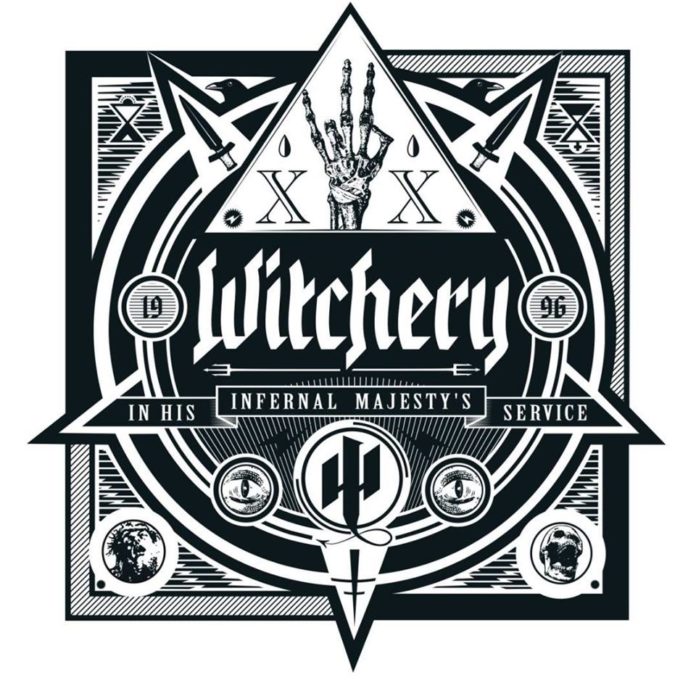 Closing in on nearly 20 years of existence, Witchery have created some of the fiercest black metal-influenced thrash records in extreme metal.After nearly 6 years since their latest release, and armed with a new drummer and vocalist, Witchery are set to take the underground metal scene by storm with their latest offering, In His Infernal Majesty’s Service.

The first thing that really sticks out about the album is the production and tone. While Witchery haven’t ever really come across as over-produced, this offering is definitely more raw in its approach. “In Warm Blood,” for instance, sounds like classic late 80’s thrash, like an unholy unity between Overkill and Celtic Frost, though at a somewhat more medium-pace. New vocalist Angus Norder has a pretty venomous growl that matches the dark tone provided by the instruments, particularly on heavily blackened tracks like “Gilded Fang.” There are a few moments that have a slightly more death metal-oriented sound, like “Eye For An Eye” and “Nosferatu,” both of which have riffs that are a little reminiscent of The Haunted (which makes sense, considering Patrik Jensen plays guitar for them as well). While Witchery have drawn comparisons to Skeletonwitch over the years, I think with this record, a more apt comparison would be fellow Swedish black metal outfit Nifelheim, who have a similarly reverent approach to creating old-school sounding black metal.

While the music presented here is heavily influenced by black metal, it’s still essentially thrash metal, complete with killer melodic solos (check out the face-melter on “Eye For An Eye,” for instance). Witchery really are masters of the blackened-thrash sound, taking the heavier end of thrash and giving that extra push into a darker territory, while including some great guitar solos for good measure. The production is fairly bare-bones throughout, with “Escape From Dunwich Valley” being the most atmospheric sounding track, thanks to the gothic church organs at the beginning of the song. Otherwise, In His Infernal Majesty’s Service sticks to a no-frills thrash onslaught, letting the riffs and attitude do all the talking. With solid songwriting and the vocals/instruments all bringing their A-game, Witchery have crafted a pretty enjoyable, heavy record that will likely catch the attention of new and old-school fans alike. You get the best of both worlds with this band, and any fan of extreme music should add this record to their collection immediately.