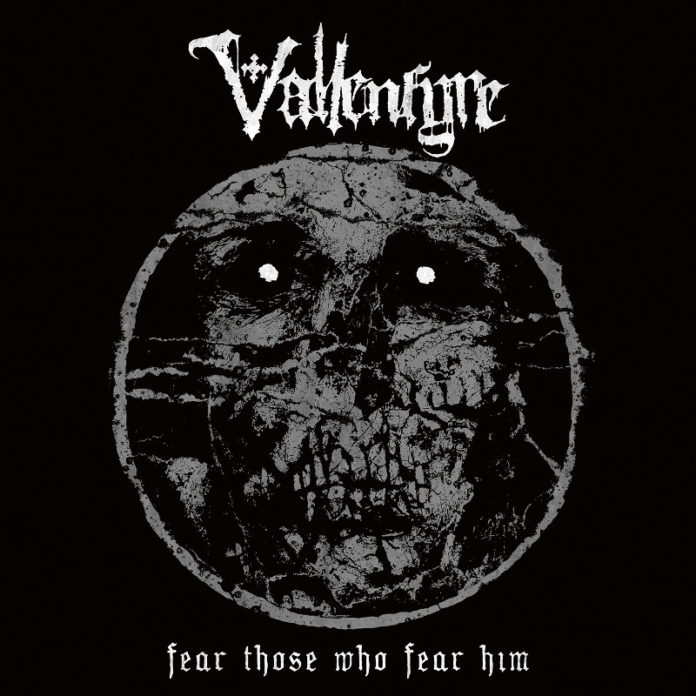 With their third album, the three-piece of Vallenfyre do a chainsaw act with various forms of metal, hacking them up and slapping them back together in a way that’s brutal, violent, and hellishly good. Fiery, near-blackened grinds of death metal drum-blasts and crunchy guitar slam headfirst into aggressive doom swells from the bass, the rasping vocals cover as wide a gamut as you’d care to name, and the punkish sense of defiance brings it all together

Listening to the album, I was reminded of the fusion Earthling brought out on Dark Path, though FTWFH had its guiding lights more in the realm of thrash than that debut’s heavy metal template. Maybe it’s due to the production being so thin on gloss, but there’s a lot of this album that gave me flashbacks of bands which had their hey-day in the ’90s, Atrocity being a recurring mental pop-up in that category. There’s a similar sense of discovery to the music, as though Vallenfyre have really managed to set aside all the influence or conformist pressures that might be felt from similar acts and their respective fans, choosing instead to simply carve out what sounds good and interesting to their own ears. Of course, simply wiping away all of those external forces is impossible, but the album makes a convincing play of it anyway, feeling blisteringly raw and refreshingly unpretentious. It’s a vibe that’s incredibly hard to come by in these days of homaging, retro acts, metamusical commentary, and other excuses for recycling without putting a new spin on things, and one that has me wanting to get my Goddamn car stereo working again just so I can put this on and crank it up while racing down the interstate.

That may sound hyperbolic (or like self-indulgent writing), but it’s also genuinely how I feel. Listening to as many albums a week as I do, the similarities in musical shortcuts start to stand out across multiple genres, but metal is one where it comes out the worst. There’s so much baggage with precedence and legendary groups, and so many occasions in which bands trumpeting their intentions of ‘breaking all the rules’ have turned out to be painfully shitty, that to hear something like FTWFH and get excited by its content is a notable occasion for me. Hearing them run a riff to its logical finish, and simply ending the song then, instead of wearing it thin for another three cycles, has me grinning like a dope. It’s lean, believably angry, and damn stylish, and Vallenfyre make it seem so natural to keep things from getting bloated that I have a feeling I’ll be harder than usual on the next few metal groups I hear.

It’s not perfect, because if it was, it would be overpolishing something that needs to be rough to fully satisfy. There are moments in which the guitar sounds a bit too thin, or the mix gets scooped too deep in the midrange, or the vocals overpower the rest of the instruments, etc., etc. But there’s such a momentum of energy, and so many points at which the music just picks up more acceleration or anger, that it all works fantastically.

THE BOTTOM LINE
Fucking solid metal that doesn't worry about coloring inside the lines
POSITIVES
Metal as Hell
Low on fat
Distinctive and high on character
NEGATIVES
Some minor mixing issues
Grooves go by too quickly to really grasp them the first few times they're heard
Most of the singing leaves lyrics unknown
4.5