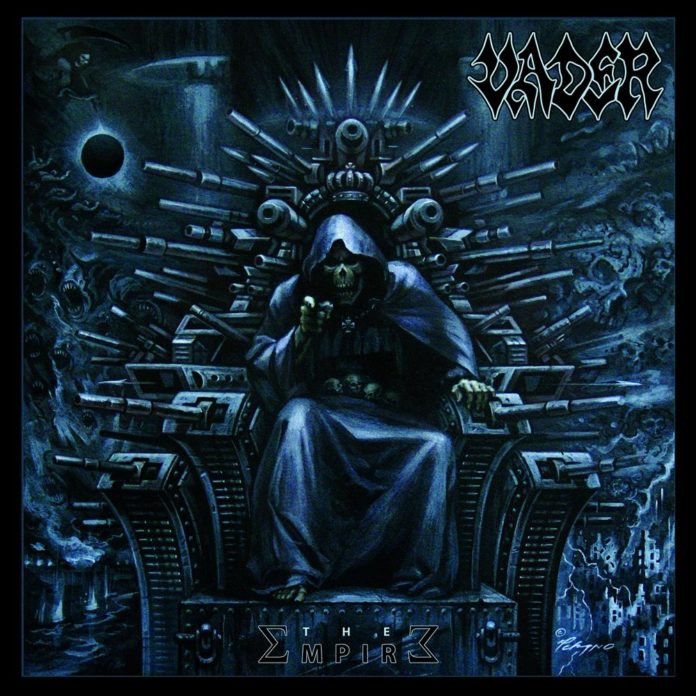 Vader are a death metal band that need little introduction; hailing from Poland, Vader, led by vocalist/guitarist Peter Wiwczarek, have been slaying for over 30 years. The last few records have been a pretty impressive winning streak, with Welcome to the Morbid Reich and Tibi Et Igni setting new standards for brutality. Earlier this year, fans got a taste of new things to come, with the release of the Iron Times EP, featuring 2 brand new songs, and two covers, one of which pays homage to the almighty Motörhead. If, like me, that EP left you hungry for more, then I have great news; the Polish metal masters have unleashed a new salvo of sonic warfare in the form The Empire.

Vader waste absolutely no time in letting you know what you’re in store for, with opening track “Angels of Steel” blasting out at full volume from the very beginning. Track after relentless track mows down all those that would oppose this mighty war machine, with blazingly fast thrash-oriented riffs, Peter’s trademark gruff vocal delivery, and thunderous drums. If you grabbed a copy of Iron Times, you’ve heard “Prayer to the God of War” and “Parabellum,” but you’re given a little more context this time around, with both tracks fitting perfectly into the flow of the album. The closest to breathing room the listener is given is the mid-paced main riff on “Iron Reign,” which has a classic heavy metal vibe, but even on this track, there are a few speed-demon moments, complete with double-bass drum kicks.

The lead guitar work adds an extra layer of depth to each track, though I wouldn’t really call the rhythm guitar work overly simplistic either. “Feel My Pain” takes another classic sounding riff, messes around with the time signature, and then speeds it up, creating a sound that only Vader could pull off. There are no strings, synthesizers, samples, or spoken word bits on The Empire, just pure death/thrash metal fury, played with an almost machine-like precision. The biggest thing that stands out is the old-school vibe some of the chord-progressions give off, but not in a “I’ve heard that before kind of way,” but more in a tribute to the great classic speed metal bands of yesteryear. If you were to add clean vocals and slow down the pace on a few of these tracks, they’d almost pass for Judas Priest songs, which is truly a compliment.

The production on The Empire really showcases each instrument, giving each member of the band enough clarity in the mix to stand out, without stealing the spotlight. There doesn’t seem to be an overabundance of extra guitar or vocal tracks, which gives the record a more natural, lean tone, and emphasizes the brutality of each riff. Vader have managed to keep a pretty consistent sound over their long, storied career, and that streak remains unbroken with this latest offering. That Peter and company manage to sound just as vital and relevant to the death metal scene as they did when they helped create it is a true testament to the band’s songwriting ability. The Empire may be brand new, but I dare say that it is quite possibly one of the best of the band’s career, and will likely be viewed as a death metal classic. Strap on a helmet, grab a copy of this album, and prepare for war!

Fast and furious new release from Vader, which is destined to be viewed as a death metal classic.
Punishing pace that never lets up
Excellent production
Furious riffs with a few nods to classic-sounding heavy metal
The album could have been longer
5