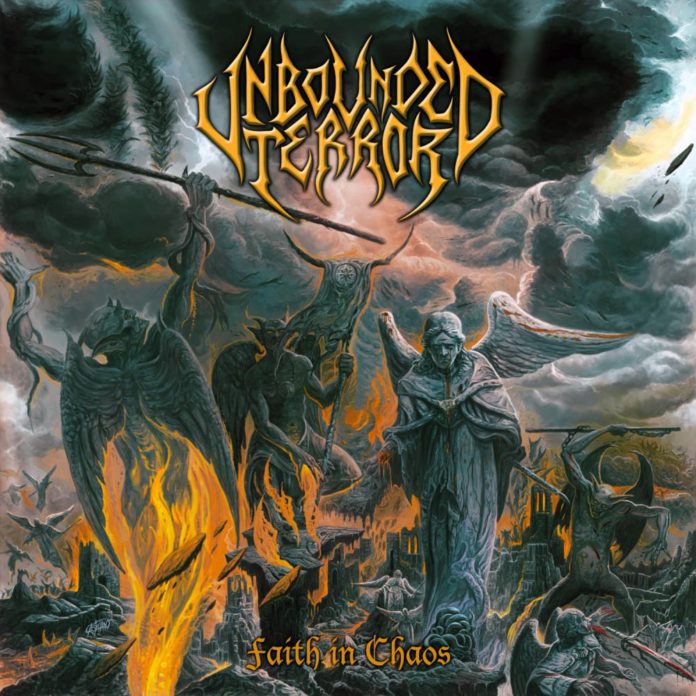 Spain has given us some great death metal bands over the years, such as Teitanblood, Wormed, and Avulsed. Another band that helped found that scene is Majorca’s Unbounded Terror, whose debut full-length album, Nest of Affliction, holds the distinct honor of being the first Spanish death metal record to be released on vinyl, CD, and cassette. Unbounded Terror, however, had a very short run, and called it a day in 1993, with lead guitarist Vicente Payá going on to form the death/doom band Golgotha. 27 years after calling it quits, Unbounded Terror have re-emerged, albeit with a brand new lineup, which sees Vicente Payá as the only remaining original member. Anxious to carve out a new path of destruction in the Spanish death metal scene, Unbounded Terror are releasing their first full-length record in 28 years, Faith in Chaos.

Having been a part of the early 90s death metal scene, it’s no surprise that Faith in Chaos has a distinctly old-school sound. Nearly 30 years is a long time between records, but in this instance, the sound produced by Unbounded Terror has aged like fine wine. Faith in Chaos contains 9 tracks (the first track is simply an intro piece) of blistering classic-sounding  death metal in the vein of bands like Entombed (particularly their early material), Grave, and Dismember. The riffs are absolutely ferocious, and often alternate between blinding speed and mid-paced gallops, as can be heard on “Silent Soul.” While the band never quite moves into brutal or technical death metal territory, they do cover a lot of sonic ground, with the lurching, monolithic verse riff on the aptly named “Insidious” delving into death/doom territory. “Destroyed From Within” has a bit of a thrashy punk vibe to it, while “Through the Flesh We Will Reach Hell” has some groove-oriented riffs, complete with Zakk Wylde-esque pinch harmonics.

Despite the variety of sounds, Faith in Chaos manages to keep a uniform tone, and it’s clear that Vicente Payá has great songwriting chemistry with his new bandmates. There is honestly not a single misstep here, as it’s a perfect old-school death metal record, through and through. The production does a great job of giving the listener a healthy dose of each instrument in the mix, and I’m particularly impressed with how clear the bass and guitar tones are, particularly since the guitars sound like they’re using that super-fuzzy overdrive pedal a lot of the early Swedish death metal bands were so fond of. “Silent Soul” is an excellent example of what I mean; despite the fuzzed-out distortion on the guitars, guttural vocals, and blasting drums, you can hear each member of the band with absolute clarity. In less capable hands, that sound could easily get murky, even without the overdubbed guitars, of which there are plenty. As it stands, Unbounded Terror may have been dormant for nearly 30 years, but Faith in Chaos shows that they are a force to be reckoned with. If you’re a fan of classic European death metal, you’ll want to pick up a copy of this record, and crank it up nice and loud!