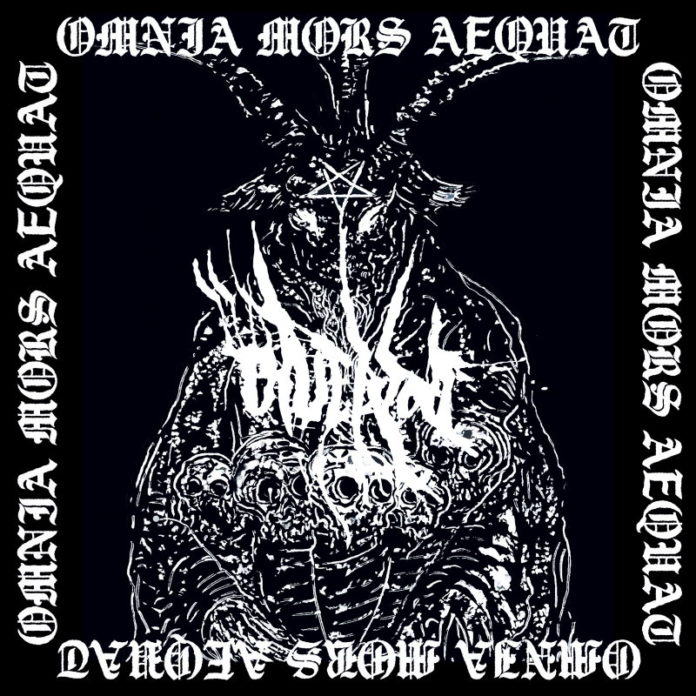 Picking up from the remains of Nihill (due to the passing of founding vocalist M.), guitarist Vitriol has formed Ulveblod, with their first album focusing on a raw and intense form distillation of black metal. Packing just five tracks (one of which is twenty-one minutes long), the atmosphere of Omnia Mors Aequat is undeniably one of aggression, steeped in magikal seasoning.

From the roar of the first track, “Purified by Fyre”, on through “In The Shadow Of Sephirah Keter”, “Chaosophy”, “The Dying Wound Of God” (the aforementioned monster-sized song), and “Seven Heads and Ten Horns”, Ulveblod keep things harsh, fast, and unrelenting. Despite running about five minutes each, the first three songs do end up feeling like they’re basically just a lead-up to “The Dying Wound of God”, which understandably ends up dominating the album-listening experience. Without that elephant in the track-list, they’d be more than solid modern black metal entries, and a punchy EP with which the new incarnation of the band could debut itself. There’s compelling rhythms, nice work with additional texturing (the shriek of metal rasping against metal in the background of “Chaosophy”, for instance), and believable anger behind the playing.

“The Dying Wound of God” takes those qualities and expands them to deep immersion, with the band sinking into a pressurized whirlpool of drum-beats, guitar keening, hectic feedback, and howling vocals. It’s almost an experiment in listener endurance, as the shifts in the song come very gradually, worming their way into the structure instead of violently turning it. As a result, while the prolonged wrath is impressive, it also gets kind of boring by the midway point.

Album closer “Seven Heads and Ten Horns” puts a bit of salve on that dullness, rising back up to a raging pace, but by then, the album has already dragged on for too long for it to make much of a recovery. It’s all executed with respectable technical skill, and the concept of the big agonizing track is understandable, but the final result ends up feeling underwhelming. Do some at-home editing by simply dropping the big track out, and you’ve got a fiery little burst of an EP.

Ulveblod – Omnia Mors Aequat
THE BOTTOM LINE
Harsh black metal that pulls few punches, but ends up the victim of its own ambition
Reader Rating0 Votes
POSITIVES
Achieves its intended atmosphere quite well
Strikes an effective balance between raggedness and impact in the production
NEGATIVES
The album's central track is undermined by its own duration, which ends up sinking about half of the album under its weight
3.5