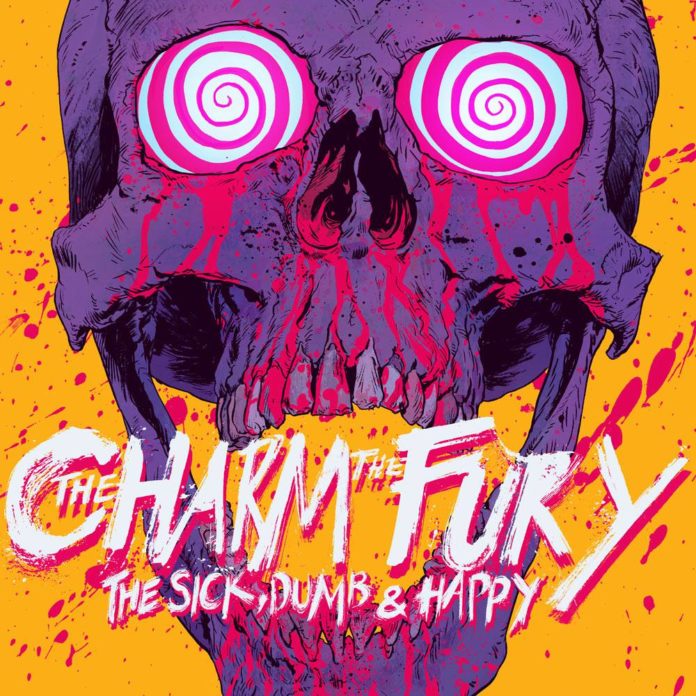 It’s often said experimentation leads to innovation, a notion that is especially true in metal. By trying new tunings and experimenting with different guitar strings, Tony Iommi was able to play guitar again after the accident that nearly ended his career as a guitarist before it could really take off. Throwing in a little punk and hardcore into the death and thrash metal genres gave us grindcore, and black metal (at least the second wave) was born out of a rebellion against death metal, particularly in terms of production values. A multitude of sub-genres and bands have been born as a result of thinking outside the box, and it’s always exciting to find bands that like to try to push the boundaries. Amsterdam’s The Charm The Fury are an example of such philosophy, as The Sick, Dumb & Happy, their new offering, presses forward with new tones and textures.

The Charm The Fury are probably best described as a mix of metalcore and groove metal. Essentially, if you mixed the sounds of mid-era Slipknot, Pantera, and Machine Head, you’d get The Charm The Fury. Vocalist Caroline Westendorp displays a pretty impressive range of styles, from harsh, aggressive screams, to clean singing that at times is sometimes smooth and poppy (check out the chorus on “Echoes”), and at other times somewhat raspy, in the vein of Chester from Linkin Park.

The Sick, Dumb & Happy never really stays in one place, however, with each track offering up something a little different from the rest of the record. A great example of this is the transition between “The Future Need Us Not” and “Silent War,” with the first track being a chaotic, brutal beatdown of metalcore fury, while the next track is a melancholy, acoustic-driven power ballad. Unfortunately, this characteristic is also a reason why this album doesn’t quite hit the mark: while I always applaud bands for trying not to conform to any particular style, some bands try to do a little too much. Rather than coming across as “experimental,” The Charm The Fury sound a bit like they’re trying to throw everything at the wall, and see what sticks. This is a shame, since they sound their strongest when they’re going for the throat, like on “Weaponized” and “Break and Dominate.” There are plenty of great riffs, and memorable moments throughout the album, but there’s just a little too much change in each song to make The Sick, Dumb & Happy a consistently good record. “Echoes,” for instance, has some heavy, groovy verses, but then the chorus goes into total pop-rock territory, which just has the effect of softening the rest of the material.

The Charm The Fury show a lot of promise, and with a little more focus, could really become a force to be reckoned with in the metalcore/groove metal niche of heavy metal. The Sick, Dumb & Happy truly has some great moments, and boasts a top-notch production, but suffers from trying too much at once in the songwriting department. With a little more balance, though, The Charm The Fury could easily be on par with Slipknot or Machine Head, and fans of those bands will probably find a lot to like in this latest release.

The Charm The Fury - The Sick, Dumb & Happy
Vocalist Caroline Westendorp displays an impressive range of styles
Excellent production
Lots of heavy, groovy riffs to bang your head to
Too many shifts in styles water down the heaviness of the riffs
Some of the choruses come off as total pop rock
3

Sunlight’s Bane -The Blackest Volume: Like All The Earth Was Buried