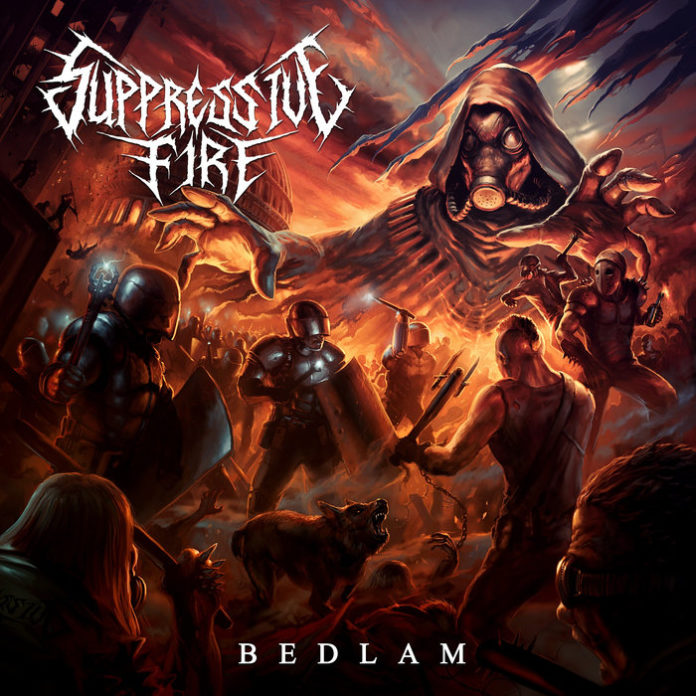 Bedlam, Suppressive Fire’s debut full-length, certainly lives up to its name, containing some of the most aggressive blackened thrash in recent years. It would be easy to compare it to some of the less punk-sounding material by Toxic Holocaust, or a less melodic Skeletonwitch. There are plenty of similarities between those bands, to be sure, and Joel Grind (Toxic Holocaust’s mastermind) even mixed and mastered Bedlam. Suppressive Fire, however, set themselves apart from the rest of the thrash revivalists with a real sense of rage in tunes like “Coup d’état” and “Ironsights.” Those two tracks, particular favorites of mine, feature some of the fastest riffs on the record, and drums that even go into blast-beat territory, which emphasizes the black metal vibe. Occasionally they even slow things down, as can be heard on the intro to “Thy Flesh Consumed,” which helps to break the monotony up.  Vocally, the band goes for for a guttural yell that reminded me of Necrodeath, bordering on black metal styled vocals, though not quite as shrill.

As killer as most of Bedlam is, if you’re not a fan of this kind of thrash then it might wear a little thin towards the middle of the record. Despite the aforementioned change in pace, Suppressive Fire are content in pummeling the listener into submission with a relentless barrage of lightning fast guitars. Fans of this genre (particularly if you like early Kreator and Sodom) will have no trouble hanging with Bedlam, though, and I count myself among those. Bedlam is an exciting release from an up-and-coming young band, and Suppressive Fire will be a household name before too long, mark my words.