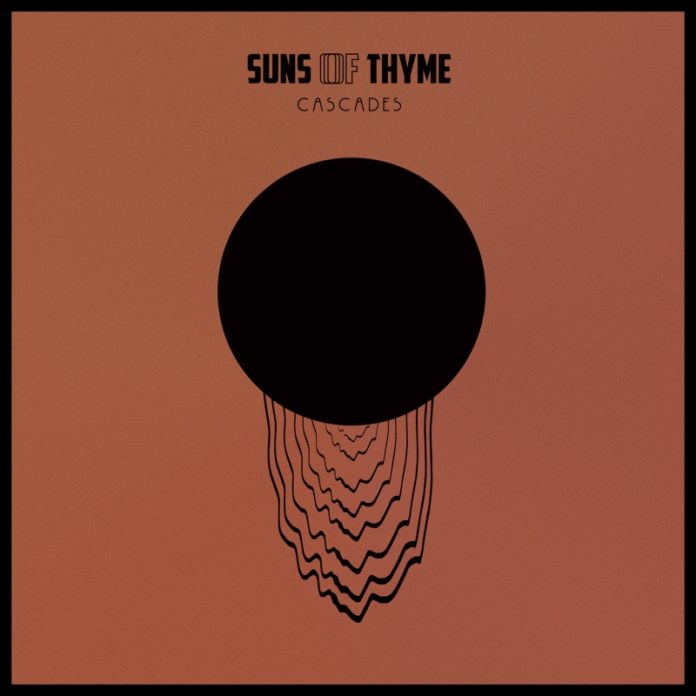 Following up on 2013’s Fortune, Shelter, Love & Cure, the Berlin-based quintet Suns of Thyme now bring their sophomore album to bear, simplifying the titling scheme down to just Cascades. To be fair, the title is one of the few places in the album in which simplicity can be convincingly argued to dominate, as the rest of it tumbles through a set of connections and fusions that rarely settle into predictability.

Musically, the group works a blend of several styles, with the most prominent being psychedelic rock (usually light, though it heavies up in the back-end), post-punk, blues rock, and alternative, while poppiness infiltrates most all of the songs through the melodious hooks. And while it never really rises to full realization, there’s some funk attitude in the way the band keeps things laid-back but technically proficient, casual but cool. Whether strutting along on a snappy drum riff, plonking away on an off-kilter bass-line, or slow-strumming out guitar chords to contrast with harder counter-point, the group juggles its various moods and styles quite well. Part of me wants to point to the track “Deep Purple Rain” as the standout example for this fusion, simply by virtue of its titling, but trying to nail representation of the group’s work on this album to just one piece is insufficient.

While it’s not necessarily a fault, as the band seems totally comfortable with carving out their oddball niche, it can be hard to sync up with their idiosyncrasies and off-beat rhythms. Of course, whether this leads to lackadaisical acceptance, being totally put off, hit-and-miss connections, or whatever other response may arise, is dependent on the listener’s own mood and receptivity; however, it does seem as though, while there may be plenty of people for whom the music just doesn’t fit, those who do fall into its groove will get some major pleasure out of its specialized approach.

In that way, while there are vague stylistic connections between the tracks, each takes its own distinct route in approaching the material, be it in an obvious way, be it by the addition of some horns or wavering synthesizer presence (or the relatively hard riffs of “In Dreams Awake”), or by engendering more of an atmospheric shift. And in contrast to the dozens and dozens of bands which seem to pin all of their hopes for an album on one hard-worked single, Suns of Thyme seem content to let each of the tracks land as they may on the ears of their listeners, letting the diversity behind them find each its own fans.

While I expect it will take a while to grow on anyone, it’s that disinclination to go for easy accessibility that I found myself most respecting once the album rolled to a close. The band is really doing their own thing(s), and though I’m curious to find how my take on the album changes as I listen to it in the future, Suns of Thyme have already impressed me with a set of songs I’ll be turning over in my mind for some time to come.

IN A NUTSHELL
A dreamy album of disparate elements, fused at low heat into something with real character, but not something that tries for major mass appeal
Reader Rating0 Votes
POSITIVES
Strong instrumental technique
Clever song-writing
Good chemistry between the members
NEGATIVES
There's not really a firm line of emotion or attitude to follow through the album
4