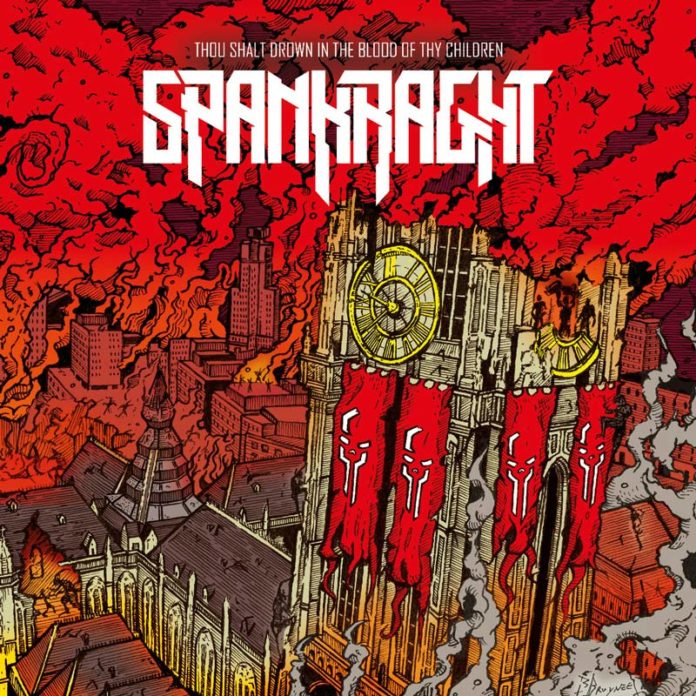 Spankraght are an industrial metal band from Antwerp, Belgium. In Thou Shalt Drown In The Blood Of Thy Children, their second overall release, they show a surprising amount of maturity and focus for such a young band. While that alone might not be enough to make the album appealing to everyone, it can definitely serve as a good introduction to what “industrial metal” means in 2020.

“Industrial” music is an umbrella term for music that sounds completely inorganic, drawing upon harsh sounds and combining them with a punk-ish taste for the confrontational and transgressive. That might sound very similar to metal until the synthesizers kick in. Spankraght dress up some throbbing beats with nasty guitar riffs that would not sound out of place on a Cannibal Corpse album. They dress it all up with samples and simplistic lyrics delivered through hoarse barks, repetitively. Spankraght sound  like a heavier KMFDM or a less obnoxious Turmion Kätilöt.

For the most part, it works. Spankraght combine the most appealing and catchy elements of industrial music and metal, and neither aspect sounds forced into place nor grafted onto the other. The album’s danceable nature does take away from the heaviness, but people who are open to this style of music do not require maximum heaviness in everything anyway. Spankraght play the perfect music for the gym, for a drive to work, or for sneaking into the playlist of an Amaranthe fan as a practical joke. That sort of thing. It works best in songs like “Carnivale” that sound both menacing and festive all at once.

The band touts Thou Shalt Drown in the Blood of Thy Children as a concept album about the current state of the world, but the faux newscast at the start of album opener “Synopsis” evokes a more apocalyptic theme. This in turn implies the obvious contemporary notion that the world is on the verge of a collapse. “Hoop” (“Hope”) and “Resilient” reference a female child who offered a glimmer of hope the the world, before being untimely silenced. It sounds rather familiar, for some reason.

For anyone curious about what industrial metal sounds like in 2020, Thou Shalt Drown in the Blood of Thy Children offers a good introduction. People who already love this kind of music will find plenty to appreciate on it as well. Spankraght might not have something for everyone, but they have enough.

Spankraght – Thou Shalt Drown in the Blood of Thy Children
THE BOTTOM LINE
Spankraght made an album that will make great introduction to industrial metal for those who aren't sure about whether or not they like that sort of thing.
Reader Rating2 Votes
POSITIVES
A seamless blend of metal with industrial music
Frantic atmosphere
You can dance to it
NEGATIVES
Way too “niche” and overproduced for most people
The album’s concept is a cliché
3.5