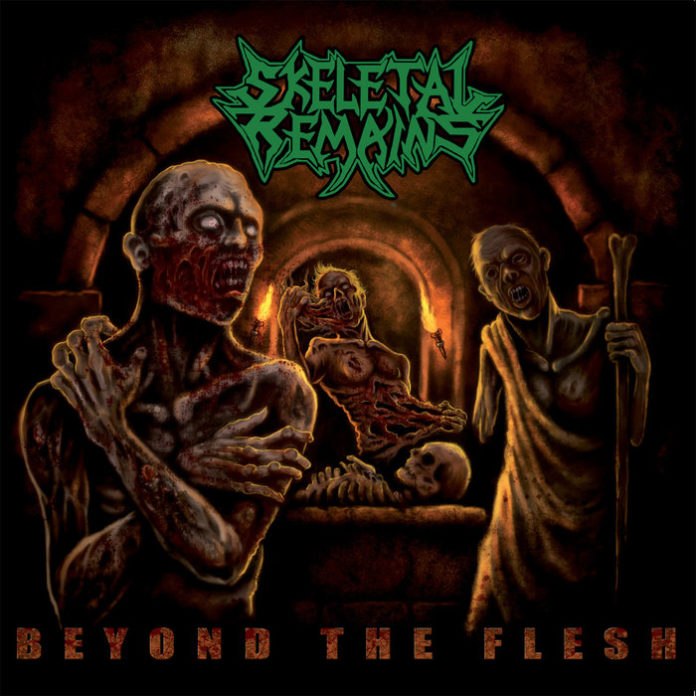 There’s a huge division between the death metal community and we all know it; American vs European. We all take our sides; some of us choose the west and proclaim the leaders of the genre to be Deicide, Cannibal Corpse, Possessed  and the like. While others, side with the works of early Sentenced, Carcass, and At The Gates. I’m sure that this has caused to many arguments that it’s resulted in broken homes and split communities, it’s understandable. It really is. However, there are several bands out there that take the influences of both and meld them together; Skeletal Remains is indeed one of those bands. Beyond the Flesh is a stylish and fine tuned death machine that delivers on multiple levels with its mix of both European and American influences in not just the death but also in the thrash genre. And though it stumbles a few times through careless production, Beyond the Flesh doesn’t disappoint and is amongst the most promising debuts of 2012.

Beyond the Flesh is a study in fusion of early European death metal (think Rotting Ways to Misery and Indecent and Obscene) mixed with Death, Possessed, Bolt Thrower,  and a good measure of the more extreme thrash bands like Slayer, and Pestilence. Without a doubt, Skeletal Remains exists within a pocket of time in extreme metal phase of the early 90’s; the vocals contain that “open mouth” sound that Dismember used in their early albums. In fact, many of Skeletal Remains‘ tracks even feature that trademark “ooaah” that was so well known to bridge between intro and verse riffs.  The sound behind that of Beyond the Flesh is soaked in that analogue warmth of the era of the 90s and is a great change from that brittle and often cold sound of digital recordings. Most of the tracks also have that certain “bounce” that was so popular in the 90s (think “Toxic Waltz”). You’re 100% excused if you start a mosh pit in rush hour pedestrian traffic.

All in all, what this translates to is a very enjoyable experience. Sometimes, you can hear the love oozing from the speakers and I can definitely here it here. Often times when reviewing lackluster albums, you wonder why bands go through the painstaking effort of recording an LP and not actually try when they get in the recording studio. But not here, Skeletal Remains have been given a chance and are running with it. I’m sure when these guys set out to form the band they didn’t set out to make a simple or even current sounding death metal band, they set out on a project of love, to create a band that, if one didn’t know better would think is pulled straight from the 1991 catalogue of a label like Nuclear Blast.

While some albums struggle to find a voice, Beyond the Flesh has some absolute beasts of tracks; “Carrion Death” and “Homicidal Pulchritude” are intensely tight and progressive tracks, with mile-a-minute picking and several “on a dime” stop and starts that will leave going “Daaaaamn.” The tracks are rife with influences from Schulinder, King and the sweet sweet sweep picking of Brendon Small. That being said, Skeletal Remains is not a cheap cover band by any means. If anything, the musically skillful assault that Skeletal Remains showers upon the listener track after track prove that without a shred of a doubt, these guys know how to play ball, track after track they manage to hit it out of the park.

As an album, Beyond the Flesh, works fantastically well, and  though it suffers from slight repetitiveness, it’s nothing that won’t be overshadowed by the quality of the tracks from beginning to end. If only Skeletal Remains had been more observant of the awkward 7 second silences at the end of some of the songs, we’d have a near perfect album. However, these are all small things that can an probably will be covered in upcoming releases. And, as time goes on and Skeletal Remains evolve into an entirely different musical machine, the masses of fans will be there eagerly listening, regardless of their geographic alliance to death metal.[signoff predefined=”Signoff 1″][/signoff]