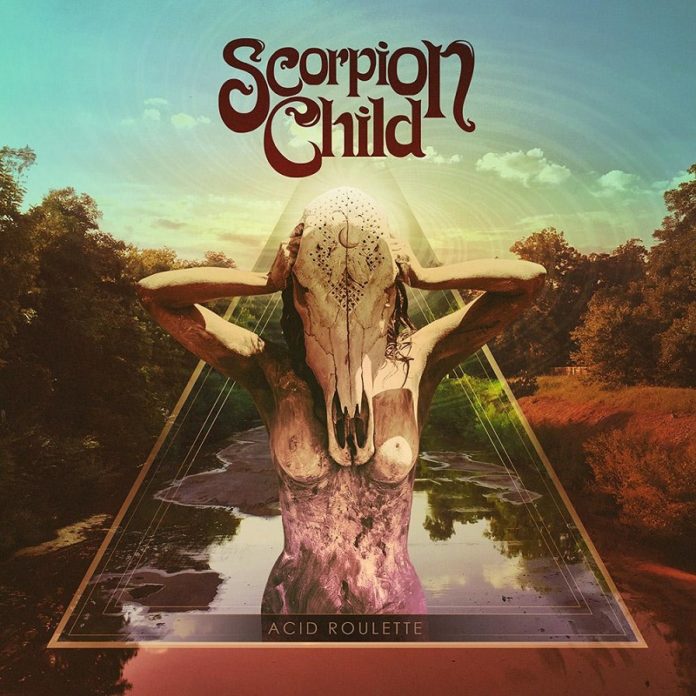 If the cover of an album is a naked lady wearing an animal skull, I think that you can expect some serious distort and psych in the sound. Acid Roulette is no exception to this rule, as here Scorpion Child ignite their sound in a clash of old-school bombast and stoner haze.

The band’s dedication to fuzz is remarkable. Nearly every track has sections that sound like somebody’s leaning on Jon Lord’s organ, accompanied by groovy bass riffs. Couple all of that with Black Sabbath sensibilities towards tempo, and it’s impossible to resist getting swept up in the flow and ebb of the music. While the retro vibe is well-executed, the album is more than a tribute or a one-trick pony. Acid Roulette is an explosion of sound that subscribes to the belief that louder is better and rewards listeners with a buffet of crushing riffs, funky rhythms, and harmonies.

The most unique aspect of the album is the lack of solos. Whenever Scorpion Child sound like they’re building up to the token guitar solo, they choose instead to take an unexpected turn. Rather than amping up the guitar and having it steal the spotlight for thirty seconds, the strings take a massive hit of distortion and are pushed way back. The percussion and bass take the lead and only the ghostly image of a solo wails in the background. The breakaway from tradition is refreshing and puts a creative spin on possibly the oldest of rock/metal tropes.

Although Acid Roulette possesses many positive qualities, it is not flawless. The vocals on are particularly grating and one-toned, often sounding like Axl Rose circa Chinese Democracy. One song does switch up the vocals, but takes on an ill-fitting progressive rock taste that neuters the groove and energy the rest of the album works so hard to establish. Also, there is a minute-long song that is simply a ritualistic chant that Scorpion Child probably hoped would conjure a story into the album, but that actually fails spectacularly and kills the mood. The good news is that the vocals are reasonably tuned back and the chant can be deleted without losing any content.

Acid Roulette is an exciting romp through an old brand of hard and psychedelic rock. The non-stop energy and healthy overdoses of fuzz make for a performance that is scary easy to rock out to. There are some problems with the album, but most can be fixed; plus, if sub-par vocals stop you from listening to good music, then you’re already missing out on a lot of quality material. If you like smooth grooves and a gripping tempo, grab yourself a glass of Brandy and pull up a stool at a Scorpion Child show.

IN A NUTSHELL
Needs a small tuneup, but don't let that stop you from giving it a spin.
POSITIVES
Meeting of old school style with new wave techniques.
High energy and engaging.
NEGATIVES
Below average vocals.
Some useless content.
4