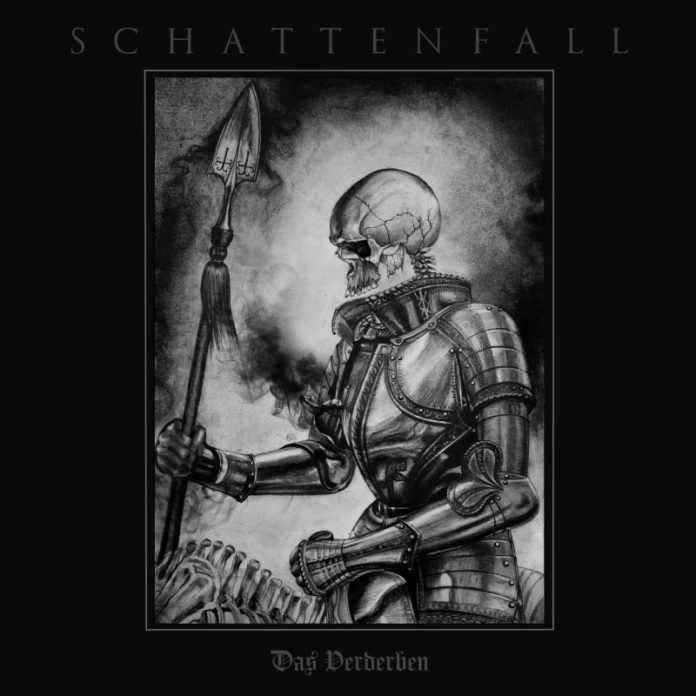 Coming to us from Germany, this black metal release is sort of a concept EP, with its lyrics formed entirely from the works of German poets. Drawing from Johann von Goethe, Gottfried Benn, and Heinrich Heine, there’s certainly a dust of antiquity to be felt with the influences (being that two-thirds of them were born in the 18th century), which makes for an interesting mesh with the iconoclasm of black metal.

“Totentanz” starts things off with a slow and measured rhythm on cymbals and subdued strings, before the venomous vocals roar in alongside the drums and electric guitar. The song’s intensity continues to rise from there, with blast-beats, vocal echoes, and background wails fleshing out the atmosphere. There’s a depressive weight providing emotional ballast to the howls and beats, and the spiraling effect of the main guitar riff effects a strong pull.

In “Abschied,” the second (and shortest) track, the music pushes to a rawer attack, though with a slower overall tempo. The rolling rumble attacks from the drums contribute significantly to that leveraging, as does the whiplash on coming back from a whispered interlude. The pushing of the vocals to a wounded timbre in parts makes for stimulating nuance as well, and a neat change from the standard rasping.

Lastly, “Der Schiffbrüchige” hits a firm groove right from the start, and stays strong to the end. Touches of eastern-sounding strings give a mystical underscoring to points along the way, while a pair of roaring vocal sections feels as though they’re invoking some distant power. The drummer’s work on this track is perhaps my favorite showing from him on this release, with compelling rhythms and balance of dynamics really bringing it to life. Sadly, once this song’s over, that’s the end of the EP. Respect to Schattenfall for their quality song-writing on this, and here’s hoping that their next release runs to LP length.