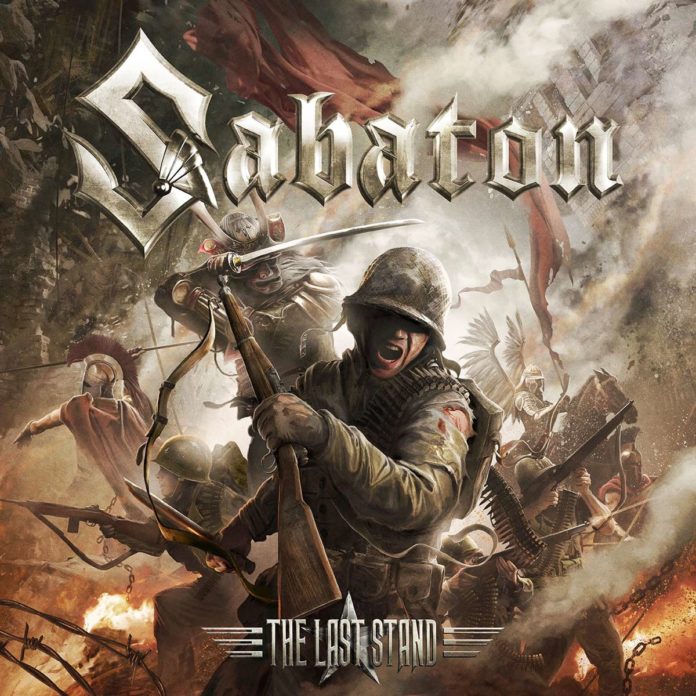 Although, perhaps understandably, a big part of Sabaton‘s music has focused on stories from WWII, I’ve specially enjoyed it when they depart from the 1939-1945 period, covering also other episodes. Their 2012  album Carolus Rex is, of course, the best example of this, though some other songs here and there have also touched upon other subjects. With this in mind, and even though I know that the quality of their music is not necessarily dependant on the specific stories they cover, I was happy to see that The Last Stand, Sabaton‘s newest effort, had actually shifted themes almost completely, only covering WWII in a single song. As a history buff this is great for me, since it gives me a nice opportunity to either hear dramatizations of battles I’ve already read about, or to hear about them for the first time.

As far as coverage of historical events goes, The Last Stand is Sabaton‘s most ambitious release to date. They go all over, from the Battle of Thermopylae in 480 BC (“Sparta”) to the Battle for Hill 3234 in 1988 (“Hill 3234”), with a mandatory stop in WWII, telling the story of the Battle for Castle Itter (“The Last Battle”), as well as plenty stories from WWI. Although in and of itself this variety does not really say anything about the music, it does go to show that the band tried to avoid a thematic stagnation.

My first impression of the album was not very good, as opener “Sparta” didn’t really catch my attention. It probably doesn’t help that it almost takes a whole minute for the song to start, with the introduction being wasted on a rhythmic loop of someone saying “oooh, aaah.” While the song has a pretty solid chorus, it wasn’t until “Last Dying Breath” kicked in that I really got hooked. With a heavy use of keyboards (on their characteristic EPIC ANIME BOSS BATTLE setting), and throwing in a couple of short solos, Sabaton really delivers the kind of thing that we’ve come to expect from them. Short, straight to the point and, fuck it, powerful.

When I say that Sabaton delivers “what we’ve come to expect from them,” I really mean it. They have developed a pretty trademark sound over the years, and they know how to work within the constraints of that sound. While The Last Stand doesn’t sound like a repetition, and they do try some small different things (a few bagpipes in “Blood of Bannockburn,” the choir-like sound in “The Last Stand,” for example), this is the kind of album that only Sabaton can make. They’re not reinventing their sound, nor are they really going out of their way to impress newcomers (hell, “Winged Hussars” seems like it was just based on “The Art of War”). They’re as cheesy as always, and they do seem to be going out of their way to fill Manowar‘s shoes (though with less homoeroticism). If this is a dealbreaker for you, then you should absolutely walk away.

Keeping these caveats in mind is important. I absolutely love The Last Stand, and I’ve listened to it several times just preparing this review (in my defense, it’s a pretty short release, with most songs being under 4 minutes). Fuck, if my digital copy was a vinyl, I would have already scratched the shit out of it just by listening to “Shiroyama” on repeat. It’s a really solid release, produced masterfully by Peter Tagtren (their producer since 2008’s The Art of War), but I cannot deny that it sounds pretty close to everything else they have released before. In other bands this might mean a death sentence (I can’t understand why people keep booking Alestorm, for example), but, for me, Sabaton somehow make it work.

IN A NUTSHELL
The perfect album for Sabaton fans, with little to attract those who were on the fence.
POSITIVES
Delivers everything you've come to love about Sabaton.
NEGATIVES
Not much in terms of novelty.
Support the band (and US!) by purchasing their albums!
Amazon USAmazon UK