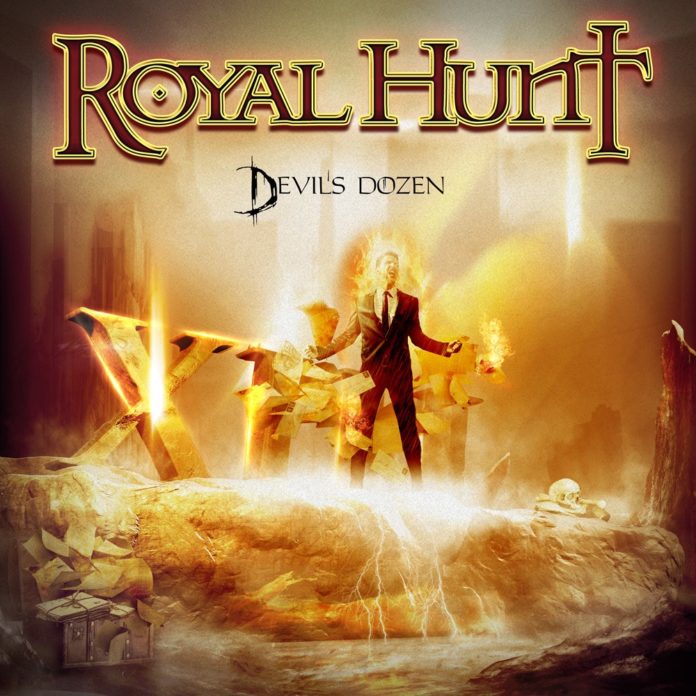 Theatrics and drama go hand in hand with many power metal performances, and when they are mixed with the wacky tempo and lengthiness of progressive metal, they can create a potent cocktail of insanity. Royal Hunt are fully aware of this wicked combo and take advantage of it as they’ve done before, rocketing off into the stratosphere on a spaceship fueled by orchestral music, and unstoppable keyboards.

Devil’s Dozen is not coy about having more drama than your local theater as it greets you with a big and building orchestral intro that the power of the guitar and kick of the drums slice through like knives. While the orchestra never seems to leave the stage, it does take a backseat to the frontmen who put on a formidable show with guitars that lay thick, and speedy riffs that are accompanied by solos that shred through the sound as if it were paper. The vocals take on a tremendous range, from breaking-through-the-ceiling highs to supreme operatic lows; they are often flanked by choral vocals aimed not so much at supporting the main vocals as much as adding character and another level of drama. The theatric stay present and varied throughout the whole album strings, brass and wind sections that punctuate and add a whole other layer to the sound; this allows the band to capitalize and create a seriously epic, boss battle-like, feel.

The one issue with the album is that there is very little variation between the tracks, or within the tracks themselves. While many of the songs clock in at well over seven minutes, in reality they only have enough material for maybe three or four minutes of real variation, suggesting that there is plenty of fat that could have been trimmed. That being said, despite the little diversity in the songs, they still manage to be entertaining for their entire run time, and I found my interest did not wane at all during the meaty run time.

The beauty of Devil’s Dozen does not lie in its intricacies or masterful development, but in the sheer feeling of badassery and rising action that keeps your blood boiling and your brain firing on all cylinders. It is impressive how Royal Hunt manage to maintain such a high level of stimulation, despite exhibiting a rather limited amount of techniques.

Even though by all accounts Devil’s Dozen should be a bloated and uninteresting performance, it manages to turn the table on its head and put on a show that blows away the listener and fully captivates his attention. An incredibly intelligent use of drama and theatrics, coupled with skilled and extremely competent musicianship, makes for an experience that produces a feeling and drive that stays alive and kicking for its elongated lifespan. For those looking for a new soundtrack to slay dragons to, this one is for you.

IN A NUTSHELL
Great album with a lot of kick
POSITIVES
Powerful impact
Dramatic instrumental
NEGATIVES
Technically lacking, and with little variety.
4