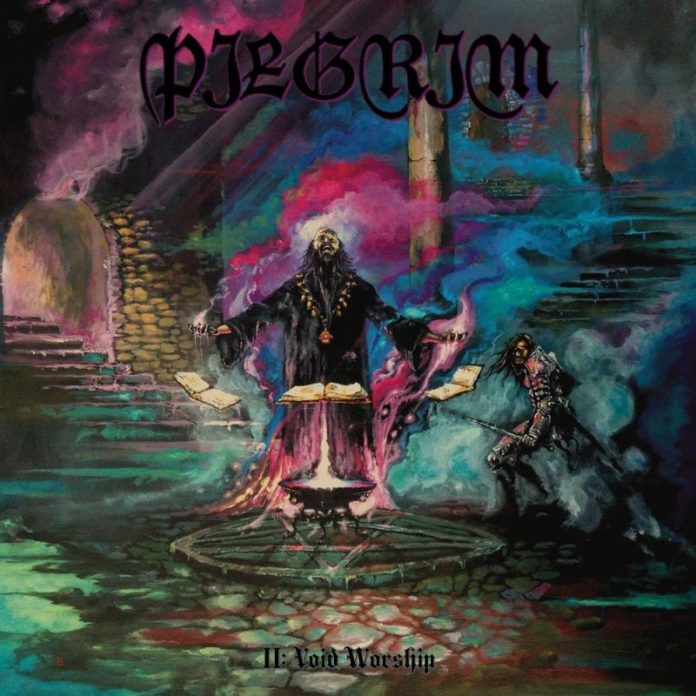 Doom metal is an eternal struggle, a tug-of-war between two inexorable forces. On the one hand, you have overpowering riffs set to a glacial pace, and on the other is the listener’s ever-dwindling attention span. The best doom is able to keep you arrested despite its natural tendencies toward tedium, and on Pilgrim’s debut LP Misery Wizard, they were able to accomplish this feat despite their youth as a band. The riffs were monstrous, the production was beefier than a wooly mammoth flank steak, and the pace was varied enough to always keep you interested. It was a fine doom album, in the tradition of the greats like Candlemass and Reverend Bizarre, and it showed a lot of promise for these new Rhode Island upstarts. But on their second album, II: Void Worship, the band seems to have fallen victim to the dreaded sophomore slump.

Void Worship, in stark contrast to Misery Wizard, is an inconsistent and weakened blend of mediocre doom. There’s moments of brilliance here, like on the opening riffs of “Master’s Chamber” and the title track, but the band seems to lose direction halfway through the songs as they start treading water with the same old riffs at the same languid pace. It feels like a chore to listen to, but it’s especially disappointing because they’ve proven to us before that they know how to construct some excellent doom. I feel like I’m a teacher whose favorite student has just turned in a half-assed final project – it would have been a decent effort from anyone else, but knowing it came from one of the brightest minds in the class is a real letdown.

One of the most baffling stylistic decisions on Void Worship is the inclusion of not one, not two, but several half-baked and meandering instrumentals. I don’t know what the impetus for including these could have been; it’s not playing to the band’s strengths at all. The Wizard’s soaring baritone has always been a major highlight of Pilgrim’s sound, so its omission will leave the listener wanting. And the instrumentals don’t do enough to justify their own existence – “Dwarven March,” for example, plods along with no real sense of purpose. It’s hard to see exactly what the final destination is when the dwarves are just marching around in a circle. And as far as the instrumentals go, that one’s only the primary offender – the rest are just too forgettable to mention.

For all its weaknesses, there’s still glimpses of the same brilliance on Void Worship that we saw with Misery Wizard. Krolg Splinterfist’s drumwork is nothing short of skull-splitting, and the inclusion of the uptempo “Paladin” keeps the record from becoming a complete slog. But even then, this is an album that can’t stand beside its predecessor without being found wanting. There’s a few tracks that will be welcome staples of future Pilgrim live sets, but even more will be left by the wayside – and with good reason. Let’s just hope this is a momentary fluke for the band, and their next effort will reach the same monolithic heights that we’ve come to expect from them.[signoff predefined=”Signoff 1″][/signoff]