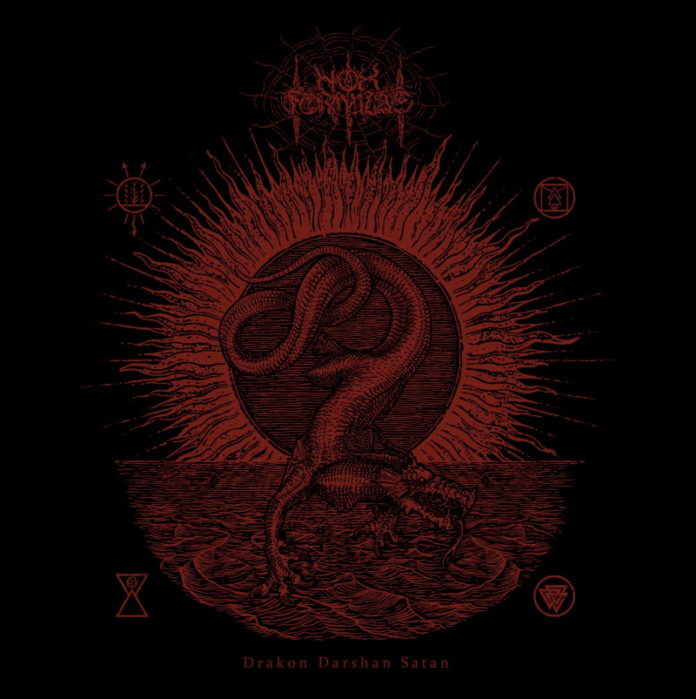 Built around “actual experiences on the physical and the magical planes,” this second album from the Greek group of Nox Formulae wears its ritualistic inspiration on its sleeve. And in these days, when occultism seems almost an afterthought to so many black metal bands, that sort of conceptual dedication certainly has an appeal. Unfortunately, the band doesn’t really deliver on the potential of their premise.

Leading off with hammering rhythms from the start of opening track “Psychopath of NOX”, the band goes for a forceful whirlwind of metal that doesn’t let up until the last minute of the song. At that point, they break for a study of resonance from the bass, letting chords ring out and fade away repeatedly before the vocals return in a whisper, counterpointed by growing guitar ostinato. The pounding beats and raspy growls form the majority of the album’s dynamic aims, diving right back into that M.O. as soon as the second track (“Ravens of Terror”) begins.

Though Nox Formulae remain in high gear throughout a good 95% of the album, they use some little change-ups to keep that persistence from being quite as tiring as it might have been. The call-and-response invocations of “The Black Stone of Satan”, for instance, fight the impression that the band is shrieking into the void, and the breaks and bridges incorporate dissonance without overriding the central tones.

But the album falls into the same problem that many bands endeavoring to deliver a ‘genuinely magical’ (or ‘magickal’) album experience encounter: they don’t have enough musical or stylistic range to make it believable. Of course, there are exceptions (Coil achieved it multiple times), but in the case of Nox Formulae the trenchant commitment to one flavor of black metal (and virtually one tempo) seriously hobbles its ability to transport the listener to a realm of demonic sorcery. There’s very little sense of mysticism amidst all the battering, vocal effects are rare, and the limited selection of instruments makes things far too grounded in the earthly realm.

Given that the “lyrics, mantras, sigils, and additional chants” are credited to the demon Gharrassielh (also the author of “the grimoire At the Outskirts of the Shadow Current: The Dark Initiation”, which the band points to as the inspiration for the album), it gives the impression that we’re speed-reading through the dark rituals. The inclusion of someone on synthesizer for harsh texturing, or just a keyboardist for ethereal arpeggios, could have done wonders in lifting the group to another plane and communicating some of the invocational energies presumed to be in play.

That said, that objection is predicated entirely on the assumption that you’re going into this knowing, or even caring, about the band’s narrative intent with the concept album. Drop that off, and you’ve got an enjoyable, if somewhat opaque and repetitive, LP of blistering modern black metal. And there are some moments to get stuck in your head (the high-pace marching opening of “The Arrival of Noctifer”, for example). Ignore the liner notes, and you should be able to have an enjoyable enough go with this album, as long as you don’t want too much variety to your black metal servings.

Nox Formulae – Drakon Darshan Satan
THE BOTTOM LINE
A decent enough black metal album, one that probably would have done better if it had been released without playing up its alleged inspiration too much.
Reader Rating0 Votes
POSITIVES
High energy
Good interplay
Clean production
NEGATIVES
Fails to meet the album's conceptual promise
Feels limited in scope, style, and range
3.5